Paolo Ercolani reviews Costas Lapavistas and Heiner Flassbeck’s Against the Troika, which argues that the only possible strategy for contesting Europe's tyrannical austerity policies—as well as the rise of the far right—involves taking seriously possibility of leaving the euro. From il manifesto (18 June), translated from the Italian by David Broder. 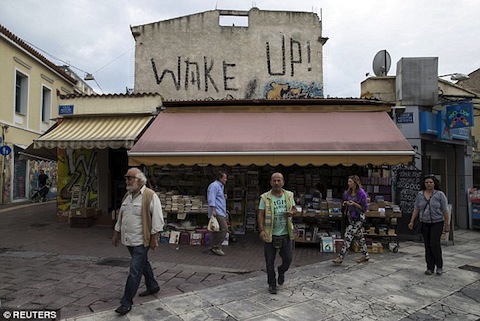 In De oratore Cicero spoke of history as the "light of truth" or the "life of memory", yet only rarely does it prove to be what he called the "teacher of life". After all, the human world has no intention of becoming history’s disciple, or even just of paying attention to the powerful lessons that it gives us.

Such is the case of economic theology, that is, the idea (or better, the ideology) that attempts to impose the dogmas of finance in the guise of unquestionable natural laws, perfectly able to guarantee the salvation or even the progress of those countries that submit to "market fundamentalism".

And we would not have to test our memories too far (going back to Marx or Keynes) to get a perfect, obvious example of the fallacy of the diktats imposed by market fundamentalism – we need only look at our own time. Or, to be more precise, to look at what happened a few years before the great economic crisis also struck the Western world, starting from the United States and then breaking out across Europe in 2008 and 2009.

Not just any-old witnesses provided indisputably lucid documentation of the failures that market dogmas had produced; Joseph Stiglitz (who, as well as being a gifted economist, was also vice-president of the World Bank during the Clinton presidency) insightfully spoke of the causes of these failures, and for this he was awarded the Nobel prize for economics in 2001.

Indeed, in a book that is of fundamental importance for understanding our time, Globalization and Its Discontents, Stiglitz provided a precisely-detailed, incontrovertible analysis of the collapse of the countries (for instance Argentina) that were subject to the global troika (IMF, World Bank, WTO) in the 1990s. Whereas in those same years China, for example – one of the countries that disdainfully rejected these impositions (also because it was able to do so, in virtue of its military power) – laid the bases for it to explode onto the world stage as an economic power.

Around a decade later, after the unforeseeable developments of finance capitalism had witnessed the growth of precisely those countries who had opposed neoliberal dogmas (China, but also India and Brazil), it was now Europe’s turn not only to deal with a very serious and prolonged phase of stagnation and crisis, but also with the very same diktats with which economic theology claims to offer the route to salvation.

By means of a new and particular troika (the European Commission, the ECB and the IMF), the vague and incomplete entity that answers to the name "Europe" found itself faced with the most dramatic déjà vu of its recent history. It could ignore the past and submit to the diktats that had led to disaster and widespread poverty everywhere that they were applied, or else stand strong against them and construct an alternative solution.

In a recent book (Against the Troika: Crisis and Austerity in the Eurozone, foreword by Oskar Lafontaine, preface by Paul Mason, afterword by Alberto Garzón Espinosa), Heiner Flassbeck and Costas Lapavitsas frankly speak of the "remarkably strong correlation between the adjustment demanded by the troika and economic decline in the peripheral EMU countries" (above all Greece). They also refer to the cases of France and Italy, which though not peripheral are subject to very powerful reductions in their respective economies and, above all, in the quality of life of the citizens living in these countries.

The two scholars starkly portray the crossroads that the European democracies now have in front of them. However, according to the authors, this seems doomed to take on the traits of a false choice, or rather, of a vicious circle: on the one hand, giving in to the Troika’s diktats means further increasing inequality and impoverishing the middle class, laying the basis for a massive increase in the discontent and social conflict that populisms, nationalisms and the far Right are ready to exploit, with ever more damaging results.

On the other hand, faced with so-called Left governments – but more generally, forces opposed to capitalism – that are proving unable to elaborate and put to work alternative strategies, the field is inevitably left open to the exclusive implementation of solutions that are doomed to destroy once and for all what little remains of the (incomplete) unity of Europe. That is, effectively creating the conditions where the only forces still fighting each other (and are they really fighting?) are the populist Right (with their simple programme: leave the euro) and the market fundamentalists.

The results are harmful ones in either case: as the book tells us, "In short, the accumulated divergences during the first years of the EMU and the terrible nature of the adjustment programmes have put the very survival of the EU in question … The prospect of disintegration and eventual collapse of the European Union can no longer be ignored." From this point of view, for the two authors of Against the Troika, it is clear that it is up to the varied and often fragmented galaxy of the anti-neoliberal Left to rebuild a popular consensus. That is, a popular consensus for declaring a default on the debt, suspending the payment of the interest that has accrued, and renegotiating the forms of EU integration.

In short, only a renovated, bold Left, with a well-founded and credible programme, can seriously challenge market theology and succeed in keeping alive the great project that is Europe (safeguarding its specificity, at the global level: the welfare state). But it should do so in the full awareness that the prospect of leaving is neither forbidden in advance nor unimaginable.

- Against the Troika is available for download as an e-book (£3 on our website), and due to be released as a paperback in September