Appeal in support of the La Chapelle migrants

A petition created on the initiative of the Collectif de soutien des migrants de la Chapelle, which has already been signed by a number of intellectuals and artists, including Verso authors Etienne Balibar, Eric Hazan and Sophie Wahnich, calls for a general mobilisation: "We will fight for them but also to defend our society, faced with this aggression by the public authorities. We are determined to make sure that the wrongs perpetrated against our migrant sisters and brothers are undone, and that in our country human dignity and the right to asylum are respected". Translated by David Broder. 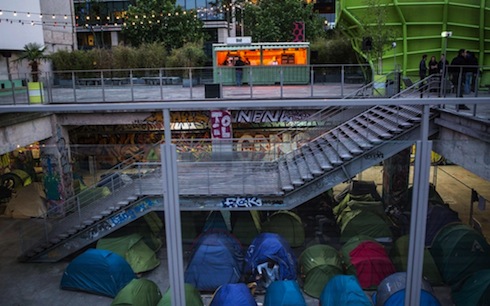 Many hundreds of migrants coming from various African countries, fleeing the untenable situations in their respective lands, had been living under the La Chapelle overhead metro station since August 2014, before the so-called "sanitary and humanitarian" measures carried out on 2 June 2015. Here we will not delve into the dirty details of this operation; but it meant that the migrants’ encampment was cleared out and entirely destroyed.

On 8 June a new encampment set up at the Halle Pajol, in Paris’s 18th arrondissement, was in turn cleared out by the CRS. This police operation was particularly violent, using truncheons, gas and tasers against refugees, local residents, activists, and elected officials, even though all of them were resisting by peaceful means. Around forty migrants were handed an "Obligation to Leave French Territory" (OQTF) notice and locked up in detention centres. The decisions to expel them from France are all revolting, and they are all the more abject in that Eritreans and Sudanese people (who together make up the great majority of the La Chapelle migrants) are in practice un-expellable, considering the proven dangers that they would face if they were to return to their countries of origin. Moreover, the European Court of Human Rights condemned France on 15 January 2015 on precisely these grounds. In fact, these OQTF will be either cancelled by the administrative tribunal or abrogated by the prefecture, or else they will simply go unapplied. The migrants will then be put back on the streets, and will again face a condition of uncertainty, precariousness and the insecurity associated with police controls.

On 11 June the Association du Bois Dormoy, not wanting to take on the public authorities’ responsibilities, told the migrants and their supporters to leave; and these latter decided that they had every right to occupy the disused Château Landon barracks, for want of any satisfactory proposals from the authorities. Negotiations then took place between the representative of the Paris mayor’s office, elected representatives from the Front de Gauche (including a translator), and the now-unsettled migrants, amidst a climate of moral pressure and police repression that was entirely at odds with any kind of calm negotiation. The result was that the migrants had to quit the occupied barracks, in exchange for a promise of serious progress in 110 of the refugees’ housing situation and asylum application process (that is, excluding all the other refugees who had not come to the barracks, whether for fear of fresh police violence or for any other reason). This promise was to be realised within an "indeterminate period".

Given the deplorable conditions of the Nanterre lodging centre where 80 out of the 110 were sent (with groups of 8 people placed in rooms designed for 4, and even having to sleep on the floor; unhygienic sanitary facilities; and more problems besides), many of the migrants felt a fresh blow against their dignity. Once more betrayed by the authorities, they preferred to return to sleeping in the streets.

Today in Paris a number of street encampments (at the Jardin d’Eole, at the Quai d’Austerlitz and the Gare de l’Est...) shelter hundreds of migrants who have been abandoned by the state.  Thanks to their unity and the help that they have received from associations and from local residents, these men, women and children have managed to eke out an existence: a precarious one, but also one based on solidarity.

We, French and European citizens and foreigners living in France, denounce this lawless situation, which the authorities are at blame for keeping going. We alone, and not the state, have defended the principles of liberté, égalité, fraternité; indeed, we might legitimately ask whether the state still represents us, when it violates human rights and rides roughshod over human dignity.

We condemn in the most unequivocal terms the police violence that has accompanied each of the interventions that the forces of order have made, as well as the systematically orchestrated effort to dehumanise these migrants. Having for ten days remained powerless witnesses to the authorities’ contempt and obstinacy – together with the moral distress that this engenders – we are now calling for lasting solutions and immediate action to deal with each of these migrants’ situation, in order to secure their right to asylum, regularisation for all, and a dignified and permanent answer to their housing needs.

We affirm our total commitment to the migrants and our solidarity with them. We will fight for them but also to defend our society, faced with this aggression by the public authorities. We are determined to make sure that the wrongs perpetrated against our migrant sisters and brothers are undone, and that in our country human dignity and the right to asylum are respected.

1. The collective regularisation of the migrants at La Chapelle, Austerlitz, Calais and elsewhere who do not have permits to stay, as well as housing worthy of the name, for all;

2. Facilitated and wider access to permits to stay, in order to guarantee migrants dignified working and living conditions;

3. Get rid of the Dublin Regulation, in order to allow those applying for asylum a free choice of the country in which they want to make their home;

4. Freedom of circulation and residency in the Schengen zone and beyond, such that migrants are not restricted in their movements;

5. The preparation of reception accommodation for the migrants, as the Paris mayor’s office promised during the "negotiations" over the barracks. This "migrant house", an associative site whose organisation will actively involve the migrants themselves, will be devoted to receiving and lodging migrants, helping them take the steps they need and putting to work the solidarity of local residents – which must necessarily make up for the inadequate support that is coming from the institutions. This site will play host to associations’ offices and it must, imperatively, be situated in Paris (within the city itself, not beyond the périphérique); preferably in the La Chapelle neighbourhood, where migrants have traditionally come together. We are determined to proceed with this solidarity movement, giving life to this "migrant house" together with – and with respect for – the migrants themselves; and we are determined to make sure they are not relegated outside of the city, outside of our areas or our lives.

6. Finally, we demand a public apology from the Interior Minister for the unacceptable violence that the forces of order used against the migrants and their peaceful supporters, in particular during the round-up at Pajol.

Click here to make a donation to the citizens’ and migrants’ collective in charge of the Jardin d’Eole encampment (in the 18th arrondissement).