Verso Classics: back in print and 40% off!
9 days left
Miri Davidson
comments

Costas Lapavitsas: "Greece is being blackmailed. Exiting the eurozone is its way out"

When Syriza was elected, it was hoped that its strong democratic mandate might be respected in negotiations with its creditors. Instead, they have attempted to force on it the same devastating austerity policies that have caused its current humanitarian crisis. As Costas Lapavitsas argues for the Guardian, the first radical challenge to austerity in Europe should not allow itself to be blackmailed into remaining in the euro. 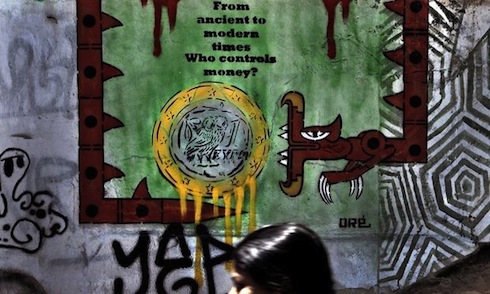 A few days ago the Greek government submitted a list of proposals hoping to break the deadlock with the “institutions” – the European Commission, the International Monetary Fund and the European Central Bank. The government basically agreed to tough primary surpluses: 1% in 2015 and 2% in 2016. To achieve these targets it proposed to raise VAT on a range of widely consumed goods as well as imposing a host of taxes on enterprises and families of “high” income. It also proposed substantial savings on pensions. The measures added up to roughly €8bn over 2015-16, and would be immediately implemented.

The package is certainly deflationary at a moment when the Greek economy is again on the threshold of recession. There is little doubt that it would contribute to output contraction and higher unemployment in 2015-16, particularly as there is little prospect of being offset by an investment programme funded by the EU. It is a major retreat by the government of Syriza.

To general astonishment, the response of the “institutions”, led by the IMF, was to demand even tougher measures to achieve the same targets. These include more severe increases in VAT, a lessening of the tax burden on enterprises and greater pension savings. If these demands are met, the government will not even be able to claim that it has shifted some of the increased tax burden away from workers and the poor.

For Greece as a whole, the prospect of a deal achieved on this basis would be simply appalling. The country would be forced to adopt harsh austerity measures dictated by the lenders, without any realistic possibility of substantial debt relief, or of a significant investment programme. The “institutions” are once again attempting to impose the policies that have failed abysmally since 2010, causing huge contraction of GDP, vast unemployment and mass impoverishment. It would be a national disaster accompanied by the complete humiliation of the Syriza government.

For those who look at the European Union without rose-tinted glasses, there is no surprise regarding the attitude of the lenders. The EU and the eurozone in particular are in thrall to austerity, even institutionalising it through the so-called six-pack and two-pack. The lenders have inevitably objected to lifting austerity in Greece, and appear to believe – foolishly – that austerity “works”. Furthermore, they are keen to inflict a political defeat on a leftwing government that has dared to challenge the European status quo. Europe has shown a harsh and cynical face toward Greece, whatever might be the faults of Greece itself.

The real question is, will the government of Syriza accede to these extraordinary demands? Will it submit to blackmail? Syriza won the election in January 2015 with a strategy that promised to lift austerity and bring radical change to Greece, while remaining within the eurozone. It believed that its strong democratic mandate would help it succeed in tough negotiations with the lenders. Reality has proved to be very different as the lenders have used the framework of the eurozone to create a liquidity and funding shortage that has crippled the Greek side. At the same time, both the lenders and the domestic forces that wish to continue with the policies of austerity – including, mostly, the rich and the financial elite – have been scaremongering shamelessly about Grexit. Faced with the power of the purse, the strategy of Syriza is unravelling.

Greece and the government of Syriza have now come face-to-face with the ruthless reality of the eurozone. To keep the country in the monetary union, the lenders are demanding that it should submit to blackmail and accept policies that would lead to national decline. Greek society would face low growth, high unemployment, entrenched poverty and emigration of its skilled youth, as the experience of the last five years has shown.

There is an alternative path for Greece, and it would include leaving the eurozone. Exit would free the country from the trap of the common currency, allowing it to implement policies that could revive both economy and society. It would open a feasible path that could offer fresh hope, even if it entailed significant difficulties of adjustment during the initial period.

The choice ultimately rests with the Greek people. Despite the frequently reported polls presumably showing strong support for the eurozone, the reality on the ground is anger and frustration among workers, the poor and the ravaged lower-middle class. These are the social layers that could put the country on a different trajectory of growth with social justice. In this respect, it is incumbent upon Syriza to rethink its strategy and offer fresh leadership to the Greek people. In the coming days a significant intervention by its influential left wing, the Left Platform, can be expected. Greece needs a rapid public debate and a reshaping of policy. The country has the strength to survive and it will.

- Heiner Flassbeck and Costas Lapavitsas' Against the Troika is the first book to propose a strategic left-wing plan for how peripheral countries could exit the euro.