On 25 January 2015, Syriza, the radical Left coalition lead by Alexis Tsipras, won a historic election victory winning just two seats shy of an absolute majority in the Greek parliament.  As Etienne Balibar observed at the time:

“This is the first time that any popular force has proven able to pose a challenge to the ‘governance’ that has dominated Europe ever since the ‘neoliberal’ turn. This rupture is taking place in a ‘small country’, but the Greek experience has its echoes everywhere."

The election was won on the back of a campaign that promised to renegotiate the terms of the country's bailout by the European Union, in stark contrast to Northern European ideology of austerity.  Syriza's election win sent shockwaves throughout the international money markets, with the European Central Bank implementing credit controls on Greek banks, restricting its cash flows and making prohibitively expensive for those banks to access capital.  After months of negotiations between Greece and its creditors, there has been an impasse, with Germany and its Northern European aliies unyielding despite extensive concessions given by Syriza on the conditions of its €8bn austerity package.

On 27 June, Tsipras called a referendum to decide whether or not to accept the bailout conditions given by the EU.  It is a gutsy decision that took much of the world by surprise.  A 'No' vote would galvanise Syriza and give it a public mandate to bolster its position against the country's creditors, whereas having its own subjects voting 'Yes' to extensive cuts would deliver perhaps the punishing final blow to any credible alternative to austerity in the Eurozone.

With this in mind, we bring you an essential reading list that aims charts the trajectory of Syriza from its origins as a loose coalition on the fringes of Greek politics to being the only credible party on the European Left that is openly fighting back against the violent ideology of austerity. 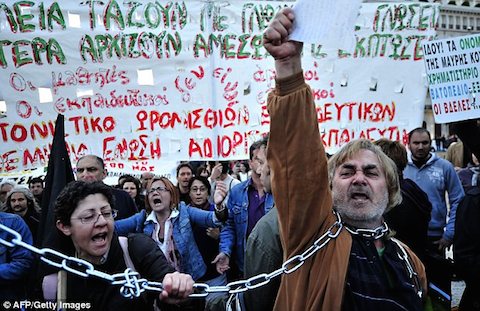 "Syriza is the fruit of a recomposition process that transformed the political space to the Left of social democracy, from the 1970s onward."
- Stathis Kouvelakis, author of Philosophy and Revolution: From Kant to Marx, looks at the origins of the Syriza phenomenon in this interview with Nouvel Observateur.

"These left-wing movements – so it seems now, savour it while you can – don’t have to rely on street protests to get what they want. They can get it through an instrument long considered by socialist radicals to be redundant: the ballot box."
- James Meek, Orwell Prize-winning author of Private Island: Why Britain Now Belongs to Someone Else, is tentatively hopeful about Syriza's January election victory in this piece on the LRB blog.

"In periods of great crisis, voters’ political shifts are motivated by disillusionment, anxiety, anger, but also a party’s capacity to offer a different perspective for resolving the crisis."
- Gerassimos Moschonas, author of In the Name of Social Democracy, charts Syriza's rise to government in Le Monde.

"The Left at long last must begin to table ideas about genuine internationalism in Europe that reject these forms of capitalist integration. Not improve them. Reject them. That’s the real radical outlook for the Left, and that is what it should do."

- Costas Lapavitsas, Syriza MP and author of Against the Troika: Crisis and Austerity in the Eurozone, reflects on the Greek social movements and the international Left's part to play.

"There is no middle way. The Eurozone will not allow it."
- Costas Lapavitsas gives a stark warning on its progress with negotations in a Eurozone framework in a joint interview with German daily Der Tagesspiegel and ThePressProject International.

"Greece is being blackmailed. Exiting the eurozone is its way out"
- Costas Lapavitsas, writing in the Guardian, shows defiance in the face of intense pressure for Greece to remain in the Eurozone and accept austerity.

"To authoritarianism and harsh austerity, we will respond with democracy, calmly and decisively."
- In a landmark speech, published by Jacobin, Greek Prime Minister Alexis Tsipras announces that a referendum will be held on the Troika bailout deal on 5 July.

- You can view all of our extensive archive of blogs on the Greek Eurozone crisis by selecting the #Syriza tag on our blog.

The Extreme Centre: A Warning - Tariq Ali
In Ali's recent polemic, it is not the 'Extreme Right' and 'Extreme Left', with its marginal fanaticism and weak power base, that has unquestionably debased and dehumanised vast swathes of the world, but the Extreme Centre in the US and the EU, with unquenchable thirst for war, particularly in North Africa and the Middle East, and its unerring loyalty to "unremitting capitalism" that represents the most potent and violent extremism.

The New-Old World - Perry Anderson
Anderson casts a corruscatingly skeptical eye on the development of European politics since the Cold War, puncturing the pomposity of the ostensibly benign European Union.

Against the Troika: Crisis and Austerity in the Eurozone - Heiner Flassbeck and Costas Lapavitsas
Written just before Syriza's ascent to power in Greece, Against the Troika is a small manifesto on what a left-wing government can do in defiance of the EU.  The thrust of the book's argument is 'why should we pay for their crisis' and one that should surely resonate with those experiencing the brutalising effects of austerity.

Crisis in the Eurozone - Costas Lapavitsas
A clarion call from the Professor of Economics at SOAS and current Syriza MP against the European economic policies of austerity, privatisation and liberalisation.  In this urgent account of the spectre haunting the European Union, Lapavitsas takes a knife to the soft veneer of EU respectability and exposes the violent ideology of austerity within.

Profiting Without Producing: How Finance Exploits Us All - Costas Lapavitsas
This landmark book is an exceptional analysis of finance and economy from a fiercely Marxist perspective.  Not only does this book chart the history of Marxist monetary philosophy but its application to the biggest economies, namely the U.K., Germany, Japan and the US and its regular crises, spanning up to the US financial collapse in 2008 and the Eurozone's current deep malaise.

Old Europe, New Europe, Core Europe: Transatlantic Relations After the Iraq War - Edited by Daniel Levy, Max Pensky and John C. Torpey
Published over ten years ago in the aftermath of the Iraq War, this anthology, with contributions from Susan Sontag, Jacques Derrida, Umberto Eco amongst many others, suggests that Europe found a common identity, forged from the streets during mass protests, against deeply unpopular military intervention propagated by the United States. As the brutalisation of Greece by the EU in the name of 'austerity' continutes unabated, will there be a popular uprising on the streets in 2015 as there was in 2003?

Ruling the Void: The Hollowing of Western Democracy - Peter Mair
An extraordinary treatise on the fundamentally undemocratic nature of Western politics, where that has been a proliferation of agencies threatening to replace the national state.  Treading a line between political science and activism, Mair outlines confronts these non-democratic organisations such as the EU and that contradict and destroy the voice of the people.

Meltdown - The End of the Age of Greed - Paul Mason
Mason's penetrating analysis from the ground, evident in his accessible and yet comprehensive blogs and tweets, has crystallised the Greek economic crisis for many in his role as Economics Editor for Channel 4.  The End of the Age of Greed is the essential primer on the global financial crisis, and the bitter recriminations of neo-liberal ideology that are still resonating today.

Buying Time: The Delayed Crisis of the European Union - Wolfgang Streeck
A thorough, analytical account of the financial crisis from the European perspective that explains why the meltdown, borne from decades-long neoliberal ideologies implemented and enforced across the Eurozone, highlight fundamental problems and contradictions with democratic capitalism.

The Global Minotaur: America, Europe and the Future of the Global Economy - Yanis Varoufakis
Written by the current finance minister for Greece and published by our comrades at Zed Books, this is an eviscerating account of the economic superstructure that is not only culpable for the current deep Eurozone nadir, but for all of the economic ills since the Great Crash in 1929, where the Global Minotaur of neoliberal ideology was first conceived.

Greece in chaos: will Syriza’s last desperate gamble pay off? by Paul Mason