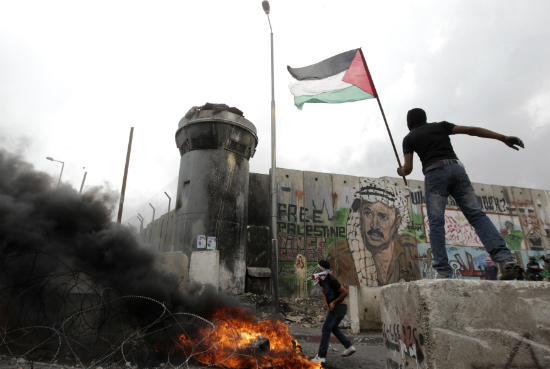 When we launched the beta-version of Jadaliyya in Fall 2010, we had an idea about what it should be, but nothing was set in stone. That flexibility has proven to be Jadaliyya’s secret ingredient so to speak. Since its establishment, Jadaliyya has organically developed into the institution it is today featuring 6 country/region pages, 15 thematic pages, and 3 Arabic pages each led by a stellar group of Co-Editors. Today that organic development continues with the launching of a new Palestine page and the renaming of the Occupation, Intervention, and Law (OIL) page as Law and Conflict.

The obvious question is why is Jadaliyya just launching the Palestine Page now- nearly 4.5 years after its establishment? That’s because we have always featured Palestine-related works from essays on culture, political economy, history, refugees, war, film, culture, breaking news as well as roundtables, book reviews, interviews, lectures, and newly released reports. All of them have been filed under the OIL page in part to highlight that the exceptional nature of Palestine is in fact the norm. At this juncture, however, we have found that the critical mass of Palestine material has drowned out the rest of the critical pieces on OIL. In order to properly highlight all of this material – we have divided OIL into new pages: Palestine and Law and Conflict.

It is no coincidence we are launching these pages on year to the day that Israel launched its most recent large scale military offensive against the Gaza Strip. Thus, 7 out of 8 of the Palestine page’s inaugural posts cover Gaza. Several of these cover the ongoing humanitarian crisis in Gaza. These include posts by the Office for the Coordination of Humanitarian Affairs as well as the United Nations Relief Works Agency. In their contribution, Nuriya Oswald of Al Mezan and Harvard Professor, Sara Roy, discuss how the aid scheme, particularly the Gaza Reconstruction Mechanism, work to entrench Israel’s oppressive control over the coastal enclave. Jadaliyya Co-Editor, Max Ajl critically responds to these pieces by examining the limits of humanitarianism and extrapolates how concepts of “crisis” and “collapse” have de-politicized and obscured Israel’s settler-colonial regime. In my contribution, Permission to Kill in Gaza, I examine how Israel’s novel rules of engagement in armed conflict have expanded its right to kill and diminished protection for Palestinian civilians. Finally, in Nathan Thrall’s Quick Thoughts post, he discusses the mood of Palestinians in Gaza, the status of Hamas in the region, as well as the prospects for another war. In an indication of what is to come on the Palestine page, we also published an interview with Eyal Sagui Bizawe by Alex Shams on Arab film on Israeli television that highlights the condition and role of Mizrahim or Middle Eastern Jewish-Israelis.

The Law and Conflict page includes nearly all of these essays and more. Its inaugural posts include two self-reviews, uniquely known to Jadaliyya as New Texts Out Now (NEWTON). Those NEWTONs feature Wolfgang Kaleck’s Double Standards: International Criminal Law and the West and The Human Right to Dominate by Nicola Periguini and Neve Gordon. The new page also features an essay by Jadaliyya Co-Editor, Lisa Hajjar who discusses how the US judicial branch has enabled the Obama Administration to keep details of its targeted killing program a secret- most notably from an American public.