Happy Bastille Day! - Eric Hazan on the 'the most famous event in the French Revolution' 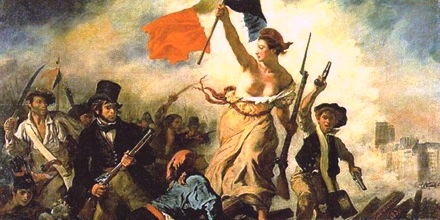 On the morning of 14 July, the cry ‘To the Invalides!’ was heard outside the Hôtel de Ville. Éthis de Corny, the city procureur, set out at the head of a procession in that direction. The ambassador of Saxony recalls:

The Hôtel des Invalides, in full view of the troops camped on the Champ-de-Mars, was taken by seven or eight thousand unarmed townsmen who emerged furiously from three adjacent streets, and hurled themselves into a ditch twelve feet wide and eight feet deep, which they rapidly crossed by standing on each other’s shoulders. Arriving pell-mell on the esplanade, before the veterans knew what was happening, they seized twelve pieces of cannon and a mortar. They then presented the governor with an order from the city to hand over all weapons, and no longer seeing any way to defend his building, the governor opened its doors. They seized 40,000 muskets and a powder magazine.

After witnessing this incredibly speedy operation, I crossed to the adjacent camp, where the spectacle of sad, dull and defeated troops, who had spent two weeks shut up in quite a narrow space, struck me as different from that of the enterprising and courageous men I had just left.

At the same time, deputations from the districts and the electors arrived at the Bastille and urged the governor, De Launay, to hand over the fortress’s arms and withdraw the cannon that were threatening the faubourg Saint-Antoine. The discussions dragged on as the people massed around the fortress, and finally, after the garrison had fired on the representatives, the assault began. What followed has been repeatedly described: the first drawbridge taken, the crowd in the courtyard under fire from the towers, the artisans from the faubourg reinforced by the gardes-françaises bringing up their cannon to break down the gates, and at last, around five in the afternoon, the surrender of the Swiss Guards and the veterans of the garrison. The battle cost a hundred lives on the side of the attackers and a single death on the other side. De Launay, who was (wrongly) held responsible for the order to fire on the negotiators, and Flesselles, who was (rightly) condemned for having deceived the people about the arms stores, were killed on the place de Grève, and their heads paraded on pikes.

To wage a street battle and retake Paris, Louis XVI would have needed an army such as he did not have. And Paris was not the only cause for alarm: news arriving from far and wide indicated that the whole country was rising up. The king accordingly had to retreat. On 15 July, he came to the Assembly and announced that he had ordered the troops to leave both Paris and Versailles. The next day, after a new representation on the part of the Assembly, he reinstated Necker and the ministers who had been sacked along with him. In Paris, the archbishop had a Te Deum celebrated in Notre-Dame. Bailly was appointed mayor of the city, and Lafayette commander of the force that would soon become the National Guard. On 17 July, the king agreed to come to Paris. His presence on the balcony of the Hôtel de Ville, where Bailly handed him the new tricolour cockade, sealed the victory of the Paris insurrection. The king, after fixing the cockade to his hat, said only: ‘You may always count on my love.’

The storming of the Bastille is the most famous event in the French Revolution, and has moreover become its symbol throughout the world. But this glory rather distorts its historical significance. It was neither a moment of miracle, nor a conclusion, nor a culminating point of the ‘good’ revolution before the start of the ‘bad’, that of 1793 and the Terror; the storming of the Bastille was one shining point on the trajectory of the Paris insurrection, which continued its upward curve on 10 August 1792 and 31 May–2 June 1793, before falling tragically back again after Thermidor, with the hunger riots of Prairial in year III.

Eric's book The People History of the French Revolution is available to buy from the Verso website with a 30% discount, free shipping and a free bundled ebook.