A France For All, by Alain Badiou, Sylvain Lazarus and Natacha Michel

Alain Badiou, Sylvain Lazarus and Natacha Michel examine the round-up of the sans-papiers in France, tracing it back to the tradition instated by the Vichy government when it called on Jews to register at the prefectures, the selfsame, shameful practice by the government "of lying and surveillance." The following post was orginally published by Le Monde on 9 December, 1997, and is translated by David Broder. 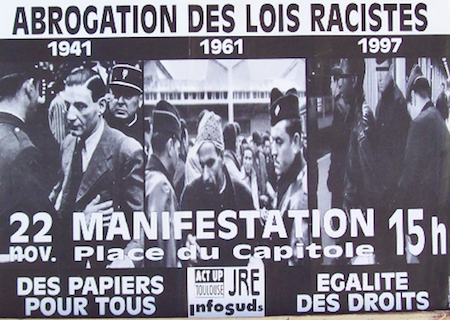 A government calls on people to come and register en masse with all their relevant documents: their residence and work papers, their entry visas, and so on. This government says that it’s a matter of regularising the situation of workers who’ve come from abroad. People had some reason to believe what this government was saying: with the great movement [including the occupation of the Church] of Saint Bernard, unregularised immigrants had clearly declared their existence as individuals and families. There were mass petitions and demonstrations against the repressive laws and police powers introduced by the previous government, centred on expulsion. All this was of major assistance to the election of the new government, which stated that it would abrogate the repressive laws and regularise the unregularised.

So people went to register en masse. A few months later, the situation is as follows: the previous laws have not been abrogated; a new bill continues to revolve entirely around expulsion, defining people who live here in terms of their expellability; a very small proportion of those who showed up to register were regularised. The others, perhaps more than a hundred thousand in number, are awaiting or –in most cases – have received or will receive notification that they have to leave French territory promptly. Indeed, this notification will reach them all the more easily now that they are on file. The authorities know all about them. For good measure, they warn their employers (of which they are now aware) that they have to sack them.

What name ought we give to this government practice? A practice of lying and surveillance. And whatever the differences in their consequences, we have to admit that this stands in the tradition established by the Vichy government, when it called on Jews to register at the prefectures. The Jospin government will effectively have created a repugnant police file listing the sans-papiers.

Once this file has been produced, what will come of it? It’s easy to forbid those on file from working. To arrest them. To mount major police raids to identify the people on file and drag them to detention centres, which stand outside of any acceptable law. The process is completed through their expulsion.

What should we call these practices? They are round-ups. And whatever the difference in their extent and circumstances, we have to say that they are in the tradition of the round-ups ordered by the likes of Maurice Papon, when French policemen dragged the Jews to the transit camps.

Indeed, the round-up is the inevitable consequence of the police file. That’s what we saw even after Vichy, in the terrible years of the Algerian War. A file of Jews, a file of Algerians, a file of sans-papiers: it is the same principle.

But nothing tells us that all this will pass through so easily. Lionel Jospin ought to remember that Alain Juppé’s fall owed to the strikes of December 1995, and the movement of the sans-papiers and their friends. Today the workers of the foyers [migrant hostels] are rising up, declaring ‘Papers for all, a France for all’.

And they also say: ‘Jospin, traitor, Jospin, chameleon’. Their movement will expand. It will last. And the sans-papiers’ friends say that the state is democratic if – and only if – it is the state for all, if it counts each person as a person, and not some people for a lot and others for nothing.

This isn’t a matter of the mythical ‘opening of the borders’ or the chatter about North and South or the ‘new economic order’. At issue is the question of how the state treats people who work and live here, a lot of them across many long years. It is a question of domestic policy, of the relation between the state, the people who are here, and the principles that organise this relation. Of the real content of democracy. Defining foreigners on French territory in terms of police files, raids and expulsions, can only ever resonate with the sinister vision of ‘the French’ propagated by the Front National.

Today, in the present situation, to be an active friend of the sans-papiers, armed with a few simple principles, is the very definition of democratic subjectivity. Those who call this ‘moralising’ or ‘over-idealism’ are but covering the practices of police files, round-ups and expulsion with the moth-eaten cloak of its debasement.