What is "the behaviour of a client"?

Syvie Tissot reflects on the renewed justifications for rape that emerged through the recent acquittal of Dominique Strauss-Kahn. Translated by David Broder; see the French original here. 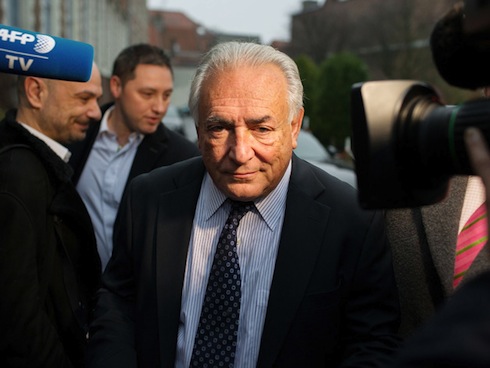 We are hardly surprised at the outcome of the Carlton trial and Dominique Strauss-Kahn’s acquittal, yet we are also angered and disgusted. His impunity is total. But there’s also the painful feeling that certain feminist conclusions drawn from these scandals – the supposed need to criminalise prostitutes’ clients – are not the right ones. They are based on a reading just as biased as the court’s was.

According to the tribunal president, Dominique Strauss-Khan ‘claimed to be ignorant of the presence of prostitutes and the fact they were being paid’. But ‘even if he was aware of this, he was no more than the beneficiary of a group sexual service … So like the other members of the group, his was the behaviour of a client’.

But what do the prostitutes tell us about Dominique Strauss-Kahn’s ‘behaviour of a client’? Many spoke of how he forced them into sexual acts of incredible violence. Of how, when they refused certain acts, he held them down – if need be, with the help of an accomplice – in order to get his way. DSK called this ‘rough sex’, though in plain speaking we ought to call it rape [1].

The judgement says that the fact of being a prostitute’s client is not a crime – and indeed it is not – but that is not all that it says; the statement it really made, and which is a much graver matter, is that rape is part of what could be called ‘the behaviour of a client’. In other words: raping a prostitute is not a crime.

It is also interesting that the journalists covering the Carlton trial have only rarely used the word ‘rape’. As if, here too, it couldn’t apply, just as it can never apply to rich white men, and in particular to politicians, who, by definition, cannot be rapists, as young men in the suburbs would be. Let’s remind ourselves that DSK didn’t ‘rape’ Nafissatou Diallo: he was a ‘seducer’ and a ‘libertine’.

In reality, these men’s impunity is just the other side of the stigmata the ‘whore’ has to bear. Since they are ready to ‘sell their bodies’ – that is, profoundly venal and immoral – prostitutes cannot be subjects, capable of expressing their consent or of saying no: they are always presumed to be consenting [2].

But as Thierry Schaffauser has emphasised, prostitution is not ‘the act of paying in order to get women’s consent to be raped’. Being raped is a very different thing indeed to engaging in a relation that is paid and negotiated (even if a service is given for a certain price). And who knows that better than prostitutes themselves? So there is not one ‘behaviour of a client’ limited to the ‘roughness’ DSK is talking about.

Not only does the association between prostitution and rape fail to give account of the reality of prostitution, but, criminally, it perpetuates and legitimises police indifference to the violence to which prostitutes are subjected. And it is no less dangerous coming from the mouths of those feminists who use this association as the basis for demanding the criminalisation of the clients. Certainly, prostitution – alas, like so many activities that women engage in – can be violent. And we know the power of metaphors, even hyperbolic ones, to characterise violence – apartheid, war, slavery… these are so many words that we need in order to shout out our anger and make ourselves heard. Even if they do not perfectly account for the resistances and complex forms of power involved. Yet even so, it is imperative to preserve the distinction between rape and prostitution if we want to fight against the worst violences that prostitutes suffer in the here and now, and in the first place, against rape. Whether prostitution as a phenomenon is accepted or condemned, presented as a form of libertinism or erected as the ultimate symbol of male violence, the equation prostitution=rape masks this worst form of violence and undermines the fight for prostitutes’ safety and for their rights.

What we have to demand, now that DSK has been acquitted, is not, certainly, the criminalisation of clients, but a true fight against rape. Not by the criminal and moral disqualification of paid-for sex – a narrowly symbolic operation, which is all the more pernicious since as feminists what we want to change are power relations.

For now, the lesson from this whole affair is that rich white men – the most powerful – can escape with total impunity from – as DSK put it – being ‘rough’ with prostitutes, as with all women. And we might fear that once again women, and in the first place prostitutes, will be the ones to pay the price.

[1] The fact that no prostitute brought an explicit complaint explains why DSK was, unfortunately, prosecuted for aggravated soliciting and not for rape.