Costas Lapavitsas: The case for Grexit

Germany’s austerity policy is driving the EMU towards collapse, and will have devastated Greece long before that. A Greek exit from the euro would benefit all of Europe—and is gaining increasing support from the Greek people, writes Costas Lapavitsas for Le Monde diplomatique's July issue. 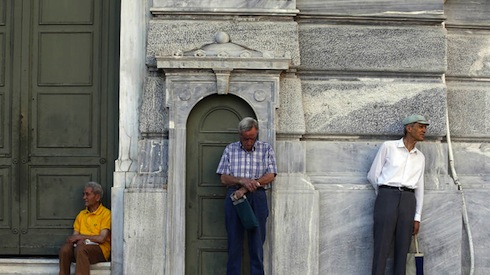 The prospect of a Greek default and exit from the Economic and Monetary Union (EMU) first arose during the eurozone crisis in 2010. From the perspective of monetary theory, Greece’s problem is plain: a weak economy with major institutional problems has joined a structurally deficient monetary union. This is the classic trap of a soft economy adopting a hard — and inherently problematic — currency. There are only two ways out: either the EMU must be completely overhauled, or Greece will have to consider defaulting on its debt and leaving.

The main cause of EMU malfunction is Germany’s policy of keeping nominal wages low, which has given it a great competitive advantage and enabled it to become a major lender in Europe. Adopting a neo-mercantilist approach, Germany has forced its domestic economy into a persistent weakness of demand while seeking to earn wealth by trading abroad. Ordinary Germans, especially wageworkers, have borne the brunt of a policy that favours big exporters and banks.

For other member states, Germany’s policy has resulted in a loss of competitiveness, and hence growing deficits and borrowing. This fundamental imbalance of the EMU was masked in the early 2000s by the availability of cheap credit, which promoted consumption and property investment. But the global crisis of 2007-9 exposed the problem and led to the general crisis in the eurozone. Greece was hit hardest because it had suffered the greatest loss of competitiveness, and faced a huge debt of more than €300bn, a vast current account deficit and an equally vast fiscal deficit, both more than 15% of GDP. The hard currency had ruined its soft economy.

Greece’s fate was sealed in 2010, when the EU chose austerity as the main solution to its problems, with wage cuts, spending cuts, tax increases, pro-market reforms, and the institutionalisation of austerity through measures such as the Six-Pack and the Two-Pack (1).

From a strictly German perspective, austerity shifts the costs of adjustment onto the deficit countries, while protecting the interests of the big banks and exporters. The German leadership appears to think that austerity will consolidate its dominant position within the EU. But from the perspective of the EMU as a whole, austerity depresses demand, leads to economic contraction, and offers no prospect to deficit countries of returning to surplus and paying off their debts. It is the surest way to cause the EMU to unravel in the medium term. And from Greece’s perspective, austerity is disastrous since the falls in output and income have been so great that it is locked into low growth, high unemployment and high debt. Germany’s policy is driving the EMU towards collapse, but will have devastated Greece long before that.

The Syriza government elected in January has long been aware of the catastrophic consequences of EU policies. It has been attempting to negotiate a deal for the lifting of austerity measures, debt relief and a programme of investment to boost the economy. The response of the creditors in June was ruthless: Greece must achieve a primary surplus (2) of 1% in 2015, 2% in 2016, 3% in 2017 and 3.75% in every subsequent year. There was no mention of debt relief or of any sizeable investment programme. This is severe and entrenched austerity.

Under these conditions, the outlook for Greece would be bleak. Average growth over the next five years will perhaps be around 2%, with significant fluctuations. Unemployment is likely to stay at very high levels, and there is no real prospect of a recovery in incomes, which have fallen by more than 30% for many. An already ageing society, laden with debt, will lose its better-educated youth to emigration. The ensuing geopolitical weakness is easy to imagine: Greece will dwindle into historical irrelevance.

If the EU insists on imposing these policies, Greece’s survival will mean defaulting on its debt and exiting the EMU as the first step towards reviving its production structure, boosting investment and restoring the welfare state. Greece would then be released from the euro trap, and potentially able to begin social change, economic growth, and redistribution of income and wealth. This would involve conflict with powerful interests both in Greece and in the rest of Europe. It would require great political determination and wide popular support.

The only political force capable of setting Greece on this path is Syriza. The party’s official position has long been that radical change could be achieved without exiting the EMU. But the inflexible attitude of Greece’s creditors has led its members and voters to revise their opinion. The view that default and exit ought to be considered seriously if the creditors are going to blackmail Greece is gaining support among working people, the poor and the lower middle class.

Strong opposition is likely to come from the upper layers of society, until now relatively unaffected by the crisis. They have a political voice in rightwing New Democracy and centre-left Pasok, which have alternated in government for decades, as well as the well-financed centrist grouping To Potami, which has recently come onto the political scene. The ruling elite have no vision for the country: they are content to follow the creditors’ roadmap. The social divisions inherent in the euro have become clear during the crisis, and will prove decisive in the coming period.

Exiting the EMU would not be easy, but monetary history and theory offer a route. Greece would suspend its membership of the EMU, without exiting the EU. The legal basis for this is straightforward: the treaties already include provision for exit from the EU. What applies to the whole (EU) would apply by analogy to the part (EMU).

Greece would suspend payments on public debt abroad — mainly to the International Monetary Fund and European Central Bank (ECB). Greece has the option of continuing to pay private creditors to facilitate its return to the markets in the future. The Greek government would propose an international conference to secure a restructuring of its debts, including to the IMF. The government would undertake to meet all its obligations to domestic agents in full.

Greece would take back control of its central bank, which would leave the Eurosystem but remain within the European System of Central Banks (3). The Greek banking system would be nationalised and new, sound, banks established. Provision would be made for restructuring problematic business, housing and consumer loans which have accumulated during the crisis and currently exceed €100bn. Capital and banking controls would be established, along the lines of EU controls on Cyprus in 2013, but without a haircut on deposits. Bank deposits and loans governed by Greek law would be converted to the new drachma at a rate of 1:1.

The new drachma would be devalued, probably quite significantly, in the first few weeks, and perhaps stabilising at 10-20% below par value after several months, bearing in mind that the Greek current account would be broadly in balance and that capital controls would be imposed. Empirical work shows that the effect on output and employment would be positive, while inflation would only rise modestly.

The needs of vulnerable social groups would be prioritised for key goods — especially petrol, food and medicine — but a minimum of preparation should make ration cards unnecessary.

Default and exit would come at a cost, particularly during the initial period. However, this would only be temporary, and less than the cost of the austerity needed to remain within the EMU.

The economy would be likely to go into recession during the adjustment period, which would probably last several months. Once the adjustment was over, Greece could expect sustained growth for a significant period, based on the release of pent-up domestic demand and on the mobilisation of the enormous labour, plant and equipment resources that are lying idle as result of austerity. On this basis, Greece could begin to plan urgently needed reforms of its economy and society, including a structural shift away from the services sector and towards industry and agriculture. Default and exit would make in-depth reform possible by restoring Greece’s monetary sovereignty and ability to generate liquidity from its own sources. Greece would also gain room for manoeuvre in its fiscal policy that would allow it to recommence public investment and support private investment.

Naturally Greece would have to defend the new exchange rate, but the resources needed would be nowhere near as extensive as those required by the straightjacket of the EMU. And monetary events of this kind generally create new opportunities for economic activity.

The cost of austerity in Greece has been borne overwhelmingly by wageworkers, pensioners, the poor and the lower middle class. A leftwing government could use default and exit to shift the costs of the crisis onto the shoulders of the better off and alter the balance of power in the country in favour of labour.

Exit would reduce the purchasing power of wages by making imports more expensive, but it would also reduce the real value of housing and other loans. The recovery of economic activity after the initial period would favour workers by protecting employment and gradually leading to higher wages. Government policy would also favour the redistribution of income and improve the situation of the poorest. The reactivation of the domestic market would benefit small and medium enterprises.

The losers would be the banks and big business interests that have run the country for decades — and ruined it — and European creditors including the ECB, which on Emergency Liquidity Assistance alone is exposed to Greece for more than €90bn.

Greece is at a historic crossroads: its economy is crippled, its society deeply wounded, its institutions rickety and its geopolitical position weaker than it has been in several decades. Among the countries of Europe, Greece is unique in the complete failure of its ruling class. The social forces that could potentially lead it forward, while shaking society out of its current torpor, are low in the social pyramid. They support Syriza, and it is therefore vital that Syriza should seize this opportunity.

Joining the EMU has proved to be a serious mistake for Greece. But it still has the option of taking a different path. In doing so it could also help Europe rid itself of a toxic monetary system that survives only because it is backed by powerful economic and political interests. Europe is being slowly throttled and needs a jolt to bring it to its senses. Throughout history, Greece has often played a role disproportionate to its size. This may be another such occasion.

- Costas Lapavitsas is co-author, with Heiner Flassbeck, of Against the Troika: Crisis and Austerity in the Eurozone, a strategic left-wing plan for how peripheral countries could exit the euro.