Christine Delphy, who was described by Simone de Beauvoir as "France's most exciting feminist writer", has been one of the few constant voices since the '70s to speak against the reactionary liberal feminism that has come to dominate the mainstream. Sylvie Tissot, author of Good Neighbours, reflects on the influence of Delphy's materialist, anti-racist analysis. 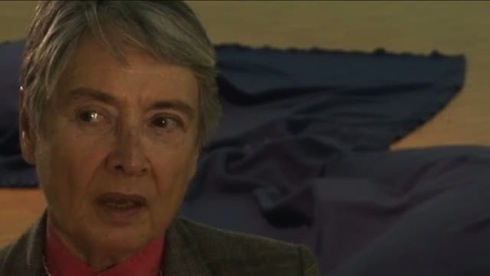 By Sylvie Tissot, January 2015. From the booklet accompanying the two films "Je ne suis pas féministe, mais... [I'm not a feminist, but...]" and “L’Abécédaire de Christine Delphy [The ABC of Christine Delphy]". Translated by David Broder.

I met Christine Delphy in 2003. Curiously, back then her name was not very familiar to me. Curiously – or maybe not. After all, though I was already a feminist and a sociologist, in my studies I had never heard any discussion of gender (except in the United States). My feminist sensibilities were fed by a strong feeling of injustice, but like any French woman who grew up during the backlash of the 1980s, I was long reticent to the idea that there is a structural sexism, something more than a question of men and women’s individual good will.

The late 1990s and 2000s were formative years, and reading Christine’s texts played a decisively important role in this. I could say that this meeting was, for me, part of that mass of little miracles that make engagement possible, desirable, and even necessary; and most importantly, joyous rather than sad. One among the many motivations at the origin of this film is the hope of remaking this miracle of political emancipation for other people, when everything, a priori, incites us to inaction.

Among Christine’s writings, I would firstly cite her ‘Our friends and ourselves’, which appeared in her book The Main Enemy. After a number of years hanging around the far Left [gauche de la gauche] and then being active in a mixed feminist group, this text was a long breath of fresh air, an ointment for the open wounds that had been inflicted by other activists’ unyielding sexism and the – slightly more euphemised – sexism of the intellectual world. Reading and rereading this text, I no longer had to deal with these little humiliations alone. I could talk about them in the non-mixed feminist groups that I now came to be active in, and together with these women friends mock the virilism of the activists determined to change the world with their testosterone.

Christine Delphy taught me to be a feminist with laughter. Her humour does not only consist of bon mots. It has privileged targets: the ‘masculine grotesque’ that Simone de Beauvoir talked about (‘this way of taking oneself seriously, this vanity, considering oneself important’) but also naïve and gauchely optimistic postures. Delphy’s humour is devastating, in all senses of the word, and at the same time restorative: through its sometimes sharp derision and its feminist commitment, it almost neutralises the depressing character of women’s oppression.

Her materialist analysis of the inequalities between men and women provided another weapon. In 2003, given feminist studies’ lack of visibility, I was led to read Pierre Bourdieu’s Masculine Domination well before Delphy’s The Main Enemy (but after The Second Sex), and I did not immediately perceive the limits of Bourdieu’s text. I had been trained in critical sociology and the interrogation of categories, which I had conducted with regard to the question of ‘sensitive neighbourhoods’. With her famous ‘gender precedes sex’, I discovered the stunning effect that constructivism could produce in turning gender analysis upside-down. Indeed, in ‘Penser le genre’, Christine Delphy explains that the categorisations ‘men’ and ‘women’ – and not only the inequalities between the two groups – are a social construct.

In my eyes this radical constructivism gives hope, even as it ceaselessly brings our attention back to the implacable, almost immobile, machine of women’s oppression. Indeed, it is extremely difficult for women to call themselves feminists and to recognise the structural dimension of sexism. Being socialised as a girl leaves lasting traces on our affects and desires. And nothing is more unpleasant than seeing that you are conditioned to carry out particular roles, which, even if you experience them as free choices, surreptitiously construct a less enviable future for you: listening rather than acting, devotion rather than creativity, bringing up children rather than a career, etc.

Nonetheless, it is one thing to feel less gifted, less strong, less able in these valorised fields like action, speech and intellect, and quite another to understand that this is because from a young age we have learnt to be so, and to be persuaded of our own inferiority. And if this is a social learning process, then this can be undone, or redone, at least in part.

However, as Christine Delphy’s own path shows, however joyous and collective political radicalism may be, it comes at a price. It has a professional cost because university careers do not easily make a home together with activism, and still less with feminism. But Christine Delphy did not only want to write feminist studies, an activist science. She has also dealt with the new stakes facing feminism, which, as she says, ‘never has its path laid out in advance’. Her activist engagement in opposition to the war in Afghanistan, and then standing side-by-side with scarf-wearing Muslim women from 2003 onward, provoked fresh ruptures, which added to a great number of others that have existed since the beginning of the feminist movement. When friendships are unimaginable without common convictions, and when they are as strong as these convictions, they do not survive such splits.

Christine’s radicalism has lasted over time thanks to her anger and her tenacity. We see her obstinacy in her categorical refusal of essentialist approaches as well as of queer theories, accused of masking the structural character of women’s oppression. We also see it in her annoyance at the important place that men occupy even in feminist studies, and her cutting tone when she denounces it.

In the activist world as in the academic world Christine has paid a heavy price for her anti-racist commitment. At the same time, it provided the opportunity to build new friendships with younger and less white activists. As we all remember, her 2003 arrival in the Collectif École Pour Tous et Pour Toutes brought an immense contribution for all concerned. For a movement that had to confront the official ‘feminism’ of Nicolas Sarkozy and of Ni Putes Ni Soumises, this offered legitimation from a feminist who was among the founders of the women’s liberation movement. Even more valuable was her refutation of the opposition between the anti-racist and the anti-sexist struggles. Without elaborating further on the asymmetry in our positions and hers, through her presence and her unfailing support she contributed to what was a difficult struggle – but one that also consisted of laughter, parties and shared plates of fries. We remember the rare emotion that spread across the hall with the thunderous applause greeting her intervention at the Trianon Meeting, a few days after the 15 March 2004 vote on the bill excluding girls who wear the Islamic scarf from state schools.

Finally, Christine Delphy’s thought exists in a very particular style, which is also at the origin of this film project, born of discussions with Pierre Tevanian. Christine’s writing is accessible, powerful and funny. But at least as much as her writing, the long interviews that make up L’Abécédaire de Christine Delphy allow the deployment of a thought that is always in movement. Feeding on the past and the present, she deepens her reflection with frequent short turns or detours, all of a sudden breaking into anecdote or an unexpected comparison, or the metaphor she so loves, but without ever losing sight of the thrust of her exposition.

In return, the biographical narrative always provides a space for analysis. The mix of seriousness and humour, of anger and lightheartedness that we see in L’Abécédaire de Christine Delphy is a rare practice indeed in academia. Her disciplinary position is also a singular one, oscillating between a philosophical taste for concepts and their deconstruction and an unfailing sociological insistence on social relations.

The feminist struggle has no need for heroic figures. Certainly, meeting a personality like Christine, we do feel admiration. But this project is also based on friendship, which implies equality and cannot exclude disagreements, such as the ones that we have with regard to prostitution or the trans question. These two films are nonetheless an homage to an intellectual figure who is simultaneously both very well-known and not well-known enough, and who, in her own rare manner, combines engagement with intellect. Indeed, Christine does not content herself with putting her knowledge and her credibility at the service of controversial causes; she is also an engaged intellectual in the less common sense – less practiced because it is the most arduous – namely the task of elaborating your reflection on the basis of struggles. As against those who content themselves with thinking about emancipation and prophesying insurrection from afar and from on high.

So D is now D for Delphy – as much as for Deleuze (or Foucault, Bourdieu and the others). Women are always being saddled with their first names only, but Delphy is a surname that, taking its proper place, disrupts the list of great men who have too long taken all the glory for intellectual reflection and political radicalism.

- Christine Delphy is author of Separate and Dominate: Feminism and Racism after the War on Terror.