The latest on Greece: Towards the political constitution of the front of the "No"

Early this morning, the Greek parliament voted to approve the latest agreement with its creditors. But the deal was also met with the strongest resistance yet from within Syriza, which according to Stathis Kouvelakis is "disintegrating at record speed". The following statements shed light on the most recent moves by those organising to give voice to the "Oxi" vote. 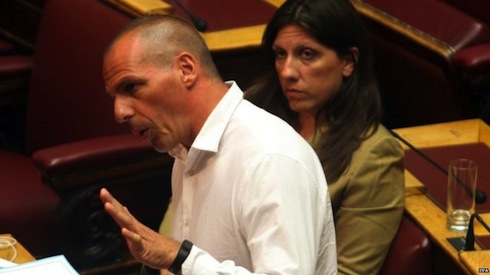 Towards the political constitution of the front of the "No"

The developments in Athens are dramatic and their pace is accelerating. In the next few hours the Greek parliament will vote on the new, third, Memorandum agreed between the Syriza government and the Europeans following the now standard express procedure of a single-day (and night…) “debate”. The MPs of Syriza’s Left Platform have already announced that they will vote “no” and the number of other Syriza MPs who will do the same is still unknown. Among them there will certainly be Zoe Kostantopoulou, the president of the Greek parliament who is currently waging a desperate fight for the ultra-minimal procedures of parliamentary debate to be respected. Her attitude has triggered a tremendous media attack, which is now openly backed by members of the government and pro-government Syriza MPs.

Another major development was the call issued today for a popular mobilisation and for the constitution of committees against the Memorandum across the country by the leaders of Syriza’s Left Platform (Panagiotis Lafazanis of the Left Current, and Antonis Davanelos of DEA/Red Network) and leading figures of twelve other organisations of the Greek radical Left. Among them two (ARAN and ARAS) are founding components of Antarsya. This is widely considered to be the first public step towards the constitution of a new political front that will regroup a large range of forces of the radical Left opposing the new Memorandum and the neoliberal U-turn of the Syriza government.

The Memorandum will certainly be voted for by a broad majority in Parliament, thanks to the support of the centre-right and rightwing parties. However, it is highly likely that the government will lose support among its own parliamentary group and will call for snap elections in a month’s time. The main rationale for this unprecedented move is to prevent the emerging leftwing opposition from organising itself and also to be able to hold elections before the concrete impact of the new austerity measures starts biting. In any case, these elections will be the first test for the new anti-austerity front that is crystallising around the Left Platform. The next few days will be crucial.

Below is the full text of the call signed by the leading figures of the 14 organizations of the Greek radical Left:

No to the Memorandum: Call for struggle and mobilisation across the country

The undersigned, representing a wide range of forces and organizations of the Left, reject the new third memorandum submitted today to the Parliament and call for large unitary struggles to overturn all memoranda and impose a new progressive orientation for the country.

The signing of a new Memorandum by a government that was elected to abolish the previous two, amounts to a major disaster for the Greek people and democracy. The new Memorandum means even more austerity, further restriction of the rights of the citizenry and the perpetuation of the country's regime of tutelage. The new Memorandum is a complete reversal of the mandate of the Greek people who rejected in the referendum of 5 July in their entirety the neoliberal policies of austerity and of neocolonial dependency.

Throughout the last five years the people opposed in every possible way the fear and blackmailing and struggled for an independent, just, reconstructed, democratic and sovereign Greece. As was the case for the previous ones, this Memorandum needs to be met with the wider militant resistance of a cohesive and determined society. We will continue down the path of July 5 until the end, until the overthrow of the policies of the Memoranda, with an alternative plan for the next day, for democracy and social justice in Greece.

The fight against the new Memorandum begins now, with the mobilization of the people in every corner of the country. For this fight to develop and win, it is necessary to build up popular organization at all levels and in all social areas.

We call for the constitution of a broad political and social nationwide movement and for the creation of committees of struggle against the new memorandum, against austerity and against the tutelage of the country. This will be a unitary movement that will justify the aspirations of the people for democracy and social justice.

The fight that led to the triumph of "No" of July 5 continues and will win!

The vote in Parliament on the Memorandum: 43 Syriza MP's vote "no" or "present"

The result of the early morning vote on the Memorandum was a slap in the face of Alexis Tsipras and his government. Of course, the Memorandum was approved, thanks to the support of New Democracy, Pasok and Potami, with 222 votes out of 300. But 43 Syriza MPs refused to support the government (32 "no" and 11 "present"), a figure higher than in any other previous vote. The "no" vote regrouped the MPs of the Left Platform, the four MPs of KOE, Zoe Kostantopoulou and her close collaborator Rachel Makri, former finance vice-minister Nadia Valavani, Vangelis Diamatopoulos (an MP close to the "anti-authoritarian" milieu) and Yanis Varoufakis. The "present" vote came essentially from MPs of the 53+ tendency, the left wing of the "majority" bloc. Alexis Tsipras’s speech was particularly defeatist and incoherent. The result of the vote forced him to postpone the decision to call for snap elections. The newly invented manoeuvre will be to ask for a vote of confidence in Parliament, after August 20, to put the No camp within Syriza in a difficult position.

The widely shared impression is that Syriza is purely and simply disintegrating at record speed as a party. The Moloch of the Memoranda is devouring a new victim.