Óscar Martínez, author of The Beast, has been receiving death threats. He spoke to Daniel Alarcón of The New Yorker about why he was preparing to flee his country, El Salvador. 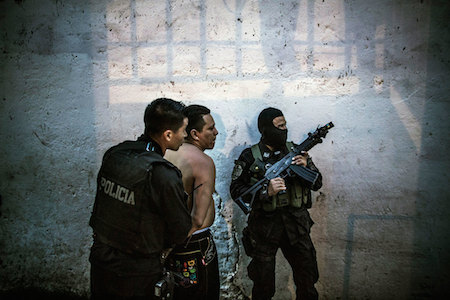 Martínez, along with two other journalists Roberto Valencia and Daniel Valencia Caravantes, had exposed an extrajudicial police killing in a recently published article in El Faro, a local online news medium.

Thus far, President Salvador Sánchez Cerén’s populist response has been to disown the truce that held for the better part of two years, and instead confront the gangs directly. No politician wants to be seen as soft on the gangs, which are rightly seen as a scourge. The public, for the most part, supports this strategy. For El Faro to criticize the police is to risk being seen as defenders of the gangs that everyone despises. Óscar had already received death threats for an earlier story about police misconduct.

Óscar, who is thirty-two, sees things differently. “We’re a society that knows nothing about peace,” he told me. “I’ve never lived it.” These days, El Salvador, he argued, is in the grip of something terrible, something frightening and lawless, and it’s natural for people to be outraged. But allowing police to kill with impunity is far too dangerous a proposition in a country with El Salvador’s history of state violence.

The murder rate in the country has increased by 52 percent in a year, since the truce between the government and the local gangs broke up. Alarcón draws from Martínez’s experience to understand the people’s current rage against the local gangs and the government policies that take advantage of this rage to frame sketchy policies.