A historical narrative about a highly topical subject, pegged to a punchy, counterintuitive thesis that flatters the wisdom of powerful people and institutions, Michael Javen Fortner's Black Silent Majority: The Rockefeller Drug Laws and the Politics of Punishment is one of the year's more likely academic publishing success stories. 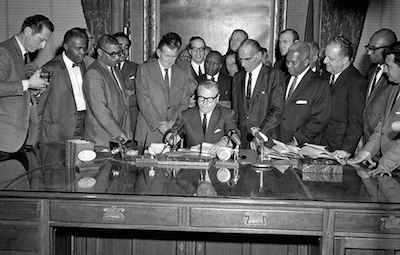 Under a title borrowed from a phrase coined by Daniel Patrick Moynihan, Black Silent Majority argues that New York's 1973 Rockefeller Drug Laws—and, by extension, the whole gamut of law-and-order policies that ushered in the era of mass incarceration in America—primarily reflected the concerns of an organically conservative Black middle class, rather than White reaction to Civil Rights Movement successes or the conjunctural interests of capital.

In this month's Boston Review, historian Donna Murch (author of Living for the City: Migration, Education, and the Rise of the Black Panther Party in Oakland, California and contributor to Verso's forthcoming False Choices: The Faux Feminism of Hilary Rodham Clinton) takes a closer look at this "ambitious and provocative book by a young African American political scientist":

While Black Silent Majority’s liberties with the historical record are disconcerting, at a more philosophical level its insistence on interpreting trauma and responses to social crisis simply as resolute calls for punishment may be even more troubling. Though Fortner seeks to resurrect the lived experience of black people, he is deaf to Harlem residents’ demands for more social welfare and state redistribution to alleviate poverty, the primary cause of crime itself. Strikingly, he dismisses as unrepresentative Kenneth Clark, A. Philip Randolph, and black elected leaders who sought social democratic solutions to the problems of urban divestment, redlining, and institutionalized racism.

Absent from Black Silent Majority is an examination of what happens when a marginalized community facing mass capital abandonment, job loss, and an urgent public health crisis is presented only one policy option: more policing and punishment. The book offers no discussion of the Nixon administration’s 1971 declaration of a war on drugs and its establishment three years earlier of the federal Law Enforcement Assistance Administration, which, through funding tough-on-crime measures, provided strong incentives for the punitive turn across the United States. This omission is not accidental. After all, Fortner’s thesis hinges on the idea that the vengeful campaign that culminated in the Rockefeller drug laws emerged from “indigenous construction” of an autarchic “black ghetto” riddled by class conflict and violence.

While Fortner declares his concern for black crime victims, his book exhibits a distinct lack of empathy not only for drug users but also for the ordinary Harlemites he ostensibly champions. He writes that Harlem “needed urban renewal as much as a cultural renaissance,” referring to the sorts of city building projects that tended to demolish poor and minority neighborhoods to make room for new development, highways, and other public works. He speaks of the black silent majority itself in somewhat contemptuous terms, explaining, for example, how “drug addicts . . . pilfered the symbols of their thin yet meaningful success: television sets, fur coats, and the hubcaps on their Cadillacs.” Ultimately, Fortner appears less interested in telling the stories of victimized people than in mobilizing their very existence to justify his claims that African Americans themselves were a driving force behind the drug war and mass incarceration and that an overwhelmingly reactionary black working- and middle-class repudiated black militancy and racial liberalism in favor of law and order.