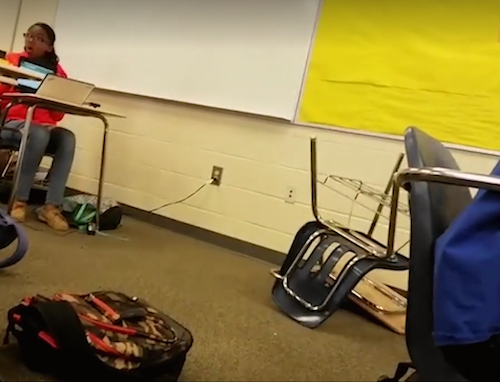 In South Carolina a few days ago, Ben Fields—a white sherriff's deputy—slammed an 16-year-old African-American student to the classroom floor, then dragged her across the room. Like so many incidents recently, Fields' violent act points to the increasing criminalization of America's students—and that criminalization's distinctly racial bias.

But what happens to students who are slammed, dragged, and handcuffed? These incidents are not isolated moments—they are entry points into the now longstanding school-to-prison pipeline.

Annette Fuentes' investigation of the penetration of prison culture into the schoolhouse, Lockdown High, reveals the long-term effects of zero tolerance policies in the classroom:

For longer than a decade now, education and youth advocates have been sounding the alarm about zero tolerance and its toll on students, especially those struggling to achieve. Excluding kids from school for two days or two months increases the odds of academic failure and dropping out. What’s more, suspensions and academic failure are strong predictors of entry into the criminal justice system, especially for African-American males. It’s a phenomenon that legal and education experts have dubbed the “school-to-prison pipeline.” If yesteryear’s prank got a slap on the wrist, today those wrists could be slapped with handcuffs. Russ Skiba, educational psychologist and a leading authority on race and disciplinary policies, says “hype” over school violence has encouraged the use of zero tolerance and school exclusions even though there is no evidence that they work. “There is a belief that zero tolerance is a critical and important measure for preserving safe learning climates and that we have to remove a certain proportion of students to do so,” says Skiba, director of the Equity Project at Indiana University’s Safe and Responsive Schools center. “But even if we say these are bad kids, the data we’re talking about says zero tolerance doesn’t make a difference. It is not teaching kids what they need to succeed and is putting them in jeopardy. What if we are creating the conditions for placing higher proportions of students at risk for jail?”

In 2000, the Advancement Project, a civil rights organization in Washington, D.C., and the Civil Rights Project, then based at Harvard, published a seminal assessment of the impact of zero tolerance in schools, and its conclusions were devastating: “Zero Tolerance has become a philosophy that has permeated our schools; it employs a brutally strict disciplinary model that embraces harsh punishment over education . . . children are not only being treated like criminals in school, but many are being shunted into the criminal justice system as schools have begun to rely heavily upon law enforcement officials to punish students.” “We are breeding a generation of children who think they are criminals for the way they are being treated in school,” said Judith Browne-Dianis, co-director of the Advancement Project. “School used to be a refuge. Now it’s a lockdown environment. We are bringing the practices of criminal justice into the schools.”

In the South Carolina incedent, the injured student, who is in foster care after the death of her mother, is facing charges of disturbing the peace.