'The offensive against Belleville' by Eric Hazan

Today we mark the release of Eric Hazan's A History of the Barricade by publishing his analysis of proposed selling off of 48 Rue Ramponeau, a street in the 20th arrondissement in the Belleville district of Paris. In his cultural history of the barricade, Hazan traces the barricade's use in the days of the Paris Commune: Rue Ramponeau is one of the streets of Paris that

compete for the honour of having hosted the final barricade of the Commune. For Lissagaray, ‘the last barricade of the May days was in the rue Ramponeau. For a quarter of an hour a single Federal defended it. Thrice he broke the staff of the Versaillese flag hoisted on the barricade of the rue de Paris [now de Belleville]. As a reward for his courage, this last soldier of the Commune succeeded in escaping.’ Legend has it that this soldier was Lissagaray himself.

Hazan explores the effects of embourgeoisement to the people of Belleville—this is not the first time officials have tried to sell off parts of the neighbourhood—and reflects on the history of protest up to the successful local resistance of the 1990s. 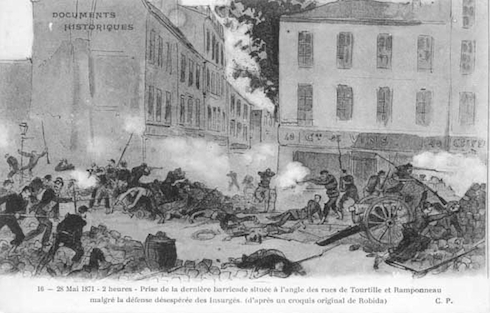 The Semaest (a semi-public company attached to the City of Paris) is about to sell off 48 Rue Ramponneau, in the twentieth arrondissement. The future owner is planning on demolishing the building (home to the district’s last metal workshop) in order to build a 200-bed youth hostel. The Paris Council is examining a bid to save the workshop. Éric Hazan looks at the current state of the ‘destruction of Belleville’.

More than twenty years ago the inhabitants of lower Belleville struck a blow to stop the destruction of their neighbourhood. Faced with the resistance organised by the Bellevilleuse – the association of locals in rebellion against the plans – Didier Bariani, the UDF (centre right) mayor of the twentieth arrondissement, and Jean Tibéri, mayor of Paris, had to abandon their massacre. From then onward, the rectangle marked out by the Rue des Couronnes, the Rue de Belleville, the Rue des Pyrénées and the boulevard has not suffered any further damage; apart, that is, from the rampant progress of the neighbourhood’s embourgeoisement (and I say embourgeoisement and not ‘gentrification’, which is a pitiful euphemism designed to exclude those of us who live in this corner of the world and ones of the same kind: we are bourgeois, understood, but not gentry, all the same).

But recently, the offensive has resumed. La Forge, a set of artists’ workshops, was built at the beginning of the 1990s on an industrial brownfield site. The building, set back from the Rue Ramponeau, left a vast empty space in front of it. This could have been a shared garden, or better a space in which nature could have shown all the inventions that it is capable of when we allow it to. But the Paris mayor’s office – of whatever political stripe – cannot stand empty spaces. This site was thus handed over to Mr. Bouygues’s construction activities. The block, adjoining the one where I myself live, is not badly designed, but it confines the tenants of La Forge into a long corridor of brick and concrete, while also erasing one of the last empty spaces in what is already a more than sufficiently built-up neighbourhood. To complete the recuperation effort, the mayor’s office has handed over La Forge itself to a private art market agent.

The part of the Rue Desnoyers near the Rue de Belleville was (and, for the moment, still is) a site where young graffiti artists express themselves all day long. Whatever you think of their street art, they bring life and joy to the area. On the corner of the Rue de Belleville, the Vieux Saumur was a truly popular café, frequented by old Algerian workers as well as our very own drunks and young people from the neighbourhood. The Kabyle owner welcomed everyone. The mayor’s office has bought up or taken over this whole corner, walling up the houses and closing the café. The plan is to demolish this section of the street (except the café, which is a listed building and will be taken over in future – but by who?) and construct a block including a crèche and accommodation for ‘isolated women’. This is a commendable goal, but the choice of this precise location, among so many other possible ones, clearly shows the city authorities’ will to clear out a corner where young people can freely express themselves.

Recently this offensive has spread to 48 Rue Ramponeau, where two plaques remember the memory of Albert and Raphaëlle Chelblun, executed by the Nazis. At the bottom of the building’s charming courtyard, is one of the last little factories in a neighbourhood that used to have so many, one that is still operating today: Grésillon, a metal workshop founded in 1947 and which employs eight people full time.

The site’s owner, Semaest, a semi-public company closely linked to the mayor’s office, has signed a promise of sale agreement with a developer, whose intention is to demolish this whole parcel of land and build a hostel for tourists. In opposition to this fresh planning assault, Rue Ramponeau and its surrounding area have mobilised, and at an arrondissement council meeting held on 18 June there was a majority to reject the demolition. This despite the council session itself being a caricature, with the public (who had come in large numbers to support Grésillon) parked at the back of the hall, with the sound system making the interventions inaudible and the debates being led by the mayor like a private school governess might have done fifty years ago.

This offensive is not the result of an organised plot but a convergence of interests. On the one hand, the interests of property developers who want to change lower Belleville: the neighbourhood of old Tunisian Jews, of Arabs, of Blacks, of Chinese, slowly being colonised by an ‘intellectual and artistic’ petty bourgeoisie pushing up property prices and swelling the developers’ greed. On the other hand, the mayor’s office is trying to get rid of a difficult-to-control population, capable of unpredictable upheavals and which, moreover, doesn’t vote – particularly not for the town hall.

Like in Barbès, the Goutte-d’Or, Clignancourt and La Chapelle, lower Belleville is being cleared out. But here there is a vivid memory of the victorious resistance of the 1990s. And it’s not already written in advance that the developers will have the last word.

The article was originally published here.

Listen to Hazan speak on The World Tonight below: