Learning to Read: A queer history of New York streets

The next installment of the anti-walking tour of New York takes us through the pre-Grindr boulevards of urban queer life. 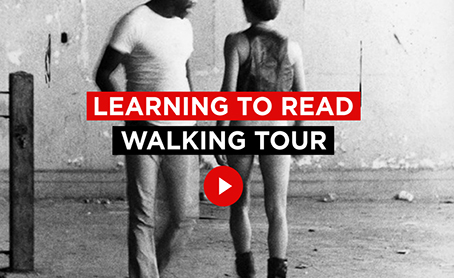 "Learning to Read" is the second installment of the Gothamits's multi-part interactive walking tour series based on the text of Capital: New York Capital of the 20th Century, 50%-off this week!

You might begin with the anxieties of cruising on 57th St & Park Ave:

Let’s suppose you are in a real city and you are a man and you are walking down the street, in the thick of the crowd. Glancing up from the pavement, for just a moment, you notice a man walking in your direction and he’s staring straight at you. Not every man fixes his stare before his feet at this violet hour, it seems. You don’t. His stare hits you right between your eyes. And not for the first time. You recognize him. He has looked at you in this way before—and he has seen you see him do this before. Let’s say he is about your age (whatever age that is) and he is wearing a suit, like you. You two could be twins, in the dark.

You don’t know why, or rather, you don’t at this particular moment ask yourself why, but you hold the gaze of this man who is now walking closer to you and who refuses not to look. Seconds pass, perhaps as many as five or six, but it seems like longer. Time slows down for you, as it always does in situations like these. In an instant, the gaze between you two is broken—you look down, or perhaps he looks away. Maybe someone passes between you, or something else diverts your attention. It’s noisy, with the sound of horns and motors, but it could be anything. As quickly as the moment came upon you, it is lost. Almost. You look back, behind you, and see that he, too, is looking back behind him.

You are hurrying ... in order to catch a train because you have a family to go home to, a ready-made microwave meal awaits, probably kids, the lot. You don’t want to be late, not again, not again this week anyway. You look forward to your train journey, because this is your time, your very own time, the time between two lives, someone might say.

On the train home, settled into your seat, and for reasons you cannot explain to yourself or for reasons you really don’t understand, the man on the street—your man on the street, handsome with a nice suit—comes back into your mind. He was never very far out of your mind, if truth be told. You are going a little red in the cheeks at the thought of it, even now. Did you go red in the cheeks when he was looking at you? Was it the blush of shame or the blush of desire? Do you know the difference between shame and desire? These are questions you could ask yourself, but don’t.

Instead, you wonder if one day this man will speak to you. Speak to me, you think. Why do you never speak? What are you thinking? I never know what you are thinking.

Can we talk about a network of cruisers rather than occasional and seemingly isolated, if not accidental, encounters?

While walking the street, my gaze would be riveted on stalwart adolescents, and I would have to look back at the handsomest that passed. If a street- car conductor happened to be youthful and good-looking, I became almost irrational. With a look of despair I would gaze insolently and imploringly into the face of the blue-clad youth as if I would compel him to read my thoughts, since I did not dare give them expression. When in a crowded car he brushed against me in passing, a tremor would pass over my body. Youthful policemen also at this time particularly fascinated me. Blue clothing and brass buttons have always made a young man appear to me as at his best.

“So we are taking off our masks, are we, and keeping / our mouths shut? As if we’d been pierced by a glance”—that later leads us to “the merits of each / of the latrines. 14th Street is drunken and credulous, / 53rd tries to tremble but is too at rest.”

What does it mean when two men look at each other in the streets of the modern city?

This chance encounter—“the magnetism of our meeting.” The cruiser queers the flâneur.

Cruising is a practice that exploits the ambivalence of the modern city, and in so doing, “queers” the totalizing narratives of modernity, in particular, flânerie.

There’s an art to cruising and it has a lot to do with timing and with the eyes. Take eyes first. You’re walking down the street and you pass a man going in the opposite direction. Your eyes lock but you both keep on moving. After a few paces you glance back and see that the man has stopped and is facing a store window but looking in your direction. If he’s not exactly the partner you’re searching for you’ll probably register the compliment his stare is paying you but leave it at that.

But if he does catch your fancy you may go through the little charade of examining the shop window nearest you. After a bit, the frequency and intensity of exchanged glances will increase and one of you will stroll over to the other. There are a few safe and stock opening lines banal to the point of absurdity ... After these preliminaries you may extend your hand, introduce yourself, ask him his name and suggest you have a drink together.