The French disaster: Stathis Kouvelakis on the Front National and disintegration of the Left

The recent gains of the Front National in France's regional elections may not represent 'fascism' in its classic form, but is a catastrophe none-the-less. Stathis Kouvelakis argues that such revivals of reactionary populism and the accompanying hardening authoritarianism of 'liberal democracies' shines a daming light on a 'radical Left' that is fragmented, weak, and bereft of any true counter-hegemonic project. Translated from the French by David Broder. 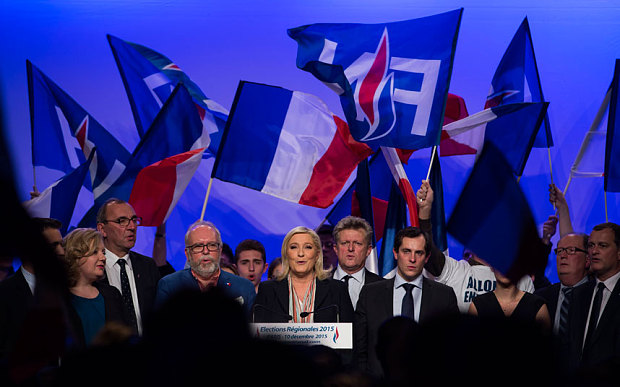 Inevitably, the image of the map of France ‘blackening’ with the advance of the Front National’s vote brings up the question of whether the country is about to tumble into a kind of ‘state of exception’ on the model of interwar Italy and Germany: in other words, fascism. All the more so when we consider that such a situation first came about in those countries through power being captured by electoral means; and that with the introduction of the ‘state of emergency’ after the 13 November attacks, we seem already to be on the path of the ‘state of exception’.

Fascism as a perverted revolt

Yet the comparison is misleading. France in 2015 is not the Italy of 1920 or Weimar Germany: world war is not on the horizon, the parliamentary system is not on the brink of collapse, the far Right is essentially an electoral machine and not an armed militia, and workers’ organisations are so weak that the survival of bourgeois domination is not at all conditional on their destruction. Here, we do not have the general crisis of the state or the inter-imperialist military competition that constituted the basic conditions of the ‘process of fascistization’ analysed by Nicos Poulantzas in his classic 1970 work Fascism and Dictatorship. Even if the FN were to come to power by the ‘electoral road’, what would follow would not be a ‘fascist dictatorship’, but a a qualitative leap in the process that is already underway – the hardening of the authoritarian state and of racialising means of exclusion of fractions of the “body politic”, without this entailing a clear-cut break with the existing form of the political regime.

This would then take on a form approaching a state of apartheid, of institutionalised separation between groups that are essentially groups of nationals, totally endogenous to French society but which constitute the target of powerful discrimination mechanisms. In  other words, the FN is indeed the bearer of a coherent political project, which consists of constructing a ‘social bloc’ welded together by a racist and authoritarian “common sense” seeking to resolve social contradictions – and particularly the trajectory declassing growing sectors of French society – through the establishment of a regime of racialising segregation.

There is, however, one point on which the FN dynamic does bear comparison to the interwar fascisms, which goes beyond this party’s historical origins or any line of ideological descent from one political current to another: namely, these forces’ capacity to present themselves as ‘anti-systemic’; their capability in articulating a multiform popular anger by crystallising it against a target – the ‘enemy within’. Of course, the FN does not have the imperialist/expansionist project of the interwar fascisms; in this sense, its dynamic is a ‘defensive’ one, and it is the product of the era of globalised capitalism, not that of the imperialisms fighting to divide up the world.

Nonetheless, it is precisely this aspect of the FN – its capacity to capture and ‘hegemonise’ a form of popular revolt – that means that any ‘republican front’ strategy, whether a partial or a total one, can only feed it, legitimising its discourse of ‘us against all the rest’ and its self-proclaimed status as the only force opposing ‘the system’ – even ‘radically’ so. The current far Right draws its strength precisely from this capturing of anger and radicalism, and it is in this sense that, like any fascism, it should be seen as a “hijacking” of revolt. The other side of this process is, therefore, nothing other than the radical impotence of the so-called ‘radical’ Left: its incapacity not only to propose a counter-hegemony of the subaltern classes, but even, quite simply, to make itself recognised as the force that provides the true challenge to the existing order.

A disaster with deep roots

The extreme weakening of the ‘radical Left’, as demonstrated by its record low score in last Sunday’s ballot (around 5% of votes cast, 6.5% if we add up the vote for the far-Left Lutte ouvrière lists), can be attributed to immediate causes that are relatively easily understood. Firstly, an‘accommodating’ alliance strategy that in previous elections also included alliances between the Front de Gauche’s (FdG’s) main component – the French Communist Party (PCF) – and the Socialist Party (PS). That confused and confusing strategy tested the unity and coherence of this coalition and made its positioning incomprehensible. To that we should add the form of this coalition, organised like a cartel of different parties’ organizations, preventing any true militant activity ‘from below’ and reproducing fragmentation and forms of internal competition. That said, however serious these processes were, they were more symptoms than causes of the decline of this political current.

More fundamentally at issue is a process of disintegration of the ideological and programmatic identity of the ‘radical Left’, simultaneously both fed by and leading to its aggravated subalternity to a social democracy that has itself become a loyal manager of neoliberalism. Such a process has been punctuated by a chain of retreats, compromises and omissions both small and large. This has been illustrated, in the French case, by the rallying to the “national security” and imperialist consensus embodied in the FdG MPs’ unanimous 19 November vote in the National Assembly in favour of a three-month extension of the state of emergency, followed by the fusion of FdG and PS lists in the second round of the regional elections ‘in order to stop the FN’.

Taking the situation as a whole, we can say that the French ‘radical Left’ (and not only the French one) believed and believes that opposition to neoliberal policies, combined with support for social mobilisations targeted against such policies, would suffice as a political proposal. Scratching the surface a little, behind this belief we find another one: the idea that, given that social democracy has rallied to neoliberalism, and that the project of an anti-capitalist revolution has floundered with the collapse of the USSR, a political space has opened up for those forces who persist in defending the gains of the welfare state – the only heritage of the workers’ movement that could still be defended.

These gains might legitimately be considered of incontestable historic significance, notwithstanding the pseudo-subversive discourse denouncing the welfare state, such as is conveyed by Toni Negri and the ‘far Left’ of the neoliberal bloc. But defending such gains falls far short of constituting a political project worthy of the name; and even less a project bearing a rupture with the capitalist order. In the best of cases, here we have what Gramsci called the ‘economic-corporate’ dimension of political action – the dimension of standing up for the subaltern classes’ immediate interests, detached from any ‘hegemonic’ dimension seeking a leading role to orient the social formation in a direction antagonistic toward the dominant class bloc.

The economic and political power of capital and its condensed form in institutions (at the national and international level) nonetheless involves many other aspects, which are bound together to make up a system. To limit ourselves to the French case, we could cite (in no particular order) its imperialist interventions, from Mali and Libya to Syria; the authoritarian drift of state institutions, locked in by a presidential system that voids representative politics of any substance; the aggravated racialisation of the social groups formed by postcolonial immigration, in an attempt to fragment the popular classes; and the European Union and its institutions (including the ECB and the euro, but also the border controls system) as means of ‘safeguarding’ neoliberal policies, breaking resistance and controlling populations in a hierarchising manner.

The retreats have piled up on each of these terrains. In the retreat from opposing the racialising offensive waged under the cover of ‘laïcité’ (French state secularism) and the ‘defence of the Republic’, which became official policy under the Sarkozy presidency – the Le-Penism ‘lite’ that opened the way (a whole boulevard) to Le-Penism tout court. In the silence on the role of French imperialism, notably in its traditional African preserves and in its unleashing of its empty (and yet terribly dangerous) ventures in the Middle East. In the pious pro-Europeanism, even after the crushing of Greece. In the total lack of reflection on the dereliction of democracy and the authoritarian onslaught.

To crown this all, even the condemnation of neoliberal policies themselves has become more and more rhetorical and less and less linked to alternative proposals – and this at the very moment that the austerity steam-roller tends to give credit to the idea that all resistance is futile and any alternative impracticable. Tsipras’s capitulation, with the noisy approval of Pierre Laurent, Gregor Gysi and Pablo Iglesias (respectively leaders of the French CP, of the German Die Linke and of the Spanish Podemos), has powerfully contributed to this drastic fall in the level of expectations. It thus seems that we have reached a point where the maximum that the ‘radical Left’ can hope to achieve is to play the role of ‘correcting’ social democracy, such as the PS/Left Bloc-Portugese CP agreement in Portugal and the repositioning of Podemos in Spain indicate. Ideological and political subalternisation, and impotence when faced with the deterioration of the social and political situation, are very much the logical outcome of this process of gradual but uninterrupted disintegration.

In such a context, there is something impracticable and vain about the injunctions calling for ‘unity’. Exactly the same is true of the incantations calling for a ‘great social movement’ or a ‘new May ’68’. If we want to break out of our current impotence, we have to begin by recognising that the forms in which political recomposition has been attempted over the recent period have all failed, including the attempts to bring about viable constructions on the basis of social mobilisations (and there has been no lack of these, particularly in the period 1995–2006). The same goes for those forces who have persisted along the same path that the far Left has followed since the 1970s, whatever the merits of the positions each of them has taken subjectively speaking. Ideological and political disintegration has produced organisational fragmentation and amplified the authoritarian neoliberal offensive’s corrosive effects on the social body.

For the (weak) remaining forces considering themselves antagonistic toward capitalism – and to the extent that they conceive of themselves as such, and not as forces for ‘the refoundation of the Left’s values’ – rallying behind the most systemic forces, such as the French socialist party, in the name of ‘stopping the FN’ is purely and simply suicidal. Or rather, it marks the final, terminal phase of a process of subalternisation and digestion by a social-liberalism that has now turned into an ever more muscular, authoritarian neoliberalism.

If one hope does still remain, it has to lie in the possibility of some reaction to the disaster that is now taking shape, making a stark rupture with the soothing discourse and the deadly ‘business-as-usual’ of interminable retreat. It is ‘more’ than time for that…and that fragile possibility lies in this ‘more’. Perhaps.