The Guardian excerpted Owen Hatherley's latest book The Ministry of Nostalgia, a polemic against austerity nostalgia.

It is on posters, mugs, tea towels and in headlines. Harking back to a ‘blitz spirit’ and an age of public service, ‘Keep Calm and Carry On’ has become ubiquitous. How did a cosy, middle-class joke assume darker connotations? 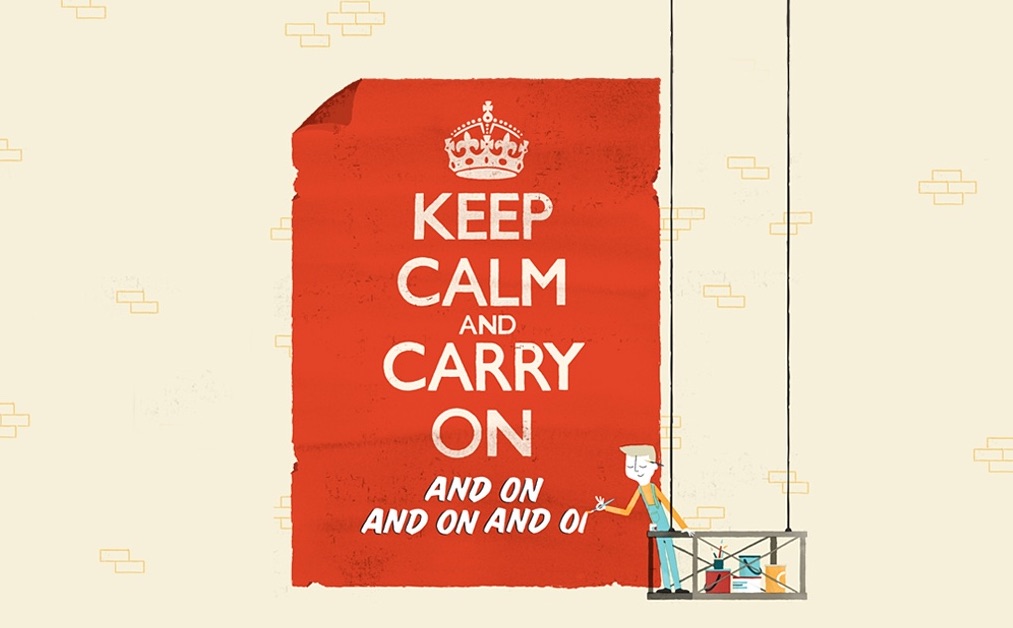 To get some sense of just what a monster it has become, try counting the number of times in a week you see some permutation of the “Keep Calm and Carry On” poster. In the last few days I’ve seen it twice as a poster advertising a pub’s New Year’s Eve party, several times in souvenir shops, in a photograph accompanying a Guardian article on the imminent doctors’ strike (“Keep Calm and Save the NHS”) and as the subject of too many internet memes to count. Some were related to the floods – a flagrantly opportunistic Liberal Democrat poster, with “Keep Calm and Survive Floods”, and the somewhat more mordant “Keep Calm and Make a Photo of Floods”. Then there were those related to Islamic State: “Keep Calm and Fight Isis” on the standard red background with the crown above; and “Keep Calm and Support Isis” on a black background, with the crown replaced by the Isis logo. Around eight years after it started to appear, it has become quite possibly the most successful meme in history. And, unlike most memes, it has been astonishingly enduring, a canvas on to which practically anything can be projected while retaining a sense of ironic reassurance. It is the ruling emblem of an era that is increasingly defined by austerity nostalgia.

I can pinpoint the precise moment at which I realised that what had seemed a typically, somewhat insufferably, English phenomenon had gone completely and inescapably global. I was going into the flagship Warsaw branch of the Polish department store Empik and there, just past the revolving doors, was a collection of notebooks, mouse pads, diaries and the like, featuring a familiar English sans serif font, white on red, topped with the crown, in English:

It felt like confirmation that the image had entered the pantheon of truly global design “icons”. As an image, it was now up there alongside Rosie the Riveter, the muscular female munitions worker in the US second world war propaganda image; as easily identifiable as the headscarved Lily Brik bellowing “BOOKS!” on Rodchenko’s famous poster. As a logo, it was nearly as recognisable as Coca-Cola or Apple. How had this happened? What was it that made the image so popular? How did it manage to grow from a minor English middle-class cult object into an international brand, and what exactly was meant by “carry on”? My assumption had been that the combination of message and design were inextricably tied up with a plethora of English obsessions, from the “blitz spirit”, through to the cults of the BBC, the NHS and the 1945 postwar consensus. Also contained in this bundle of signifiers was the enduring pretension of an extremely rich (if shoddy and dilapidated) country, the sadomasochistic Toryism imposed by the coalition government of 2010–15, and its presentation of austerity in a manner so brutal and moralistic that it almost seemed to luxuriate in its own parsimony. Some or none of these thoughts may have been in the heads of the customers at Empik buying their printed tea towels, or they may have just thought it was funny. However, few images of the last decade are quite so riddled with ideology, and few “historical” documents are quite so spectacularly false.

Visit the Guardian to read the excerpt in full.

Owen Hatherley is speaking at the London Review Bookshop on 9th February.