The Clintons’ War on Drugs: When Black Lives Didn’t Matter in The New Republic

Yesterday, the New Republic published Donna Murch's essay on the history of the Clintons' record of racialized punishment for political gain, adapted from her essay in the forthcoming False Choices: The Faux Feminism of Hillary Clinton. As we approach the 2016 election, Murch writes, "it would be good to remember the human consequences of the Clintons' 'tough on crime' stance, and how Hillary has tried to replicate this strategy of 'strength and experience' again and again." We present an extract from her piece below. 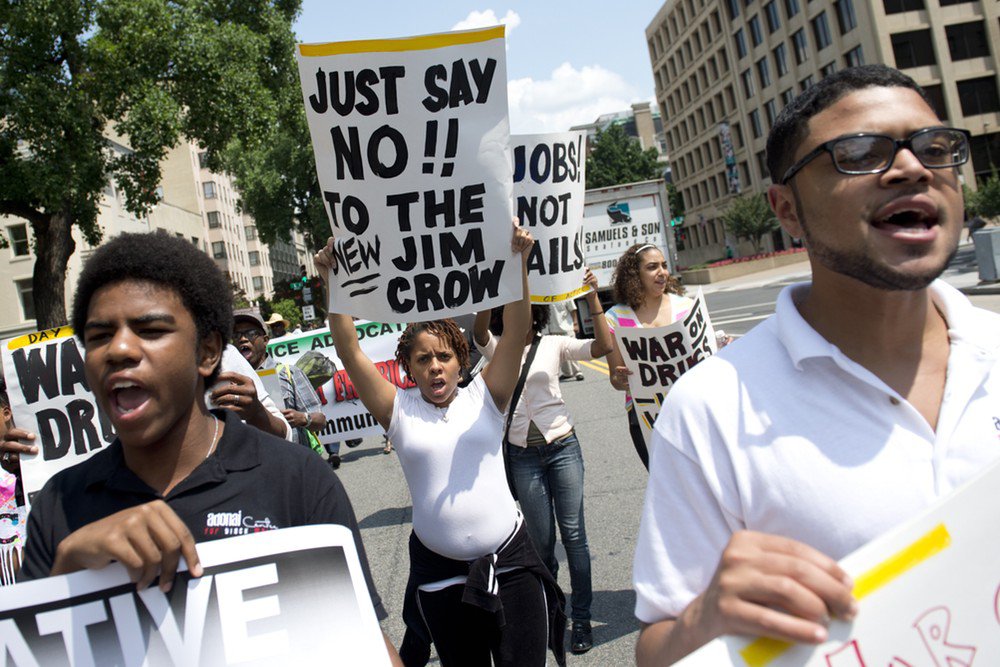 In August 2015, an uncomfortable encounter between Black Lives Matter (BLM) protestors and Hillary Clinton finally broke the silence of many mainstream press outlets on the Clintons’ shared responsibility for the disastrous policies of mass incarceration, and its catalyst, the War on Drugs. Although a number of prominent academics have written on the subject, little popular discussion of the racial impact of the Clintons’ crime and punishment policies emerged until the opening volleys of the 2016 presidential race.

A grainy cell phone video of the incident showed a handful of young BLM protestors confronting Hillary Clinton on the campaign trail in New Hampshire. After expressing her ardent feminism and pride in meeting a female presidential candidate, BLM’s Daunasia Yancey forcefully confronted Clinton about her shared culpability in America’s destructive War on Drugs: “You and your family have been personally and politically responsible for policies that have caused health and human services disasters in impoverished communities of color through the domestic and international War on Drugs that you championed as First Lady, Senator and Secretary of State.” Yancey continued, “And so I just want to know how you feel about your role in that violence, and how you plan to reverse it?”

Yancey’s question deftly turned Hillary’s use of her husband’s presidency as political qualification on its head: If her deep involvement in policy issues during her term as First Lady qualifies her for the presidency, then she could be held responsible for policies made during those years. The Clintons had used the concept of personal responsibility to shame poor blacks for their economic predicament. Indeed, Bill Clinton titled his notorious welfare to work legislation “The Personal Responsibility and Work Opportunity Reconciliation Act of 1996.” Yancey’s question forced the Democratic front-runner to accept personal responsibility for mass incarceration policies passed under Bill Clinton’s administration.

Hillary Clinton’s response to the activists was telling. She attributed the policies of mass incarceration and the War on Drugs to “the very real concerns” of communities of color and poor people, who faced a crime wave in the 1980s and 1990s. Echoing an argument that is gaining greater purchase in certain elite circles as the movement against racialized state violence and incarceration sweeps across the US, Clinton deflected the charge of anti-black animus back onto African Americans themselves. It is hard to interpret her explanation as anything more than self-serving revisionism. As I demonstrate in this essay, the rush to incarcerate was fueled by much less generous motives than the ones Clinton presents. With the Clintons at the helm of the “New Democrats,” their strident anti-crime policies, like their assault on welfare, reflected a cynical attempt to win back centrist white voters, especially those from Dixie and the South Central United States.

Read Donna Murch's essay in full at The New Republic.

We highly recommend reading all of Donna Murch's writing, especially "Ferguson's Inheritance" in Jacobin and her review of Michael Javen Fortner's Black Silent Majority: The Rockefeller Drug Laws and the Politics of Punishment in The Boston Review. She is the author of Living for the City: Migration, Education, and the Rise of the Black Panther Party, published by University of North Carolina Press in 2010. You can follow her on twitter at @murchnik.
Tagged
2016USElection