Since David Cameron announced a referendum on whether Britain stays in the European Union, the debate surrounding Britain's role in Europe has triggered a flurry of conjecture regarding the likely outcome of the referendum and the consequences of a vote to leave the EU.

Gordon Brown is the latest to come out in support of the campaign to stay in the EU, claiming it is "not British to retreat to Europe's sidelines" and arguing that Britain needed to be in the EU to shape the continent's responses to terrorism, immigration and climate change. The Economist published a story this week outlining security concerns and questioning whether Britain is safer in the European Union, or outside of it.

Whilst the narrative of opposition to the EU is largely dominated by the right, we've put together an essential reading list of books that critically engage with the debate from a perspective of internationalism rather than the xenophobia that is so common amongst EU critics. Additional books on the list analyse the refugee crisis, the Syrian civil war, the Greek debt crisis, and the nature of the contemporary British far right.

Also new on the Verso blog is an exclusive extract from John Gillingham's The EU: An Obituary, in which he comments on Brexit, the EU’s democratic failures and offers cogent predictions of the European Union’s decline. 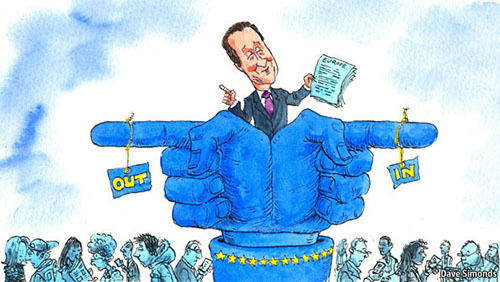 (image from The Economist)

The EU: An Obituary — John Gillingham
In this pithy, rigorously argued book, leading historian John Gillingham examines a once great notion that soured long ago. From its postwar origins through the Single Market  and to the troubles of the present, Gillingham explains how Europe’s would-be government became a force for anti-democratic centralization and inept policy-making. The EU: An Obituary is an urgent call to the political Left, Right, and Center to set things right before it is too late.

‘The European idea has turned rancid’ — read an exclusive extract from The EU: An Obituary here.

Against the Troika: Crisis and Austerity in the Eurozone — Heiner Flassbeck and Costas Lapavitsas
Against the Troika is the first book to propose a strategic left-wing plan for how countries of the European periphery might exit the euro. This major intervention lays out a detailed postmortem of the Greek catastrophe, explains what can be learned from it—and outlines a possible alternative. Against the Troika is a practical blueprint for real change in a continent wracked by crisis and austerity.

Buying Time: The Delayed Crisis of Democratic Capitalism — Wolfgang Streeck
In this book, based on his 2012 Adorno Lectures given in Frankfurt, Wolfgang Streeck places the financial crisis in the context of the long neoliberal transformation of postwar capitalism that began in the 1970s. He analyses the subsequent tensions and conflicts involving states, governments, voters and capitalist interests, as expressed in inflation, public debt, and rising private indebtedness. Streeck traces the transformation of the tax state into a debt state, and from there into the consolidation state of today. At the centre of the analysis is the changing relationship between capitalism and democracy, in Europe and elsewhere, and the advancing immunization of the former against the latter.

Crisis in the Eurozone — Costas Lapavitsas
Turning attention to the current economic situation in the Eurozone, where the banks and top financial establishments are largely unobstructed, Lapavitsas explains what can now be called “the crisis in the Eurozone” by charting a cautious path between political economy and radical economics to envisage a restructuring reliant on the forces of organized labour and civil society.

Ruling the Void: The Hollowing of Western Democracy — Peter Mair
Peter Mair has inspired many to reconsider the political environment by walking the line between political science and activism. In Ruling the Void, Mair continues his reputation by turning his attention to party democracy and its confrontation with non-democratic forces that contradict and destroy the voice of the demos or “the people”.

Buying Time: The Delayed Crisis of Democratic Capitalism — Wolfgang Streeck
Analyzing the current economic crisis which became most apparent with the 2008 crash, Streeck’s text, based on his 2012 Adorno Lectures given in Frankfurt, places the crisis in the context of the long neoliberal transformation of postwar capitalism that began in the 1970s.

Politics in a Time of Crisis: Podemos and the Future of Democracy in Europe — Pablo Iglesias
Since 2011, Pablo Iglesias has led Podemos, a new radical left party in Spain that is reframing the nature of modern politics. Under his guidance, the party has unmasked the ideological motives behind European austerity, revealing the true nature of this power grab conducted on behalf of elites intent on dismantling the welfare state. Here, Iglesias delineates his political vision. He skewers not only the Spanish establishment, but also the anti-democratic bloc comprising the Troika, corporate interests, and the “Wall Street Party.”

The Extreme Centre: A Warning — Tariq Ali
Since 1989, politics has become a contest to see who can best serve the needs of the market. In this urgent and wide-ranging case for the prosecution, Tariq Ali looks at the people and the events that have informed this moment of political suicide: corruption in Westminster; the failures of the EU and NATO; the soft power of the American Empire that dominates the world stage uncontested. Ali also goes in search of alternative futures, finding promise in the Bolivarian revolutions of Latin America and at the edges of Europe. Emerging parties in Scotland, Greece and Spain, formed out of the 2008 crisis, are offering new hope for democracy.

The Muslims Are Coming!: Islamophobia, Extremism, and the Domestic War on Terror — Arun Kundnani
The new front in the War on Terror is the “homegrown enemy,” domestic terrorists who have become the focus of sprawling counterterrorism structures of policing and surveillance in the United States and across Europe. Based on several years of research and reportage this is the first comprehensive critique of counterradicalization strategies. The new policy and policing campaigns have been backed by an industry of freshly minted experts and liberal commentators. The Muslims Are Coming! looks at the way these debates have been transformed by the embrace of a narrowly configured and ill-conceived antiextremism.

Syria Burning: A Short History of a Catastrophe — Charles Glass
The Syrian civil war has claimed in excess of 200,000 lives, with an estimated 8 million Syrians, more than a third of the country’s population, forced to flee their homes. Militant Sunni groups, such as ISIS, have taken control of large swathes of the nation. The impact of this catastrophe is now being felt on the streets of Europe and the United States.Veteran Middle East expert Charles Glass combines reportage, analysis, and history to provide an accessible overview of the origins and permutations defining the conflict.

The New Old World — Perry Anderson
Anderson's The New Old World is a go to guide for anyone trying to understand the development of European Union and the overarching notion of a unified European identity. It takes into account this development from the Enlightenment up to the present. The New Old World offers a critical portrait of a continent now increasingly hailed as a moral and political example to the world at large.

For Another Europe: A Class Analysis of European Economic Integration — Guglielmo Carchedi
In this innovative work, Guglielmo Carchedi argues that only an analysis centered on class as the basic unit of social life, with production and distribution of value understood as the bedrock of the economy, can throw light on the internal contradictions of European economic integration. The book's central message is that another sort of Europe is possible, one based on the erosion of economic polarization, on the abolition of Europe's imperialist relations with the Third World, and on the creation of truly democratic institutions of self-determination.

Border Vigils: Keeping Migrants Out of the Rich World —Jeremy Harding
Ours is an era marked by extraordinary human migrations, with some 200 million people alive today having moved from their country of origin. The political reaction in Europe and the United States has been to raise the drawbridge: immigrant workers are needed, but no longer welcome. Jeremy Harding draws haunting portraits of the migrants – and anti-immigrant zealots – he encountered in his investigations in Europe and on the US–Mexico border. Harding's painstaking research and global perspective identify the common characteristics of immigration policy across the rich world and raises pressing questions about the future of national boundaries and universal values.

Bloody Nasty People: The Rise of Britain's Far Right — Daniel Trilling
The past decade saw the rise of the British National Party, the country’s most successful ever far-right political movement, and the emergence of the anti-Islamic English Defence League. Taking aim at asylum seekers, Muslims, “enforced multiculturalism” and benefit “scroungers”, these groups have been working overtime to shift the blame for the nation’s ills onto the shoulders of the vulnerable. Mainstream politicians have consistently underestimated the far right in Britain while pursuing policies that give it the space to grow. Bloody Nasty People calls time on this complacency in an account that provides us with fresh insights into the dynamics of political extremism.

The Rise of Islamic State: ISIS and the New Sunni Revolution — Patrick Cockburn
The essential “on the ground” report on the fastest-growing new threat in the Middle East from the Winner of the 2014 Foreign Affairs Journalist of the Year Award. In The Rise of Islamic State, Patrick Cockburn describes the conflicts behind a dramatic unraveling of US foreign policy. He shows how the West created the conditions for ISIS’s explosive success by stoking the war in Syria. The West—the US and NATO in particular—underestimated the militants’ potential until it was too late.

European Nations: Explaining Their Formation — Miroslav Hroch
One of the world’s leading theorists of nationalism offers a new synthesis integrating apparently competing frameworks into a coherent system that tracks the historical genesis of European nations through the sundry paths of the nation-forming processes of the nineteenth century. Combining a comparative perspective on nation-formation with invaluable theoretical insights, European Nations is essential for anyone who wants to understand the historical roots of Europe’s current political crisis.

Integrating Gender: Women, Law and Politics in the European Union — Catherine Hoskyns
Powerfully argued and strikingly mobilizing, Hoskyns’ study integrates the necessary detail of the EU’s policy on woman’s rights with current feminist theory. This combination provides a powerful critique of the current policy of the European Union.

The Question of Europe — edited by Perry Anderson and Peter Gowan
The Question of Europe collects some of the liveliest and sharpest commentary on Europe, across the full political spectrum, from leading authorities in the study of history, economics, philosophy, culture and sociology. Eminent German, Italian, French, Swedish and Irish writers are included, as well as key figures from Britain and the US. Looking paranormically at the past, present and future of integration, The Question of Europe brings polemic and scholarship together to offer us a new way of approaching the Union.