Jon Lee Anderson is a war correspondent and an investigative journalist for The New Yorker. The following is his introduction to Óscar Martínez's A History of Violence. 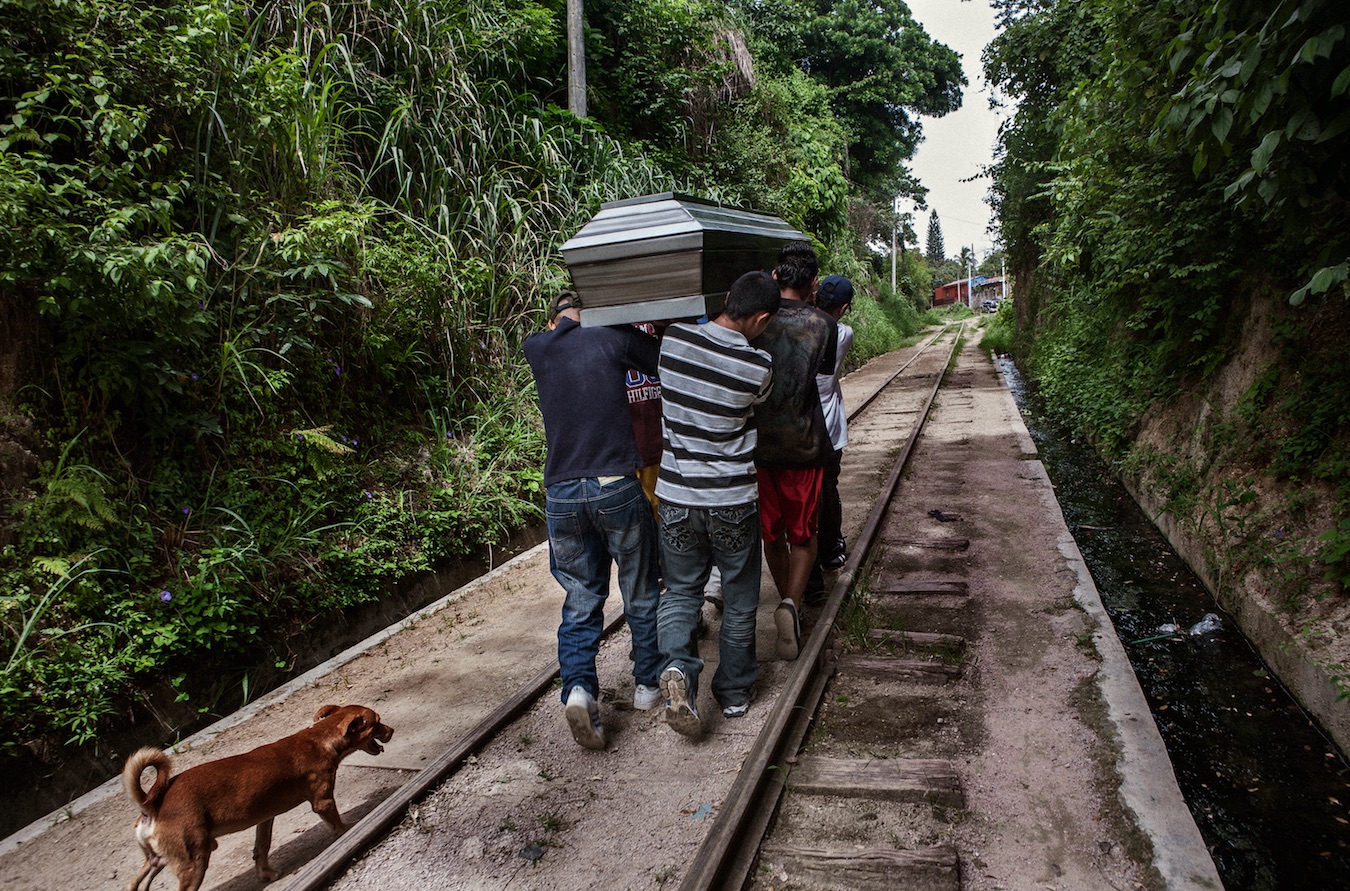 In A History of Violence, Oscar Martínez befriends a contract killer living in a small Salvadoran town. The killer, the Hollywood Kid, has ratted out numerous former accomplices to police, but, sensing that the government doesn’t care enough to protect him, he fretfully awaits his execution at their hands. The Hollywood Kid has a shotgun to defend himself, but when the moment finally comes, he is defenseless, on his way home from his baby daughter’s baptism. At the burial, Óscar is accosted by his dead friend’s enemies, who appear in the cemetery to gloat and swagger.

One night, a swashbuckling Honduran police official nicknamed El Tigre—The Tiger—with a fearsome notoriety as the leader of a death squad that executes criminal suspects, and who tells Óscar, “Everyone knows not to fuck with me,” concedes defeat as the two drive along a lonely rural stretch of the border where the narcos are more powerful than any law he could hope to impose.

Another evening, as a group of terrified families pack up their homes in a slum in the Salvadoran capital to flee a threatened massacre at the hands of a drug gang, Óscar is on the scene. A police official arrives and pleads with the families to stay. But, instead of offering security guarantees, he asks them to put their faith in God, and invites them to join him in a prayer ceremony. One of the men, powerless to alter his family’s circumstances, weeps quietly and tells Óscar of the humiliation he feels.

As he prowls the back roads, bars and police precincts of Central America in a stubborn search for truth, Óscar Martínez exhibits the instincts of a detective and the soul of a poet. His sources are window washers, prostitutes, would-be migrants, killers—sicarios—good and bad cops, judges and prosecutors. Óscar is a Marlowe in a world that is long on injustice and short on much of anything else.

Óscar’s previous book, The Beast, was a gritty firsthand chronicle of the dramatic journeys undertaken by Central American migrants on their journey northwards through Mexico to the United States.

This book, a collection of fourteen investigative pieces written by Óscar over the past several years from Central America itself, is intended to explain to Americans why it is that Central Americans flee—they don’t migrate—from their homelands, due to the violence generated there, year after year, with a great deal of American participation.

Óscar is himself a Salvadoran, and what he sees when he looks at his country, and its immediate neighbors, is a war zone. It has been that way for most of his life. Martínez was born in 1983, three years into a brutal twelve-year civil war, which by the time it ended in an impunity-for-all 1992 peace deal had killed 75,000 people and wrecked the lives of many more. But, in a sense, the conflict, in which the US played a preponderant role, never really ended. Along with former guerrillas and ex-soldiers, the offspring of returned war refugees soon formed a crazy quilt of gangs–Maras–inspired by the ones in Los Angeles, where many of them had been raised. Today criminal violence has replaced the political violence with levels of bloodshed that comes, at times, chillingly close to those of wartime. Outside of the contemporary killing grounds of Syria and Iraq, in fact, few regions are as consistently murderous as is “peacetime” Central America.

One of the main reasons for the violence is the drug trade. Just as Central America’s geography once made it a strategic battleground of the Cold War, that same geography today has determined that the region is the ultimate corridor for narcotics shipments from Colombia to the US consumer market. That fact, together with Central America’s chronic poverty and its widespread lawlessness, has turned an astonishing number of people into gangsters. Policemen, judges, and politicians are as likely to be corrupt as to be honest. There are as many as 50,000 Salvadorans directly involved in gangs and up to half a million more, out of a population of 6 million, who are economically dependent on them.

Neighboring Honduras, too, has become the stomping ground for hyper-violent drug gangs and corrupt police—and, accordingly, for the past several years, the country has had the highest murder rates of any country in the world. With El Salvador, Guatemala and Belize close behind.

To give an idea of what this means, consider the fact that the United States, usually regarded as a violent country, has a current average of 4.5 murders per 100,000 inhabitants. Honduras has 90. In 2015, El Salvador’s murder rate began to skyrocket, and, by the end of summer, with an average of one murder taking place every hour, and a tally of around 4,000 dead already for the year, it looked ready to edge Honduras out of first place. According to an August 2015 article in the Guardian, the latest murder statistics suggest that El Salvador is “twenty times more violent than the United States, ninety times more violent than Great Britain.”

Indignation over this state of affairs is partly what motivates Óscar, who runs Sala Negra, a crime investigations unit for El Faro, the groundbreaking investigative Central American online magazine based in El Salvador. A slow-burning outrage about the incapacity of the Central American states to provide protection and justice for its citizens pervades Óscar’s pieces assembled in this book.

Reporting on the flight of civilian families from the gang-threatened San Salvador slum, for instance, Óscar writes:

Breaking news this Tuesday, January 20, 2015. There is a live audience, watching as if it were a soccer game: people peeking out from their kitchen windows as they eat lunch. Live and direct: more than a dozen families fleeing their San Valentín condos in the city of Mejicanos. There are also film crews, cops directing traffic, and other idling spectators. The police are offering protection for families who have been threatened by the Barrio 18 gang. Gang members threatened to kill by tonight. The residents of San Valentín, taking the threat seriously, are now fleeing on live national television.

Óscar similarly laments the execution of the Hollywood Kid, but not because he thought he was a nice guy. He wasn’t. As he told Óscar, he’d personally killed fifty-four people, including several women. Óscar’s lamentation was over the inadequacy of the Salvadoran state, which had failed in its promise to protect its witness, who, despite his criminal past had helped bring numerous other killers to justice. “Without his help, thirty killers would be running loose in El Salvador,” writes Óscar.

In an article published in July 2015, Óscar and two of his Sala Negra colleagues, Daniel Valencia Caravantes and Roberto Valencia, reported the explosive results of their inquiry into a supposed March shootout between gangsters and police, in which eight Maras, including a young woman, were killed. They revealed that what the police had alleged was untrue, and that the Maras, as well as a couple of innocent bystanders, were murdered in cold blood. It had been a massacre, and there had been a cover-up. Even before this story broke, the Sala Negra team had received death threats, and on the day before publication, Óscar and his two coauthors left San Salvador, to be on the safe side.

On their return, the death threats continued. Óscar carried on with his reporting, but his daily routine now involved a host of new security precautions. In an email message he sent me on September 18, he promised, “I’ve taken the decision to leave the country for a period, to give my family a break from this, and some peace of mind. For me, it will be a pause in the combat.” The pause was shortlived, and it was not long before Óscar was back reporting on what for him, clearly, has become a kind of war of his own.

One senses that, in the end, what Óscar Martínez is fighting for is a reality where families like his, and those of the people he reports on, can finally live in peace, without fear of being murdered, a Central America where its citizens do not have to leave in order to survive.


This essay is the introduciton to Óscar Martínez's A History of Violence: Living and Dying in Central America.