Isolating Citizens: Sophie Wahnich on the separation of public and private freedom in France, from Le Chapelier to the Labour Law

First published in French by Libération. Translated by David Broder. 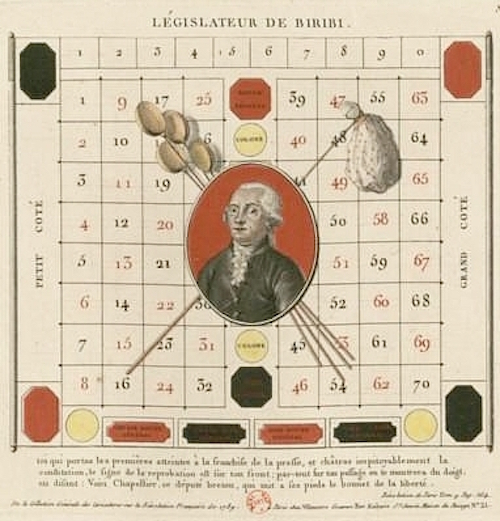 The 1789 Declaration of the Rights of Man and the Citizen is part of our constitutional bloc. It sanctions a freedom limited by the principle of reciprocity set out in its fourth article: "Freedom consists of being able to do everything that does not harm others; thus the exercise of each man’s natural rights has no constraints other than those that assure other members of society the enjoyment of these same rights. These constraints can only be determined by law."

In fact, the Constituent Assembly would produce a law that immediately contravened this article, with the 29 August 1789 law on the unlimited freedom of the sale and circulation of grain. In sanctioning property rights as natural, this law flatly denied reciprocity, for it led some to become richer and others poorer, in a dissymmetry that would only be aggravated by the lack of any controls being introduced.

Thus two conceptions of freedom coexisted in one same historical sequence, indeed setting the foundations of two ways of living in society: either a state of permanent war of all against all, through a law that favoured economic liberalism; or a civil state of reciprocal, advantageous links, as according to the fourth article of the Declaration. These two conceptions of freedom were in dispute during the French Revolution, and they still are today, because the constraints anticipated in the Constitution are in fact dependent on laws, which can be changed.

Today we have a change in the law, intent on reforming the labour code. This law, too, denies reciprocal freedom, in favour of an extreme dissymmetry between employer and employee — something that we thought was a matter of the past.

During the revolutionary period, the workers thought they had freedom of association — meaning recognition of the compagnonnages [workers/tradesmen’s associations] in the setting of wage levels. But when, in April 1791, the Paris carpenters went on strike, the city administration responded "that freedom must exist for everyone, including the masters" — that is, their freedom to set wages as they pleased. So they formed a Fraternal Union of workers, which decreed that the price for the day’s work must not fall below 50 sous, and they demanded that the city government arbitrate between them and the employers. The city government refused, declaring that wages must be decided by agreements between employers and employees, without third-party involvement.

It was thus that the Assembly passed the Le Chapelier law on 14 June 1791: one of the most hostile laws to workers ever promulgated. Again, we find an echo of this in the new Labour Law advanced by the current Manuel Valls government: the anticipated marginalisation of trade union accords — in favour of relations between an employer and their employees — follows the same logic as the Le Chapelier law. For Le Chapelier, "Not all citizens of certain professions can be allowed to join together for their supposed common interests." The Assembly moved to ban any petition addressed in the name of a profession, and any deliberation seeking to fix a price or wage. In declaring such means of action contrary to freedom and thus to the Declaration itself, it made the workers reliant on their employers’ good will. And if there were riots, then these would be incriminated for "disturbing the public peace," and the popular crowds would be broken up by force.

Here, we have another parallel between the revolutionary era and our own. In 1789 the advocates of this belligerent economic liberalism also promulgated a martial law that allowed for gatherings to be broken up by force. This martial law had certain affinities with the effects of the current state of emergency and the new anti-terrorism bill, which has expanded the boundaries of legitimate police self-defence. After three ultimatums the National Guard, the army or the gendarmes could receive the order to open fire.

Thus the association of martial law and the Le Chapelier law criminalised the popular movement. Again, today, the state of emergency will allow the criminalisation of the social movement rallying against this labour law.

At the time, few of the patriots in the Assembly protested against martial law or the Le Chapelier law — which operated in combination — but in the Ami du peuple of 18 June 1791, Marat declared that "the prohibition against association and deliberation is a means of isolating citizens and preventing them from any common involvement in public affairs."

The Declaration of 1793 clarified the normative definition of freedom in favour of reciprocity. Yet this is not part of France’s "constitutional bloc."