At 6pm on 23 April, following a day-long crowded symposium in the otherwise empty Chisenhale Gallery in London, the doors and gates were locked, and a sign affixed to the railings. The next exhibition: Maria Eichorn's 5 weeks, 25 days, 175 hours - a 5 week exhibition which gives every member of staff at the Gallery full-paid time off work to do whatever they want as long as that doesn't involve working at the Gallery. 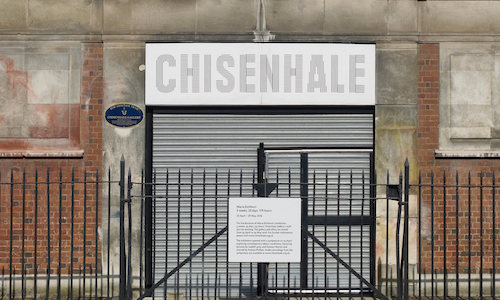 Eichorn's work investigates the intersection of contemporary economic and social conditions. To accompany the exhibition, the Chisenhale Gallery have produced a catalogue featuring reflections on Eichorn's work from Stewart Martin and Isabell Lorey - which is reproduced below. For the full catalogue and for more information about the exhibition visit the Chisenhale Gallery's website.

To have no time, to tirelessly do more at once, to become increasingly flexible, to constantly change goals, plans, preferences – and to earn less and less. All this characterises neoliberal work and life. And furthermore, it describes central aspects of subjectivation in an economy of debt.

To accept jobs at minimal or no wage at all; to work, precariously and indebted, in and with institutions that demand precisely this – even the most progressive ones; to put up with de-waging in the present only because it is imagined as speculation with oneself in a secure future of abundant cultural capital… A personality shaped by moral and financial debt, a personality doubly indebted in this way is both an effect and a linchpin of today’s politico-economic regime of precarisation, which reveals itself in an extreme form in the cultural and academic field, but extends far beyond it.

How can these economies be interrupted? Might we be able to exit from accelerating indebtedness with more time?

In contemporary capitalism, we are experiencing a diffusion of work into life and at the same time an increasing de-waging of work. Wages are sinking, while hours spent working are on the rise. Working time no longer covers only tasks that are paid, but tends to encompass all social doing. Work is becoming excessive and simultaneously negated as work that should be paid, especially when it comes to creative and cognitive work. The neoliberal ideology of ‘life-long learning’, with its activating force, has extended the time of education beyond school and university degrees. The promise of learning something while at work legitimises the nonpayment of that work, not only for the institution in which it is performed. Especially in the Anglo-Saxon world it has become normal for the ‘learner’, too, to become not only more and more financially indebted, but also to incur moral debts for the duration of one’s increasingly long education. As if one were to owe something to the particular institution, because skills are trained. The interlacing of knowledge and debt characterises central aspects of contemporary modes of production.