"The hegemonic powers of the EU have gone one step too far": On governing borders and the right to move

As Refugee Week approaches on the 20th June, we publish Anna Papoutsi’s case for refugees’ right to move, following the ‘one in, one out’ deal struck between the EU and Turkey. Papoutsi argues that the new deal produces new categories of deservedness for refugees and that it ultimately poses a threat the EU’s entire post-WWII legal construct. Anna Papoutsi is a PhD student based at the University of Birmingham, co-author of “Crisis or Zemblanity? Viewing the ‘Migration Crisis’ through a Greek Lens” and a member of the collective research project Transcapes. 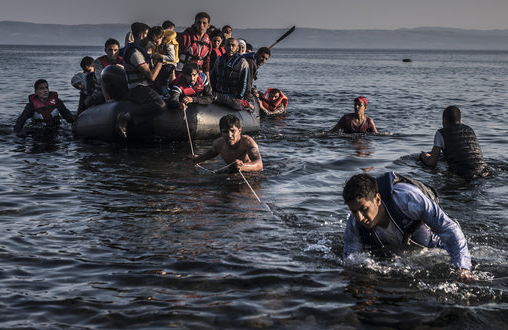 Soon after the March 18 EU-Turkey deal, the first boats began returning migrants from Greece to Turkey. The previous migration and border regime run by the EU and parts of the international community had officially ceased to operate. An emerging new border regime now produces new categories of deservedness and differentiated inclusion and exclusion. Who deserves international protection? Where is safe? What does it mean to be inside the EU territory? Where is this ‘inside’ to be found, and what marks the transition from the outside?

During 2015 and in the first months of 2016, over one million people directly challenged the EU border regime, completely overturning the EU’s decision-making mechanisms.[1]Greece, and the island of Lesbos in particular, has largely been the main theatre of this border drama and the everyday struggles of transitioning populations. This year has also seen unprecedented solidarity coming from locals. It is clear that the refugee crisis is one more manifestation of the struggle between hegemonic powers (EU, nation-states) and populations (local, migrant) over spaces and the right to move. In a spectacular and powerful moment in history, we saw a new articulation and understanding of the right to move. People arriving at the shores of Lesbos made themselves visible and said “we are here, you have to acknowledge us and let us pass, open the border”. They claimed for themselves the right and opportunity to move and to move on. In an effort to govern the unease among various member-states and the public opinion, the EU commission instrumentally used Greece’s weak position to regain control over people’s mobility.

As we have claimed before[2], the construction of a refugee crisis on top of Greece’s own financial and institutional crisis, once again consolidates the country’s role as the undeserving EU member-state. The reiteration of such a role consolidated the Greek territory as a space of specific interventions and contestations, a space that is neither inside nor outside the EU. This liminal condition allowed for the swift introduction and spread of the hotspot mechanism on European soil. First conceptualised as a one-stop-shop by the EU Commissioner for Migration, Home Affairs and Citizenship, Dimitris Avramopoulos, in order to tackle flaws and backlogs in the national asylum-seeking systems. Hotspots have become the main apparatus – along with the Emergency Relocation Mechanism and the new European Border and Coast Guard – in the EU’s emerging border regime. Hotspots may be the specific loci of implementation and unfolding of the emerging regime. They are a sorting mechanism for categorising people and allocating deservedness accordingly and a filter for governing the unwanted (and the wanted). However, the entire Greek territory is turning into a container for the undeserving, a space for their management, which due to its own undeservedness, is easily imagined as the appropriate place for such border function.

Borders have historically been developed for military purposes and have been an important tool for state-, nation- and identity- building. They have been there to demarcate state sovereignty and to (re)produce ideas of national identity and belonging in a specific polity. In this context, the enemy has always been other states. This state-centric approach has created the illusion of impenetrable borders and an ensuing awe in their face. Yet today it is mostly immigration control and counter-terrorism that transform and produce borders. Both are constructed as border related threats and, in this way, the enemy becomes certain categories of people. Borders are (re)produced as the hegemonic powers strive to gain control over mobility of populations, creating at the same time hypermobile people, while immobilising others or forcing them to move. The border becomes a filter for the unwanted but also a device that continuously produces new categories of belonging and deservedness (i.e. by rendering people illegal).

This function of the border does not necessarily take place at the geographical location marked by a state’s boundary and it cannot be fulfilled with the building of walls. Although such physical barriers definitely play their part in this system of hierarchised mobilities and inclusion and have an immense death toll. In this sense, Fortress Europe, so commonly invoked both in academia and activism, might not be the most appropriate way of imaging EU’s borders, mostly because it creates the illusion of a safe “inside” of deserving and equal citizens and a dangerous “outside” of undeserving people. The hotspot apparatus could not offer a better insight into this out-dated view of the border. Situated within EU territory but stripped of state sovereignty, it is more of a supra-state jurisdictional space that governs deservedness, mobility and inclusion[3].

While it still remains highly unclear who will deserve protection and the right to move across space from now on, what has become apparent to many of us is that, in their constant war against the peoples, the hegemonic powers of the EU have gone one step too far, directly threatening the entire post-WWII legal construct of the EU.

[1] For an interesting account of the negotiations during the past months and how the EU-Turkey deal came to be see Fotiadis, A., “How the EU - Turkey Deal Came to be”, in Analyze Greece)

[2] Christodoulou, Y., Papada, E., Papoutsi, A. and Vradis, A. (2016), “Crisis or Zemblanity: Viewing the ‘Migration Crisis’ through a Greek Lens”, Mediterranean Politics