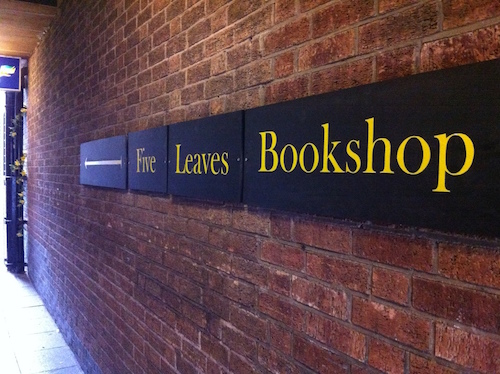 Five Leaves started life as a publisher - founded in 1996, they have since published around 200 literary, political, social history and other titles. In October 2013 they secured a lease on Nottinham’s 14a Long Row, and in November they opened a bookshop with a strong emphasis on independent publishing, selling their own titles as well as many others.

Five Leaves Bookshop hosts their very own mini-festival, Bread and Roses – probably the only book festival funded by trade unions – and they also set up the Bread and Roses Award for Radical Publishing. They work with dozens of local community groups including trade unions, Quakers, Nottingham Irish Studies Group, Nottingham Women’s History and various departments at our two local universities.

You can visit them online here, and if you pop into Five Leaves on Saturday 25th you can pick up your own VERSO TOTE BAG filled with VERSO GOODIES! (whilst stocks last. More info here)

Nocilla Dream by Agustin Fernandez Mallo (Fitzcarraldo Editions, 2015)
Forgive the cliché, but Agustín Fernández Mallo’s Nocilla Dream is not like anything you have ever read before. The book was born out of a combination of the author reading an article about a unique tree, a sugar sachet from a Chinese restaurant that had written on it Yeats’ verse ‘All changed, changed utterly: / A terrible beauty is born’ and the Siniestro Total song ‘Nocilla, que Merendilla!’ (Nutella, what a great snack!). An eclectic mix of influences which sets the scene nicely for what is to be found within the book. Combining factual information,  popular culture references, fiction and poetry, Nocilla Dream is made up of 113 fragments which are smoothly woven together by the shoelaces of abandoned shoes hanging from the only tree to thrive for miles, in the middle of the North American desert roads (all will become clear to the reader).

“Hello, I’m here”: The True Stories of Nottingham’s Prostitutes (Hello, I’m here Project, POW & Platform 51, 2012)
A raw and powerful collection of writing by people who are or have been involved with prostitution. It includes artwork, poetry and stories, which reveal the hard reality of prostitution and drug use, and is told from the perspective of those who often lack a voice in society. A brave, striking collection of voices that demand to be heard.

Anarchy in Action by Colin Ward (Freedom Press, 1998; 1973)
Though this was first published in 1973, Anarchy in Action, is still the best primer for people who want to know what anarchism is - even though some examples are not taken by people who are consciously anarchists. For Colin Ward it mattered only what people did rather than what label they stuck on themselves. All of Ward's examples are positive experiences of self-management with inspiration being the result of doing something for yourself and others.

Vida by Marge Piercy (Merlin Press, 2012; 1979)
Vida was originally published in 1979 - this reviewer used to read the book almost every year. Piercy's novel is the story of one Vida Asch, whose opposition to the Vietnam War in America led to her having to go underground. Her story is loosely based on the Weathermen. On the run, Vida tries to keep her organisation together, staying in touch with the scattered remnants, whilst also trying to retain her own sanity and relationships in a world cut off from the mainstream.

Cranks Recipe Book by David Canter (Orion, 2013; 1982)
When this was first published in 1982 (by Panther, in a mass-market paperback) vegetarians at last found a readily available cookbook with recipes that you could actually serve up to suspicious carnivores or at least make food that you yourself wanted to eat, as opposed to had to eat. The Cranks restaurant itself is long gone (the brand is now owned by Nando's!) but the Cranks Recipe Book is still out there. And to make the recipes you won't need a dictionary or access to a celebrity chef's store cupboard!