Today we are in Kings Cross, London with… Housmans! 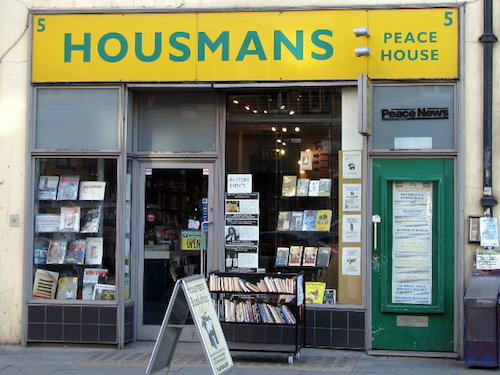 Housmans Bookshop was one of London’s very first radical bookshops: the shop as it stands today originally opened in 1945, but its roots, go back to the great upsurge of the British pacifist movement in the 1930s. In the aftermath of the Second World War the writer and playwright Laurence Housman suggested that the Peace Pledge Union (of which he was a member) should establish a permanent bookshop to promote ideas of peace, human rights and a more equitable economy. Whilst acknowledging its roots in this peace movement, Housmans aims to be a broad-based, non-sectarian shop, encouraging the dissemination of a wide range of progressive and alternative ideas. As recognised by Laurence Housman himself, opposing injustice and oppression and the degradation of our planet are prerequisites of a more peaceful society.

Doing Nothing is Not An Option by Margaret Andrews (Krik Krak 2014)
An important and entertaining account of the lives of two of the UKs pioneers in black publishing and bookselling. Their work should be widely celebrated, particularly so during Independent Bookshop Week.

Capitalism: What is it and how can we destroy it? by Shahin (Corporate Watch, 2016)
Keeping the spirit of independent publishing highlighted with this choice, published by the always first-rate Corporate Watch. An excellent overview of capitalism: how it came to be, how it works, how it fails, and where it’s weakness can best be exploited.

Waging Nonviolent Struggle by Gene Sharp (Extending Horizons Books, 2005)
The one book you ever need for understanding nonviolent struggle. Filled with history, theory, as well as practical steps for nonviolent activism, Sharp’s work is insightful and readable, and it has proven to be both highly influential and effective in challenging the most powerful regimes in the world. You are unlikely to find this in any bookshop in the UK other than Housmans.

Delusions of Gender by Cordelia Fine (Icon Books, 2010)
By exposing the flaws and biases of neuroscientific research, psychologist Cordelia Fine irreverently debunks the myth that biology lies at the heart of differences between the sexes. An essential corner stone of gender studies reading.

The Red Virgin and the Vision of Utopia by Mary and Bryan Talbot (Jonathan Cape, 2016)
A rousing and inspiring read, this newly published graphic novel by husband and wife team Mary and Bryan Talbot is based on the life of the revolutionary feminist Louise Michel, ‘The Red Virgin of Montmartre’, who courageously fought on the barricades defending the Paris Commune in 1871.