In light of the result of the EU referendum, we publish Antonis Vradis’ piece comparing the Greek and British EU referenda. Vradis makes the case for the necessity of a left resurgence after the reactionary far right Brexit campaign. Vradis is a geographer at Durham University, looking at Europe's urban transformations under austerity, and also at how the management of the migrant crisis is transforming the continent - as part of the Transcapes collective. He blogs at The Slow. 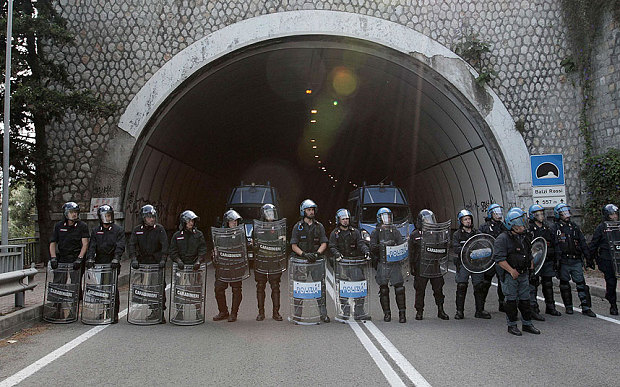 Pretty much exactly one year ago, me and a group of friends found ourselves in a remote village in the countryside of the Peloponnese, watching with awe and some admitted excitement as Alexis Tsipras was announcing a surprise referendum on something whose wording didn’t quite help one understand what it was about. Yet most of us took this as a veiled suggestion, a hint at questioning Greece’s place in the euro (and potentially the EU), and voted accordingly. This is where the similarities with Britain’s turbulent moment lie: the majority of the Greek population, just like the British one yesterday, did bite the bullet and voted against both what the status quo had paternally asked for, against what was perceived to be its own self-interest.

But this is also pretty much where the similarities end. The Brexit vote was led by nationalism and racism, as we saw: the fictitious “migrant influx” into the UK elevated to a major national calamity that has to be avoided by any cost. We chilled as we watched the Nazi-reminiscent propaganda and gasped at the frivolous way in which the dominant discourse sank into a vile anti-foreigner rant. In this sense there is, of course, nothing to immediately celebrate about yesterday’s vote. The most reactionary side has won. But what was the other side ever about? Why did the progressive voices of Britain―and much of Europe as a whole―largely uncritically align themselves with the likes of David Cameron, Martin Schulz and all those Heroes of the People?

A vote for Bremain would not have averted the current trajectory of the European Union mechanism, which is way worse than merely vile xenophobia. It is what leads to this xenophobia, building up a mechanism that forms and perpetuates a colonial-like injustice across the continent. This not only by dramatically altering the relationship between member-states (a dangerous argument at such, as it plays into the far-right propaganda itself), but also and primarily by exacerbating the class divide: creating jaw-dropping super-rich and an abysmal super-precariat in all member-states, at a staggering level each country on its own would never be able to produce.

“Vote Remain to keep the far-right genie in the box, then we can talk progressive EU reform” went the liberal line of argument, if I got it right. It’s because of “the urgency of the times”, we were told. “Make sure we can weather just this one last storm, and then we can talk it all through”, and so on and so forth. But these two simple words, “and then” can only come from those who have the luxury to wait. And there’s clearly not as many around any more. So, a nice and well-intended try, but it will no longer cut it. The EU has morphed itself into a gigantic, monstrous mechanism that is destroying the livelihoods and the prospects of millions in its fringes. Not in some distant future: this is happening right now. And not in some far-fetched, run-down province or suburb: the fringe has now taken centre-place.

By a funny twist of history interlacing with personal life, me and largely the same group of friends find ourselves in the same Peloponnesian village in the morning Britain awakens to the Brexit shock. There is already the smirking suggestion that any vote going against the establishment will be declared void, that Britain will “do a Tsipras” and chose to simply ignore what happened. What shocks and saddens me the most is that the liberal and progressive forces in the country are already quick to line themselves behind this suggestion, unable to understand the colossal disregard of popular opinion it presumes and demands.

Brexit was instigated and celebrated by the vile and reactionary forces of the far-right. But this does not refute the fact that too many of us have mistaken a bureaucratic mechanism perpetuating injustice for the land mass and the 330m people that make up Europe. If there is anything of a formidable progressive force left in our continent that is able to capitalise on a historical opportunity dawning upon us, it must stop shedding tears for the bureaucratic European Union monster that fades away, and help strike the final blow instead.