40% off EVERYTHING!
about 1 month left
Keeanga-Yamahtta Taylor
comments

For more than a year, the Black Lives Matter movement has gripped the United States. The movement’s central slogan is a simple, declarative recognition of black humanity in a society that is wracked by economic and social inequality disproportionately experienced by African Americans. 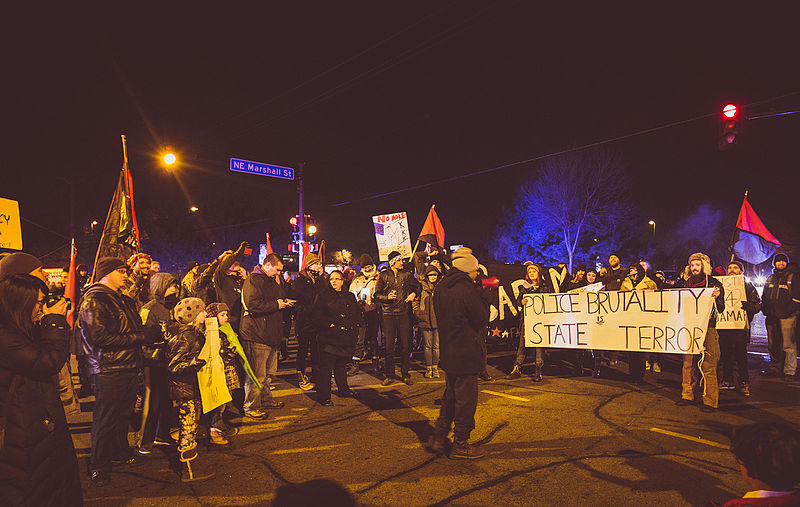 The movement is relatively new, but the racism that spawned it is not. By every barometer in American society — health care, education, employment, poverty — African Americans are worse off.

Elected officials from across the political spectrum often blame these disparities on an absence of “personal responsibility” or view them as a cultural phenomenon particular to African Americans.

In reality, racial inequality has been largely produced by government policy and private institutions that not only impoverish African Americans but also demonize and criminalize them.

Yet racism is not simply a product of errant public policy or even the individual attitudes of racist white people — and understanding the roots of racism in American society is critical for eradicating it.

Crafting better public policy and banning discriminatory behavior by individuals or institutions won’t do the job. And while there is a serious need for government action barring practices that harm entire groups of people, these strategies fail to grasp the scale and depth of racial inequality in the United States.

To understand why the United States seems so resistant to racial equality, we have to look beyond the actions of elected officials or even those who prosper from racial discrimination in the private sector. We have to look at the way American society is organized under capitalism.

Capitalism is an economic system based on the exploitation of the many by the few. Because of the gross inequality it produces, capitalism relies on various political, social, and ideological tools to rationalize that inequality while simultaneously dividing the majority, who have every interest in uniting to resist it.

How does the one percent maintain its disproportionate control of the wealth and resources in American society? By a process of divide and rule.

Racism is only one among many oppressions intended to serve this purpose. For example, American racism developed as a justification for the enslavement of Africans at a time when the world was celebrating the concepts of liberty, freedom, and self-determination.

The dehumanization and subjection of black people had to be rationalized in this moment of new political possibilities. But the central objective was preserving the institution of slavery and the enormous riches that it produced.

Direct slavery is just as much the pivot of bourgeois industry as machinery, credits, etc. Without slavery you have no cotton; without cotton you have no modern industry. It is slavery that has given the colonies their value; it is the colonies that have created world trade, and it is world trade that is the pre-condition of large-scale industry. Thus slavery is an economic category of the greatest importance.

the discovery of gold and silver in America, the extirpation, enslavement and entombment in mines of the aboriginal population, the beginning of the conquest and looting of the East Indies, the turning of Africa into a warren for the commercial hunting of Black skins, signalized the rosy dawn of the era of capitalist production.

The labor needs of capital alone could explain how racism functioned under capitalism. The literal dehumanization of Africans for the sake of labor was used to justify their harsh treatment and their debased status in the United States.

This dehumanization did not simply end when slavery was abolished; instead, the mark of inferiority branded onto black skin carried over into Emancipation and laid the basis for the second-class citizenship African Americans experienced for close to a hundred years after slavery.

The debasement of blacks also made African Americans more vulnerable to economic coercion and manipulation — not just “anti-blackness.” Coercion and manipulation were rooted in the evolving economic demands of capital, but their impact rippled far beyond the economic realm. Black people were stripped of their right to vote, subjected to wanton violence, and locked into menial and poorly paid labor. This was the political economy of American racism.

There was another consequence of racism and the marking of blacks. African Americans were so thoroughly banished from political, civil, and social life that it was virtually impossible for the vast majority of poor and working-class whites to even conceive of uniting with blacks to challenge the rule and authority of the ruling white clique.

Marx recognized this basic division within the working class when he observed, “In the United States of America, every independent movement of the workers was paralyzed as long as slavery disfigured a part of the Republic. Labor cannot emancipate itself in the white skin where in the Black it is branded.”

Marx grasped the modern dynamics of racism as the means by which workers who had common objective interests could also become mortal enemies because of subjective — but nevertheless real — racist and nationalist ideas. Looking at the tensions between Irish and English workers, Marx wrote:

The ordinary English worker hates the Irish worker as a competitor who lowers his standard of life. In relation to the Irish worker he feels himself a member of the ruling nation and so turns himself into a tool of the aristocrats and capitalists of his country against Ireland.

This antagonism is artificially kept alive and intensified by the press, the pulpit, the comic papers, in short by all the means at the disposal of the ruling classes. This antagonism is the secret of the impotence of the English working class, despite its organization. It is the secret by which the capitalist maintains its power. And that class is fully aware of it.

For socialists in the United States, recognizing the centrality of racism in dividing the class that has the actual power to undo capitalism has typically meant that socialists have been heavily involved in campaigns and social movements to end racism.

But within the socialist tradition, many have also argued that because African Americans and most other nonwhites are disproportionately poor and working class, campaigns aimed at ending economic inequality alone would stop their oppression.

This stance ignores how racism constitutes its own basis for oppression for nonwhite people. Ordinary blacks and other nonwhite minorities are oppressed not only because of their poverty, but also because of their racial or ethnic identities.

There is also no direct correlation between economic expansion or improved economic conditions and a decrease in racial inequality. In reality, racial discrimination often prevents African Americans and others from fully accessing the fruits of economic expansion.

After all, the black insurgency of the 1960s coincided with the robust and thriving economy of the 1960s — black people were rebelling because they were locked out of American affluence.

Looking at racism as only a byproduct of economic inequality ignores the ways that racism exists as an independent force that wreaks havoc in the lives of all African Americans.

The struggle against racism regularly intersects with struggles for economic equality, but racism does not only express itself over economic questions. Antiracist struggles also take place in response to the social crises black communities experience, including struggles against racial profiling, police brutality, housing, health care, educational inequality, and mass incarceration and other aspects of the “criminal justice” system.

These fights against racial inequality are critical, both for improving the lives of African Americans and other racial and ethnic minorities in the here-and-now; and for demonstrating to ordinary white people the destructive impact of racism in the lives of nonwhite people.

Winning ordinary whites to an antiracist program is a key component in building a genuine, unified mass movement capable of challenging capital. Unity cannot be achieved by suggesting that black people should downplay the role of racism in our society so as not to alienate whites — while only focusing on the “more important” struggle against economic inequality.

This is why multiracial groupings of socialists have always participated in struggles against racism. This was particularly true throughout the twentieth century, as African Americans became a more urban population in constant conflict and competition with native-born and immigrant whites over jobs, housing, and schools.

Keeanga-Yamahtta Taylor is the author of From #BlackLives Matter to Black Liberation and writes on Black politics, social movements, and racial inequality in the United States. Her articles have been published in Souls: A Critical Journal of Black Politics,Culture and Society, Jacobin, New Politics, the Guardian, In These Times, Black Agenda Report, Ms., International Socialist Review, Al Jazeera America, and other publications.

- This essay is taken from The ABCs of Socialism edited by Bhaskar Sunkara. You can read the rest of Keeanga-Yamahtta Taylor's essay in Jacobin.