The Great Fire of Democracy

At what point will the panes shatter from the noise of the fighter jets? When will the approaching shots be at the door? Award-winning Turkish journalist, Ece Temelkuran, author of Deep Mountain and most recently Turkey: The Insane and the Melancholy (Zed Books, 2106), responds to the attempted coup on Friday 15th July when the Turkish military tried and failed to overthrow Erdoğan.

This article originally appeared in German in Frankfurter Allgemeine and is translated by Flossie Draper. 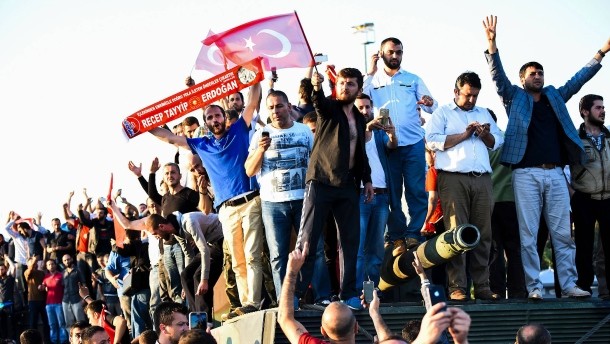 Istanbul the morning after the great fire of democracy

Sela is called from the mosques

It is half past one in the morning, and from all the minarets in Turkey, this special, long call to prayer, which is used at times of death, resounds unrelentingly. As one ends, already the next starts up. The thundering of the fighter jets over our roofs mingles with this marrow-piercing call to prayer that for us heralds death. As the noises of battle turn to silence, announcements come from the mosques, calling for resistance against the military: “This is a Jihad. Take to the streets, for Allah!”

What do you do when you ask yourself whether the next morning you are going to wake up in the midst of a military coup or in an Islamic Republic?

That was a joke.

People in Turkey have long been testing the boundaries of humour to preserve their sanity. Sarcasm reaches unimagined heights. I don’t know whether that is a sign of pathological sensibility, or whether people are just simply trying to cope with life, yet while we ask ourselves at what point the panes will shatter from the noise of the fighter jets, when the approaching shots will be at the door, on social media, the single place where we talk to one other, jokes circulate: “The Turkish Republic is dead; that’s why the sela is called.”

At first it was actually almost comical; it made more sense to believe it was a staged act. A handful of baffled young soldiers had blocked off one of the Bosphorus bridges. “Go home!”  they bellowed at the people. I have written a novel on the military coup from 1980; I know no coup passes off like that. A coup is a serious affair. People who had lived to see coups immediately wrote on social media, “Erdoğan is playing a game: he says, ‘They’re staging a coup against me,’ and the next day declares himself president.”

The matter became more serious when Erdoğan appeared on the television channels via the chat service FaceTime and called upon the population to take to the streets in order to protect democracy. I was convinced that no one who knew from collective memory how brutal coups are would take to the streets. Yet within a few minutes, the streets were filled with entire cars of people shouting, “Allahu Ekber — God is great!”  An absurd sight.

We were afraid during the night leading into Saturday

At the airfield, people kicked tanks, civilians took young, barely resisting soldiers hostage; there were even lynchings against soldiers. The cries of Allahu Ekber could soon also be heard on CNN Türk. About an hour after the anchorwoman had said, “Soldiers are storming the station,” we saw on the screen not soldiers with a declaration of the coup, but rather a peculiar young man, most probably an Erdoğan supporter. He cried “Allahu Ekber” into the camera three times and then sat down, bored. The whole country watched this man in the pink T-shirt, who occupied himself with his smartphone and attempted to start up the broadcaster’s TV sets with the remote control. All the while, we pressed cushions against the window-panes, which were quivering from the droning of the fighter jets. Nothing new for us; grief and fear are continually broken by absurdity where we are.

We were afraid during the night leading into Saturday. Only the president was not. His plane had long been circling in the air; when it finally landed at Atatürk Airport in Istanbul, among the thousands of people who were waiting for him there was also his son-in-law, our Energy Minister, Bilal Albayrak. While the coup attempt, instigated by a handful of generals, slid into chaos, while fighter jets bombed the parliament building in Ankara, while history buffs drew comparisons to the Reichstag, what was striking was how calmly the two of them reacted: “This is a blessing from Allah. Why? Because this occurrence will ensure a purge of our armed forces.”

Translated by Flossie Draper from Sabine Adatepe’s German translation of the original Turkish.