The controversial banning of the "Burkini" by several French municipalities last week - and it's overturning by the state council - has once again brought the question of what laïcité actually means, and who it works for, in contemporary France. In this short article, originally published in Libération and translated here by David Broder, Etienne Balibar traces the vicissitudes of the concept to show how we have ended up with the "monster of identitarian laïcité". 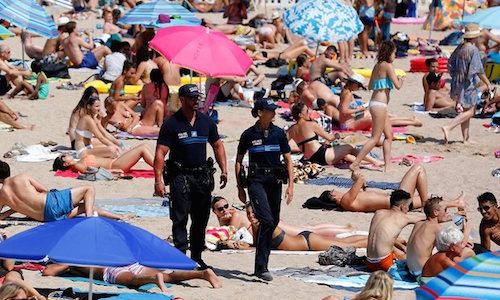 Thanks to the state council’s ruling we will avoid seeing a morality police in France. This would have been a morality police charged not with forcing women to wear the veil, but forcing them to take it off. As far as possible, the exercise of liberties must be prioritised over the requirements of public order, which by definition restrict these freedoms. In a democracy women’s rights are a matter of their own decisions, not an interpretative framework imposed upon their behaviour, ‘forcing them to be free’. Laïcité is an obligation on the state to show its neutrality towards citizens, not an ideological obligation on citizens toward the state.

Like many others I consider these to be fundamental arguments. They strike a blow against the attempt to exploit the feelings aroused by the series of attacks perpetrated in the name of Islam, in the effort to combine a fundamentalist laïcisme [the imposition of non-religious behaviour]with a strategy for exacerbating nationalism. They instead call for a counter-offensive. The proposal for legislation – a fresh step in banning signs of religious belonging from the public sphere – would be more important than the guerrilla campaign against the judicial order currently being waged by certain elected officials. The stakes will be all the higher, since it is becoming clear that such legislation does not only require the revision of the constitution, but would mean that we are drifting from the state founded on the rule of law to the state of exception.

Just as important are the implications this would have for how laïcité is conceived and instituted. But here a difficulty begins to arise, which requires some philosophical elucidation. We need a ‘genealogical’ work on what laïcité was in France in the past, and what it is becoming in the present moment. That should provide us a basis for debating what about it should be preserved, expanded or restored, but also what should be reformed so that its fundamental meaning is not turned against itself.

Historically the idea of laïcité in France was divided between two conceptions, both of which emerged from the centuries-long clash between Catholicism and republicanism. Régis Debray baptised them the ‘republican’ and ‘democratic’ conceptions. However, this alternative is not a satisfactory one, since there are democratic elements on each side, and both of them belong to the republican tradition. I will say that the first one – of distant Hobbesian inspiration – is statist and ‘authoritarian’, whereas the second, partly derived from Locke’s thinking, is liberal and even ‘libertarian’ in tendency. The first integrates laïcité as an essential part of the ‘normative’ primacy of public order over private opinions and activities, whereas the second poses the autonomy of civil society – to which freedom of conscience and expression correspond – as a norm of which the state must be the servant and guarantor. The 1905 law separating Church and state did not so much mark the victory of the second over the first, as a correction of the anti-clerical projects for ‘laïcising society’ by means of guarantees for individual and collective freedoms. This evidently allows it to be invoked whenever the very existence of state laïcité, or its democratic character, was under threat.

Unlike some very fine interpreters, I do not think that the ‘identitarian laïcité’ whose programme we today see being elaborated on both the Left and Right of the political chessboard represents a simple accentuation of the Hobbesian inheritance, or its revenge over the liberal interpretation. That is true even though I well see which arguments have favoured the instrumentation of a juridical, moral, pedagogical conception of public authority, and its slippage toward the idea of an ‘order of values’ baptised as republican and secularyet in reality nationalist and Islamophobic. I think that something like a mutation has taken place.

Indeed, the symbolic equation underlying identitarian laïcité should be grasped in its full extent. This equation poses that the Republic’s identity resides in its laïcité and, in correlation with this, laïcité must serve the assimilation of foreign-origin (to put it more clearly, that means colonial and postcolonial) populations who on account of their religious beliefs are still liable to constitute a ‘foreign body’ within the nation. Obsessed by the need to build a dam against ‘communalism’, it in fact comes to constitute (through ‘values’ but also cultural prohibitions and norms) a state communalism. But more serious still – above all in the current conjuncture – is the fact that the symmetrical opposite, or inverse synonym of assimilation is acculturation. Yet this notion is the very spearhead of the Islamic-fundamentalist ideological offensive which denounces the grip of ‘Christian’ and ‘secular’ civilisation over the Muslim communities of Europe (and ‘modernised’ Arab-Muslim societies), even using it – as we can read on various websites – as a means of legitimising jihad.

The construction of laïcité as a national, collective identity – underpinned by the idea that republicanism supposes assimilation (and not only integration into social life and the fulfilment of civic obligations) – is thus drawn into mimetic rivalry with the very same totalitarian discourse that French politics simultaneously claims to be arming itself against. The least we can say is that such a construct will not serve either for understanding the nature of the dangers faced, nor – since ‘we are at war’ – forging solidarity among citizens.

Evidently, the emergence of this ‘monster’ that is identitarian laïcité is a phenomenon that cannot be isolated from the multiple tendencies toward the exacerbation of nationalisms and the ‘clash of civilisations’ taking place in the world today, indeed in association with extreme violence. Yet it takes a specific form in France. It deeply troubles us because it tends to invert the political function of a principle that has played an essential role in our political history: at its worst, a certain laïcisme has taken the place once occupied by clericalism. It is vital that we react to this. But we have to understand what is taking place, redraw the ‘fronts’ and not fight the old battles over again in identical fashion.