Discount for supporters of Insurrections documentary

To thank you for your support of Insurrections: A Film on the Thinking in Today's Struggles we are offering the following titles at a discounted price. 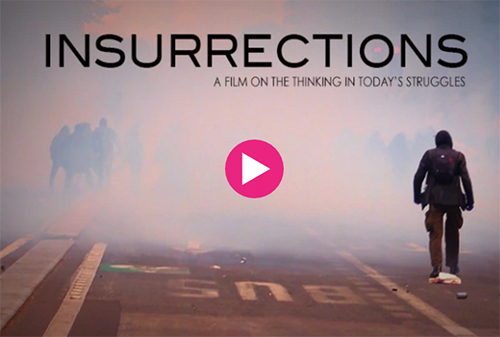 Crowds and Partychannels the energies of the riotous crowds who took to the streets in the past five years into an argument for the political party. Rejecting the emphasis on individuals and multitudes, Jodi Dean argues that we need to rethink the collective subject of politics. When crowds appear in spaces unauthorized by capital and the state—such as in the Occupy movement in New York, London and across the world—they create a gap of possibility. Dean shows how we can see the party as an organization that can reinvigorate political practice.

Baltimore. Ferguson. Tottenham. Clichy-sous-Bois. Oakland. Ours has become an “age of riots” as the struggle of people versus state and capital has taken to the streets. Award-winning poet and scholar Joshua Clover offers a new understanding of this present moment and its history. Rioting was the central form of protest in the seventeenth and eighteenth centuries, and was supplanted by the strike in the early nineteenth century. It returned to prominence in the 1970s, profoundly changed along with the coordinates of race and class. As social unrest against an unsustainable order continues to grow, this valuable history will help guide future antagonists in their struggles toward a revolutionary horizon.

The Age of the Poets: And Other Writings on Twentieth-Century Poetry and Prose
by Alain Badiou
Translated by Bruno Bosteels
Introduction by Emily Apter and Bruno Bosteels

The Age of the Poets revisits the age-old problem of the relation between literature and philosophy, arguing against both Plato and Heidegger’s famous arguments. Philosophy neither has to ban the poets from the republic nor abdicate its own powers to the sole benefit of poetry or art. Instead, it must declare the end of what Badiou names the “age of the poets,” which stretches from Hölderlin to Celan. Drawing on ideas from his first publication on the subject, “The Autonomy of the Aesthetic Process,” Badiou offers an illuminating set of readings of contemporary French prose writers, giving us fascinating insights into the theory of the novel while also accounting for the specific position of literature between science and ideology.

Philosophy for Militants
by Alain Badiou
Translated by Bruno Bosteels

An urgent and provocative account of the modern “militant,” a transformative figure at the front line of emancipatory politics. Around the world, recent events have seen the creation of a radical phalanx comprising students, the young, workers and immigrants. It is Badiou’s contention that the politics of such militants should condition the tasks of philosophy, even as philosophy clarifies the truth of our political condition.

To resolve the conflicts between politics, philosophy and democracy, Badiou argues for a resurgent communism – returning to the original call for universal emancipation and organizing for militant struggle.

For more information on Insurrections: A Film on the Thinking in Today's Struggles check out the IndieGoGo campaign.