We are excited to announce the latest set in our Radical Thinkers series — four classic works from leading black radical intellectuals — publishing on November 15th.

Angela Davis’s collection of voices, originally published in 1971 is introduced as ‘an explosive document that is truly of and for our time’, but proves to be a text just as necessary in today's political climate. Manning Marable’s highly acclaimed reflection on African-American politics brings us into the more recent past, with a response to Barack Obama and the question of a ‘Post-Racial Politics’. From WEB Du Bois’s autobiographical essay Darkwater, to Michele Wallace’s consideration of the late-twentieth century black female experience in America, these are essential texts in both our series of radical thinkers, and in studying and celebrating African and Caribbean history. 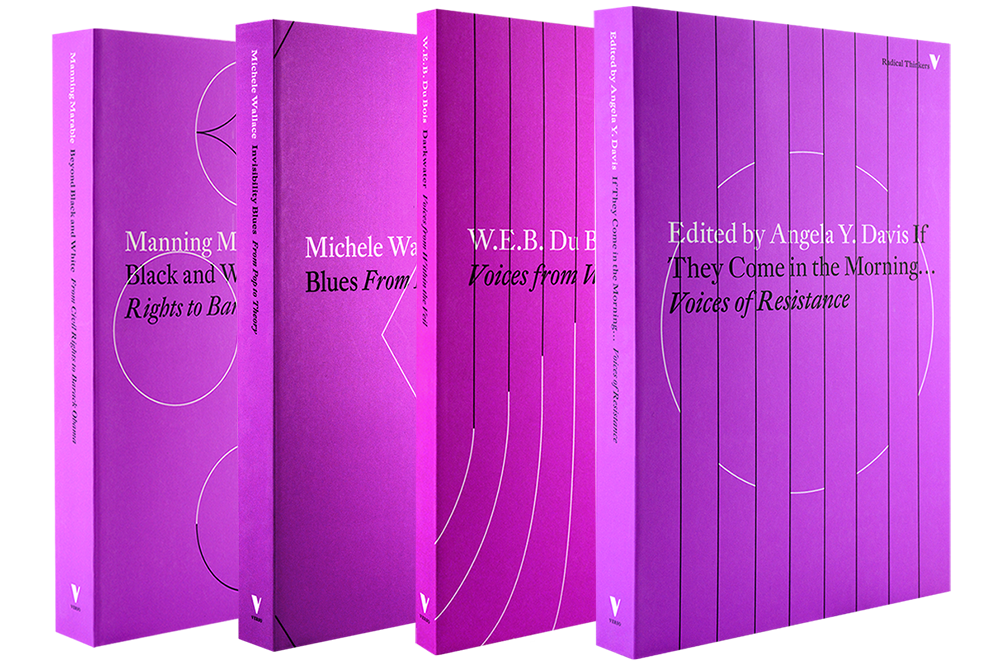 Darkwater: Voices from Within the Veil by WEB Du Bois

Invisibility Blues: From Pop to Theory by Michele Wallace

First published in 1990, Michele Wallace’s Invisibility Blues is widely regarded as a landmark in the history of black feminism. Wallace’s considerations of the black experience in America include recollections of her early life in Harlem; a look at the continued underrepresentation of black voices in politics, media, and culture; and the legacy of such figures as Zora Neale Hurston, Toni Cade Bambara, Toni Morrison,and Alice Walker. Wallace addresses the tensions between race, gender, and society, bringing them into the open with a singular mix of literary virtuosity and scholarly rigor. Invisibility Blues challenges and informs with the plain-spoken truth that has made it an acknowledged classic.

If They Come in the Morning … : Voices of Resistance by Angela Davis

With race and the police once more burning issues, this classic work from one of America’s giants of black radicalism has lost none of its prescience or power

The trial of Angela Davis is remembered as one of America’s most historic political trials, and no one can tell the story better than Davis herself. Opening with a letter from James Baldwin to Angela, and including contributions from numerous radicals and commentators such as Black Panthers George Jackson, Huey P. Newton, Bobby Seale and Erica Huggins, this book is not only an account of Davis’s incarceration and the struggles surrounding it, but also perhaps the most comprehensive and thorough analysis of the prison system of the United States and the figure embodied in Davis’s arrest and imprisonment—the political prisoner.

Since the book was written, the carceral system in the US has grown from strength to strength, with more of its black population behind bars than ever before. The scathing analysis of the role of prison and the policing of black populations offered by Davis and her comrades in this astonishing volume remains as relevant today as the day it was published.

Beyond Black and White: Transforming African-American Politics by Manning Marable

Highly acclaimed dissection of the “new racism,” from one of the greatest radical black intellectuals of our time

Many in the US, including Barack Obama, have called for a ‘post-racial’ politics: yet race still divides the country politically, economically and socially. In this highly acclaimed work, Manning Marable rejects both liberal inclusionist strategies and the separatist politics of the likes of Louis Farrakhan. Beginning by looking back at African-American politics and the fight against racism of the recent past, outlining a trenchant analysis of the ‘New Racial Domain’ that must be uprooted, he argues powerfully for a ‘transformationist’ strategy, which retains a distinctive black cultural identity but draws together all the poor and exploited in a united struggle against oppression.

Find more in the Radical Thinkers series, and read more on the blog.