To mark 10 years of Wikieaks we have 40% off the new paperback edition of The WikiLeaks Files: The World According to US Empire (published in collaboration with WikiLeaks and with an introduction by Julian Assange), with free shipping worldwide and bundled ebook, until Saturday October 8th.

See also our signed-copy giveaway at the bottom of this post.

Click here to buy The WikiLeaks Files for 40% off

WikiLeaks came to prominence in 2010 with the release of 251,287 top-secret State Department cables, which revealed to the world what the US government really thinks about national leaders, friendly dictators, and supposed allies. It brought to the surface the dark truths of crimes committed in our name: human rights violations, covert operations, and cover-ups.

The WikiLeaks Files exposes the machinations of the United States as it imposes a new form of imperialism on the world, one founded on tactics from torture to military action to trade deals, in the perpetual pursuit of expanding influence. The book also includes an introduction by Julian Assange examining the ongoing debates about freedom of information, international surveillance, and justice.

Here’s how to win:

50 winners will be picked at random from among those who retweet this tweet on October 5th and will win a signed copy of The WikiLeaks Files and the flash drive. 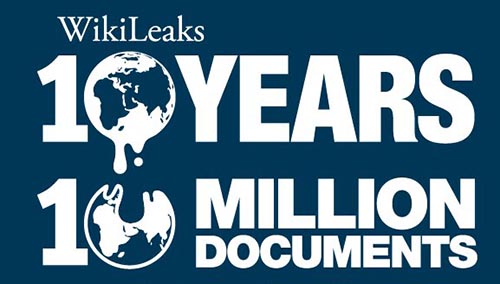 WikiLeaks’ 10th anniversary is an opportunity to reflect on the organisation’s impact.

While many of its releases have provided timely fuel for various campaigns, WikiLeaks has also made broader contributions, challenging how political, corporate and media elites operate, shaping how media and investigative journalism looks in the digital age, changing how governments conduct diplomacy and their compact with citizens, and also showing the negative impact of censorship and surveillance on geopolitical institutions and everyday life.

WikiLeaks has published 10 million documents in 10 years, an average of 3000 per day.

Each release has shared genuine official information about how governments, companies, banks, the UN, political parties, jailors, cults, private security firms, war planners and media actually operate when they think no one is looking.   It turns out that many institutions and professions have something to fear and hide about their illegal or immoral behaviour becoming public. For shining light onto wrongdoing and institutionalised failure, for insisting on maximum public access to supressed information, WikiLeaks has won many enemies across the political spectrum.