40% OFF ALL OUR BOOKS!
29 days left
Lily Dessau
comments

To Tell a Story: John Berger and Susan Sontag in Conversation

Landscapes, a collection of John Berger's essays on the relationship between art and politics edited by Tom Overton, is a companion to Portraits. This new book, published for Berger's 90th birthday, is an essential volume of diverse pieces – essays, short stories, and poems – all of which explore what art tells us about ourselves. We have 40% off ALL the books on our John Berger Bookshelf until November 6th.

To celebrate, here’s a video of John Berger exchanging ideas with Susan Sontag on the question of storytelling and the transforming role of the storyteller from the oral tradition to modern writing. 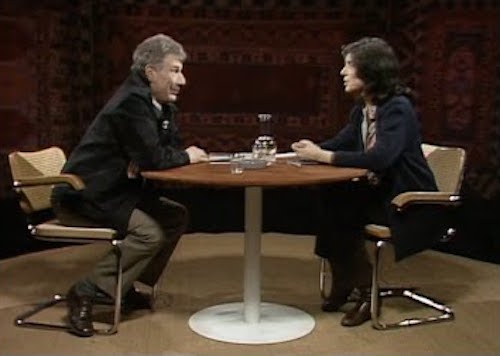 Berger and Sontag argue from opposing standpoints, Sontag considers the storyteller as inventor, in control of the material, out of which the ‘people come’. Berger conversely takes the form of the story as the result of the language coming out of the people – but he does characterize their differing views as arriving at the same place – the scene of the text.

For Berger, the story exists somewhere between fiction and truth. His characterization of the storyteller as the ‘secretary of death’ is echoed in his reading of Gabriel García Márquez’s Chronicle of a Death Foretold in chapter 10 of Landscapes. After Death hands the storyteller the file of an individual life, it is the storyteller who constructs ‘a story for the living’.

Berger considers the story and essay in one breath, both as a form of struggle to model the unsayable. But for Sontag the two are entirely separate, although the struggle persists in both. Landscapes presents the fluidity with which Berger moves from narrative into essay form. For him, the storyteller’s responsibility is to chronicle a life, and through this collection of prose pieces and poetry, we come to understand the storyteller and critic’s own life too.

This debate featured as an episode of Voices from 1983, a forum for debate about key issues in the arts and the life of the mind.

Read more:
A Gift for John Berger by Ali Smith
John Berger at 90: The Verso podcast in collaboration with the London Review Bookshop
Our John Berger competition (in conjunction with Zed Books and Penguin books)