Late last night, on the evening of Thursday, 20 October, police officers and sniffer dogs raided six massage parlours in Chinatown and Soho, when their cash registers were full with most of a day’s takings. Women in these presumed sex work premises were dragged out onto the streets past midnight, before 12 were detained and removed for immigration offences, with a further 6 arrests of maids and other staff members.

‘Operation Lanhydrock’ is reported to be a “proactive multi-agency” effort to tackle a long list of issues said to be plaguing the local community, including human trafficking, exploiting prostitution for gain, immigration offences, money laundering, and drug dealing. The Met has stated that the “aim of the operation is to identify, safeguard and remove victims of human trafficking, sexual exploitation and modern slavery offences”. But the Met (and the law) confuse the meanings of these terms. The person on the street would expect that a victim of these offences had been forced – yet the Modern Slavery Act of 2015 specifies that in the case of “trafficking”, for instance, “it is irrelevant whether the victim consents to the travel”. To be an undocumented migrant who sells sex is to be a victim under the law, irrespective of whether you see yourself that way.

The Evening Standard’s portrayal of the raids reinforces this obfuscation, saying that the women had been “rescued.” Yet history shows us that police raids, in targeting commercial sex venues, make women more vulnerable. I winced when I learned a 55-year-old woman was arrested last night for possession of a stun-gun (misleadingly described simply as a ‘firearm’ in this headline). This was probably kept for self-defense in the case of a robbery or assault. The safety of these workplaces can only have deteriorated since 2013, when Operation Companion provided violent clients with the leverage to abuse nervous workers.

The use of sniffer dogs highlights the absurdity of the Met’s claims to deploy their raids, in the middle of the night, for the protection of women. Can a sniffer dog tell us if a massage parlour is “utilising trafficked women”? Can a sniffer dog say if a sex worker is being paid fairly for work, in decent conditions? No. In fact, all a sniffer dog can do is to intimidate women and provide evidence for laying charges, which was, of course, the Met’s primary aim all along. The Met’s duplicity is evident even in their own press release, where comments about “justice” and “safety” appear in the same breath as talk of criminals being "caught and punished".

The police also saw fit to take away tens of thousands of pounds from workers at the end of a day of seeing clients. Sex Worker Advocacy and Resistance Movement (SWARM) commented that the stated aim of “bringing to justice those who seek to profit from the exploitation of vulnerable people” is “deeply ironic given that the police themselves have profited in this raid from their own exploitation of vulnerable people to the tune of £35,000. The criminalisation of both prostitution and migration is extremely profitable for the state.” The theft of wages straight off the back of a working day is an act of violence, and yet somehow justifiable when done under the guise of ‘saving’ us from greater harms.

If only an instrument as blunt as a midnight raid could address the problems of consent, labour rights and migration under globalised capitalism. But, as Chinatown’s migrant sex workers could tell you, these are incredibly complex issues. Academics, journalists and politicians alike consistently fail to establish coherent distinctions between undocumented migration, smuggling, kidnap, work, and abuse. They fall back on the simplistic playbook of carceral feminism, excusing themselves from the work of consulting sex workers about the conditions of their lives. 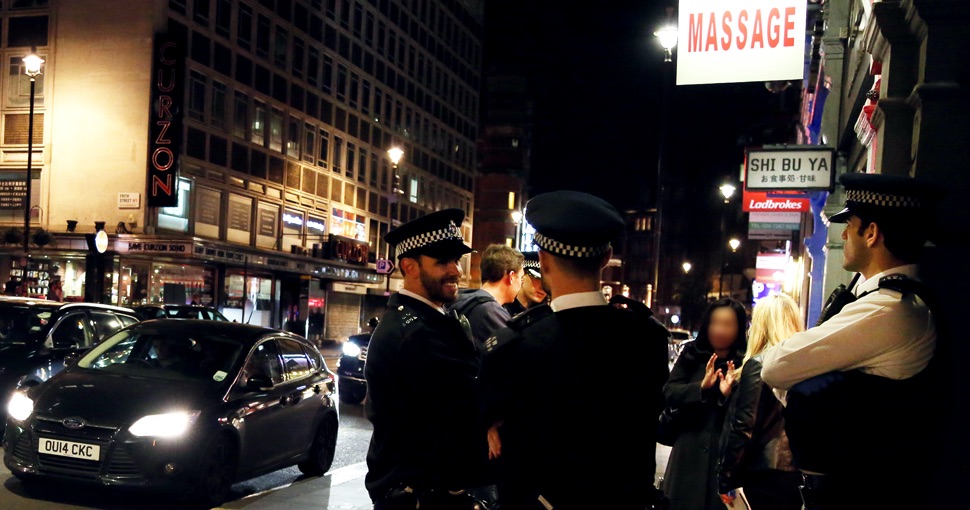 When I spoke to an officer at the scene last night in Chinatown about the treatment and welfare of the detainees, he assured me that there were female officers and social workers on hand to “address the issue of exploitation in a gentle way.” Suppose we assume that the police have the best of gentle intentions to address exploitation in a massage parlour. Then we must ask why this complicated issue is best addressed by uniformed police officers forcing women into vans in the small hours of the morning after kicking down the doors of their workplaces. The vulnerability of people selling sex comes specifically from their justified reluctance to ever contact the police for help. That migrant sex workers are easy targets for exploitation is inextricably bound up with their fear of law enforcement. One phone call for assistance could precipitate a raid, and a crappy job in sex work is, for many, better than no job at all. Many sex workers whose workplaces are criminalised are experiencing exploitation and are weighing up this conundrum every day.

I watched one woman being put into a van while the police blocked me from passing some useful phone numbers to her. Her colleagues watched in horror. Even if their working conditions were poor, they would never have called the police for fear of triggering exactly what happened last night. Even if their clients could be violent, they’d sooner look after themselves with stun-guns than invite police scrutiny. Anti-trafficking raids inflict violence on marginalised people like Chinatown sex workers. This morning some of them woke up in a cell. The rest are unemployed.

Ultimately, these raids are not about human rights at all, any more than those at Byron earlier in the year. Migrant sex workers will continue to suffer human rights abuses at the intersection of the criminalisation of migration and sex work, while the spectre of human trafficking provides a “swoop and rescue” fig leaf to cover the ugly reality of racist anti-migrant policies, social cleansing, and gentrification.

- Juno Mac is a sex worker and activist with the Sex Worker Advocacy and Resistance Movement (SWARM), a sex worker–led collective with branches in London, Leeds and Glasgow. She is the co-author, alongside Molly Smith, of Revolting Prostitutes: The Fight for Sex Workers' Rights.