Verso Guide to the 2016 Presidential Election

Hillary Clinton announced her candidacy for president on April 12, 2015, a mind-numbing 1 year, 6 months, and 26 days ago. The 2016 U.S. Presidential Election has been one of the longest, most polarized and grueling election cycles ever, culminating in a melodramatic spectacle between neoliberal establishment candidate Hillary Clinton and the sexist, racist, nativist faux populist Donald Trump—whose popularity coincides with the rise of the far right in Western Europe.

The election cycle has not been without hope, nor followed the script of typical US elections. Political polarization in the U.S. has resurrected the specter of dissent and left-wing insurgence, giving power to underdog candidates like Bernie Sanders, a self-defined democratic socialist who is currently the most popular politician in the U.S, and third-party candidate Jill Stein.

2016 has been a notable year for struggle and organizing within social movements, from the continued power of Black Lives Matter organizing and the Movement for Black Lives platform, to the successful Verizon strike, the Fight for 15 movement, the nationwide Prison Strike, and the ongoing Dakota Access Pipeline protests. We will need to continue all of this organizing to fight the incoming President, no matter who he or she is.

Here we collect the past year and a half of blog posts relating to the election. 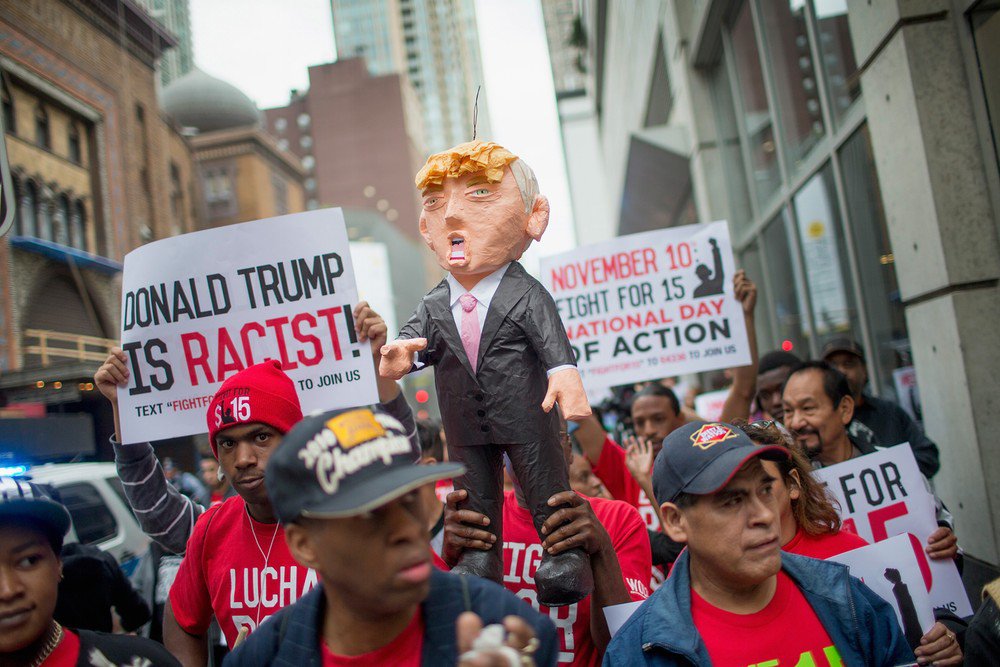 "As commander-in-chief, there’s no reason to believe [Clinton would] be any less a warhawk than she was as the senator who backed George W. Bush’s war in Iraq, or the Secretary of State who encouraged Barack Obama to escalate the war in Afghanistan."

"Her candidacy promulgates the fiction that America is always getting more progressive: We just had a black president and now we are getting a woman. A comforting story, but such stories not only mask the reality of neoliberalism, they also help to sustain it."

The Clintons’ War on Drugs: When Black Lives Didn’t Matter by Donna Murch

"With the Clintons at the helm of the 'New Democrats,' their strident anti-crime policies, like their assault on welfare, reflected a cynical attempt to win back centrist white voters, especially those from Dixie and the South Central United States."

Who Cares if Hillary is Warm? I Care About Her Wars by Laura Flanders

"Clinton’s coming on strong against the gun lobby and the NRA but US arms sales never did better than when she was Secretary of State. She approved what was at the time the largest ever US arms sale to scary Saudi Arabia, even as she acknowledged in Wiki-leaked cables, that that country was world’s leading source of support for Sunni terrorist groups."

"What’s important about the idea of socialist feminism is not necessarily what kind of socialism you have but the idea that the fate of women is deeply intertwined with the approach that we take to economic relations."

"The elections, Hillary Clinton wrote in her memoir of this time as secretary of state, 'would render the question of Zelaya moot.' (Belén Fernández, contributor to the forthcoming Verso book False Choices: The Faux Feminism of Hillary Clinton, has discovered that this passage has been removed from the paperback edition of Clinton’s book.)"

Barbara J. Fields: “We Left Democracy Behind a Long Time Ago”

“They (the white working population) don’t have a language for talking about why they are angry and why they feel aggrieved. What they have is a language of racism or a language of ‘let’s go after the Muslims’ or ‘immigrants have taken away our this, that, or the other,’ and that’s because they can’t frame it in terms of a class grievance to do with inequality. Because we don’t have that language available. And, for me, it’s heartening that Bernie Sanders is speaking that language. It does seem that there are white working people listening to it and responding to it, largely because they haven’t heard anybody else taking seriously the deterioration they notice in their own circumstances. To me, that is a favorable thing for black and white people.”

"The majority of Americans today are outsiders, especially in the halls of power where decisions about our economy are being made. And we will remain outsiders for as long as the political balance is tipped against the great mass of Americans, for as long as the status quo is characterized by inequality and injustice." -Bernie Sanders

"Sanders used every opportunity to link conditions and issues within Burlington to the national and international economic context, and to challenge Reaganism and imperialism in its every manifestation."

"An American id, Trump affirms the obscene impulses it's just too much effort to continue to repress."

"The voices of conscience in every sector of the opinion-making news media stand united this fall in their fear and loathing of Donald J. Trump, real estate mogul, reality TV star, Republican nominee for president of the United States."

"What Carson, Cruz, Trump are all doing is making explicit in their rhetoric what is already implicit in policy terms, right? So we already have a situation where, you know, every mosque in New York City has been under surveillance simply for being a mosque. We already deported thousands of people from the United States simply because they’re Muslim. We already have over a million people on terrorism watchlists, right? So, these kind of statements are—actually, what they’re doing is that they’re putting out in the open stuff that I think the people who see themselves as more mainstream would rather just keep quiet. And, you know, I think that the objection from people like Hillary Clinton to what Trump and Cruz and Carson are saying is, you know, of course we have a Muslim problem, but let’s just do this a little bit more quietly rather than making it so obvious. That’s his real sin, is to speak out."

Commentary from around the world

“The borders between politics and reality shows have shifted”: Franco Berardi on the US presidential race as reality show

"Trump and the growing forces of the European far right encourage a subjectivity related to a colonial and racial identity that is desperately resurfacing as a consequence of its own economic, demographic and geopolitical decline."

Chantal Mouffe and the Crisis of Liberal Democracy

"American politics might not be all that exceptional here. Many polities are experiencing something similar. Mainstream parties of center-right and center-left complexion find themselves challenged from the left and the right, sometimes by a left that is more clearly socialist and a right that is in direct and obvious continuity with fascist formations of the past. That version of liberalism often called neoliberalism finds itself under pressure from its old rivals, both of which can be seen in turn as competing versions of a democratic challenge."

Spanish-language and Latino Media and the US Election: How The News is Sold to Indignation Nation By Ed Morales

"But right now, US Latinxs have to deal with the reality that most of the media they’re getting, whether it’s in Spanish or English, is being produced by companies that are not owned by Latinxs or Latin Americans, is designed to reinforce brand loyalty, and that for the most part fails to inform them in ways that are similar to, if not worse than their mainstream counterparts."

"All my American friends are very happy about Bernie Sanders: after all, in the United States even to see someone vaguely talk about socialism is utterly extraordinary. But everyone knows that at some moment Bernie Sanders is going to have to say that you have to vote for Hillary Clinton. That’s the problem. And we are well aware that Hillary Clinton is an official, establishment figure."

A New Electorate: Mike Davis on Clinton, Trump, and Sanders

"Sanders, or rather his base, are the more novel and unexpected phenomena. As someone who was skeptical about the Occupy Movement (too dominated by elite kids and pseudo-anarchism), I find the current generational revolt astonishing in its scale, passion, and inclusivity."

Mondale’s central fallacy, however, was his erroneous belief that the further to the ideological right his campaign projected its image, the greater was his ability to undercut Reagan’s base, especially among white ethnic blue-collar voters and white-collar professionals. The reverse proved to be the case. Mondale probably lost a section of the Hart anti-war constituency by proposing a “military quarantine” against Nicaragua and by attacking Reagan’s failure to “retaliate against terrorists.” Mondale applauded the invasion of Grenada, reversing his previous position, and he promised that he would even be “tougher” in negotiations with the Soviets than Reagan. African-Americans were outraged that the Democratic candidate was virtually silent on the Reagan administration’s détente with apartheid. In short, Mondale took the black vote absolutely for granted, and devoted nearly his entire campaign to courting fractions of the white electorate which historically had voted for Republican presidential candidates.

I am not suggesting that the Populists have any realistic prospects of becoming a major electoral force. But I am claiming that Reaganism has permitted and encouraged the involvement of blatantly racist and anti-Semitic forces in the electoral arena to an unprecedented degree; that the ideological “glue” in the appeals of these formations to low- to middle-income whites is racism; and that the inevitable social by-product of the ultra-right’s mass political mobilization is terrorism and increased violence.

Despite the achievement of a new level of unity among black, progressive, and centrist political forces in combating apartheid and Reagan, larger questions remain unanswered regarding the future of the Democratic Party and the necessity to build a permanent coalition of social groups capable of defeating the right. The classical strategy of developing fascism is to splinter the working class, winning over the bulk of the disconnected lower petty bourgeoisie, then enact a series of authoritarian laws constricting bourgeois democratic liberties.

And again, The Clintons’ War on Drugs: When Black Lives Didn’t Matter by Donna Murch.