‘Inequality Is Literally Blocking Out the Sun’

In this excerpt from Vertical: The City from Satellites to Bunkers author Stephen Graham examines the new residential towers going up in Manhattan desgined to house the super-wealthy, and serve as a visible reminder of the extreme housing inequality in New York.

In this excerpt from Vertical: The City from Satellites to Bunkers author Stephen Graham looks at the new residential towers going up in Manhattan designed to house the super-wealthy, which serve as a visible reminder of the extreme housing inequality in New York.

Vertical, along with In Defense of Housing: The Politics of Crisis by David Madden and Peter Marcuse, are 40% off (with bundled ebook and free worldwide shipping) until Friday, November 25th. 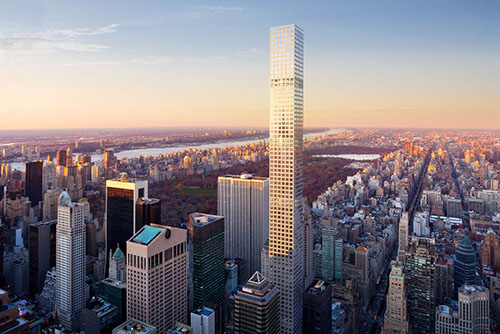 The recent rise of a forest of slender, supertall residential towers into the airy heights above midtown Manhattan presents more powerful evidence that building high does not necessarily enhance environmental sustainability or increase the supply of affordable housing. Designed by star architects like Frank Gehry, Richard Meier, Jacques Herzog, Jean Nouvel, or Robert Stern, these super-tall structures, which reach between 800 and 1,800 feet, now dominate skyscraper construction in New York. The construction of these towers represents the latest phenomenon in a thirty-year process of hyper-gentrification whereby the global super-rich – Malaysian financiers, Indian building moguls, Mexican power brokers, Russian ministers (some of dubious provenance) and the like – have used untraceable shell companies to aggressively assert increasing control in Manhattan.56 In 2016 the US state is so concerned about the role that Manhattan’s elite real estate is playing in the laundering of ‘dirty’ money from around the world that it started requiring real estate agents to track the identities of purchasers.57

Indeed, the towers are only the most visible sign of a much broader shift. This has involved the loosening of social obligations or regulations in housing and planning; the withdrawal of long-standing rent controls; the eviction of lower-income tenants; the privatisation of public space; aggressively race-based ‘zero tolerance’ policing and other social controls; and the deepening power of finance and real estate capital over urban planning. These forces have combined powerfully in the explicit repackaging of Manhattan as a luxury brand for the world’s super-rich, a process that has led directly to the rapid growth of New York’s increasingly dispersed homeless population (from 23,000 in 1993 to more than 60,000 in 2014). By 2014, a housing analyst calculated that ‘a minimum-wage earner would have to work 139 hours per week to be able to afford the average apartment’ in New York.58 At the same time, over $8 billion is spent each year in New York on residences that cost more than $5 million each.

And in 2013, Mayor Michael R. Bloomberg admitted that all this was the direct result of policy. ‘If we could get every billionaire around the world to move here’, he said. ‘It would be a godsend.’59 After a century and a half during which commercial skyscrapers drove the development of the world’s most famous urban skyline, the elite take-over of the urban skies means that Manhattan’s skyline is now being reshaped by eyrie-like refuges for the world’s superrich.

With the new towers crowding out the classic skyscraper icons of Midtown Manhattan such as the Empire State Building and the Chrysler Building, critics argue that street levels are being pushed into shadow while the classic iconography of Manhattan is being irreversibly changed.60

Referring to the long history of vertical segregation between servant classes and socio-economic elites in nineteenth-century London and Paris, the Guardian’s Fred Bernstein urges us to understand the new phenomenon of super-tall elite towers by thinking ‘of it as the new Upstairs, Downstairs, but on an urban scale.’ Housing towers for small numbers of wealthy occupants or investors require fewer elevators than corporate towers and so create more lettable space. The reorganisation of business practices to reduce corporate demands for central office space has also meant that elite residential demand has also become the most profitable to serve in many global cities. Developers in New York, as in other global cities, have thus started building towers exclusively to house the world’s tiny class of the itinerant uber-wealthy, people who ‘live in the Middle East or China or Latin America and travel between London and Shanghai and Sao Paulo and Moscow as if they were going from Brooklyn to Manhattan.’ Designed to access stunning views, especially in Midtown Manhattan and adjacent to Central Park, these towers are best understood, as Vanity Fair’s Paul Goldberger suggests, as places ‘not for full-time residents but for the top 1 per cent of the 1 per cent to touch down in when the mood strikes.’61

The best known of New York’s slender new towers is the eighty nine-floor tower at 432 Park Avenue. At 150 feet taller than the Empire State Building, 432 Park Avenue is the second highest tower in Manhattan and the highest residential block in the Western world.

Measured to roof height, it is actually the tallest building in Manhattan (until it is surpassed by the 1,770-foot Nordstrom tower under construction just next door).

Rather than the incorporating tightly packed and compact condos – the previous norm in Manhattan – the building elevates small numbers of residents within extraordinarily spacious and low-density living. Within its $95 million suites, which reach a height of up to 1,396 feet, the sensation is of flying in the sky, of soaring far above the streets and landmarks of Manhattan, with incredible views in all directions – from every room. ‘From the 90th floor, you feel as connected to the sky as to the ground’, Paul Golberger writes:

The city is laid out like a map, and the enormous windows are less like frames for the view than wide-open portals to it. And inside, the high ceilings and large rooms make the place feel even less like a conventional apartment. The layout leaves an open vista through the apartment, so you can see north to the Tappan Zee Bridge and south to the new 1 World Trade Center tower.62

Essentially, the building is a stack of 104 super-luxury apartments superimposed on each other within a tiny 96-foot-by-96-foot (30-metre-by-30-metre) floor plate. As with most of New York’s new super-tall and super-thin housing towers, each apartment – they range in price between $60 million and $95 million, or up to $11,500 per square foot – covers the entire floor-plate of the building. Each of the several bathrooms in the tower’s apartments is larger than the average Manhattan apartment. ‘Let’s stop this fantasy that building density and height are by their nature green’, architect Lloyd Alter stresses.

‘This stuff is some of the least dense housing that has ever been built in the city, inefficient tiny floor plates with single-family floor plans costing tens of millions of dollars.’63 Remarkably, 432 Park Avenue didn’t even need full planning permission from the city. As the municipality only limits the ratio of floor area to plot size and has no limits on height, the tower can effectively go as high as developers want once they purchase ‘air rights’ – the legal right to occupy high-up space – from adjacent occupiers. The only official permission required to build so high was that of the Federal Aviation Administration.64

Stephen Graham is Professor of Cities and Society at the Global Urban Research Unit, based in Newcastle University’s School of Architecture, Planning and Landscape. He is the author or editor of several books, including Telecommunications and the City and Splintering Urbanism (both with Simon Marvin), Cities, War and Terrorism, Disrupted Cities: When Infrastructures Fail, Cities Under Siege: The New Military Urbanism, and Vertical: The City from Satellites to Bunkers.

Vertical: The City from Satellites to Bunkers and In Defense of Housing: The Politics of Crisis are 40% off until Friday, November 25th at midnight UTC. Includes free shipping and free bundled ebook.