In Hurrah! Die Marmite ist Alle! Huw Lemmey looks back at 2016, blending memoir and polemic in a hybrid essay that sidesteps the boundaries of genre and received political wisdom. 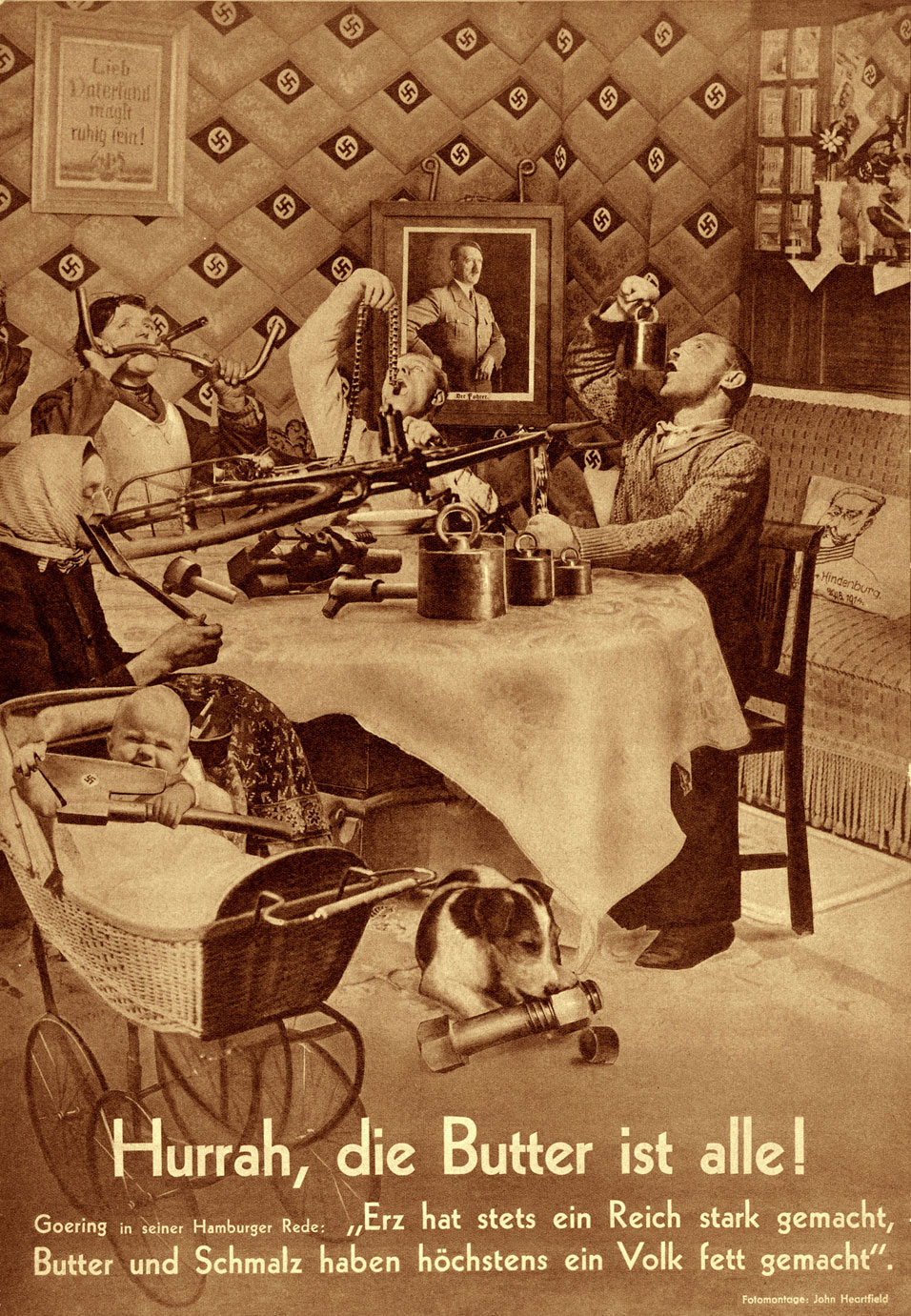 The roads are damp. The sodium bulbs in the street lamps, which used to drop pools of rich orange light, have been replaced by LED bulbs. Any street that has had “the switch” now looks like a scene from The Third Man. These brighter, whiter lights throw darker shadows. Every figure walking past me, hunched against the ice air, could be a black marketeer for nylons, chocolate, adulterated penicillin. In every conversation I keep reaching for these mid-century allusions.

I think about how these boroughs have been painted in the public image this year. How columnists and politicians have represented these metropolitan elitist enclaves. The trendy falafel bars staffed by old and new immigrants. The hanging-on-by-your-fingertips poverty a street away from the basement excavation. It's hard to find an easy metaphor for 2016, short of the smear of dog shite I'm wiping off my shoe onto the protruding cobblestone. The worst year ever.

A cold-blooded murder by a slogan-screaming fascist just days before the referendum is one thing. The rise in assaults reported by people of colour, Eastern European migrants, and queers is another. The firebombing. The uncertainty of millions of EU migrants, a collapsing pound, soaring cost of living, a rejoicing far-right, a looming spectre of violence and economic catastrophe – it’s neither here nor there, to be honest. But a Marmite shortage? That’s when the Real British begin to worry about the dark future of Europe.

Mid-October, four months after the vote to leave the European Union had smashed open the political and media system. Following the vote, the British Pound collapsed, casting all the sureties off the table and scattering them across the floor. Discrepancies between currencies caused multinationals to alleviate the hit of a 17% fall in the value of sterling. The international food giant Unilever hiked prices on its popular branded goods to make up the shortfall in the exchange rate, and the supermarket giant Tesco stopped deliveries in an attempt to stop the price rise. Within hours the shelves of the condiment aisles had been cleared of yeast extract; rumours about a long-term drought began to spread on social networks. Panic-buying is the canary in the coal mine, the only accurate polling of public opinion left. We see it portrayed either in the news, as an act of mass-hysteria from an underprepared, over-excited public, or on the cinema screen, as the portentous moment when trust in the government has broken down and the apocalypse proper has begun.

It’s a symbolic moment of breakdown; when the supply cannot match the demand, when the supply chains have run dry, when it’s time you questioned what you have done to protect your family unit. For the British, that moment is not when you run out of wheat, water or rice. It’s Marmite, because Marmite is, at its core, congealed ideology. It’s Britain in a paste; nostalgic and unchanging, priding itself on a studied and mannered eccentricity. The unusual by-product of alcohol. Brits take its abberancy as a badge of honour, importing it illictly in hold luggage or paying through the nose for it in ex-pat (not immigrant) stores, never once questioning why foreigners don’t eat it. Invented by a German, with a French name, it’s regarded, in that dread phrase, as “quintessentially British”. It’s hypocrisy in a jar – our national vice. It markets itself like that. You either love it, or you hate it.

I’ve spooked myself this year. Each new election, I’d wake up and look out over the tree line, into the rooftops, and try to come to grips with the worst happening. I noticed I got stomach pains every time I watched the news, and I stopped watching when I found myself in hospital. “There’s nothing wrong with you,” the young consultant said, as I clutched and clawed myself. “You’ve just got to de-stress.” I asked him for suggestions. I don’t know whether thinking about what might very possibly happen, or what is certainly capable of happening, is just preparing myself, or causing unnecessary panic.

Realness was served in 2016. For queers on the ball scene, Realness was always confection; to pass as straight, rich, successful. Dorian Corey said: “You're not really an executive, but you're looking like an executive. And therefore, you're showing the straight world that, ‘I can be an executive. If I had the opportunity, I can be one. Because I can look it.’” It acknowledged the constructed nature of mainstream identities, and necessity was the drag mother of invention.

This year Real Realness came back. Real British people had Real concerns over immigration. The rest of us remain Unreal. Owen Smith was a Real Man. Here he is not knowing what a cappuccino is, like a real person. Here he is with his Real wife, who isn’t a lesbian wife. McDonalds, falafel, croissants; the list of Real and Unreal foods, tastes, opinions grew larger with every new speech and opinion piece.

I was not one of the Real Brits. “This cannot be real”, I found myself saying to myself again and again.

In the end Real people, unshifting, monocultural and monotasteful, became the lodestone of politics. Through sifting the tea leaves (more Real than Unreal coffee grounds, which are alienating, metropolitan, patronising), through a careful process of political divination, we might be able to find the source of the Real, the person who matters, sat quietly between the White Working Class, the Hard-Working Family and the Floating Voter. If only we could find them, we could craft the perfect politics.

For some reason, the job of reflecting back what this year really means falls upon the very same journalists and commentators who failed to “reflect the mood” and predict the crisis in the first place.: “If I didn’t have to in my previous 30 years of writing about popular opinion, I don’t see why I have to now – but nonetheless I’ve done some soul-searching in the 24 hours between the vote and the time I have to file this column and it’s clear to me that this Generation Snowflake of entitled millenials and minorities have pushed too far and that’s what has caused this crisis, certainly not the years of deindustrialisation and economic decline in favour of non-unionised precarious employment which I advocated for and which is still a good idea.”

I poured milk into my coffee and stared out of the kitchen window this morning. Two great tits jumped across the branch of the fig tree in the yard below. The year thrashes itself to an end. In the northern hemisphere, the bones of the trees look brittle enough to break; like me, riddled with nerve damage. Scars over traumas never grow back the same way.

The conversations with friends seem, in the dying days of the year, to have taken on a new frankness and a new nuance. Let’s cut the crap, get down to brass tacks. Let’s establish which mutual fictions we both reject, which heresies we hold in common, what we still need to thrash out and which are too sustaining to abandon. When you look online, the opinion makers and politicians seem far away. People who never really had much time for reproductive rights, racial equality, the right of trans people to simply exist as they are, etc – now they have a reason to “push back”. “You” are the reason “we” lost.

We’ve been digging up metaphors from the last time this happened. An Angel of History, Janus-faced, forwards and backwards. That seems to describe it. Or maybe an old world dying, a new world yet to be born, and many malignancies. First as tragedy, then as farce. But right now History does not feel like a circle repeating its hammy theatrics – tragedy, farce, tragedy, farce – but a spiral, tightening with each turn, an ever-decreasing helix, faster and faster. It’s hard to spot where one ends and the next begins. And with each turn, the violence seems to get closer and closer.

Perhaps Marmite is the metaphor to reach for. The year is thick, opaque, the taste salty to the tongue. And, whilst this year has been filled with hate aimed at many us, some people like that very, very much. There might be a panic but there’s going to be no shortage next year.

Around the kitchen table, Mummy, Daddy and the kids sit down for dinner. There is nothing to spread on their toast. The stockpot is empty. Only browns smears remain. Instead, Father serves up lashings of British exports. Grandma gorges herself on the financial services industry. The sticky-faced little lad smears English Tea (product of India) and raspberry jam across his face. Dad’s forcing a heavy serving of guns and missiles down his throat. Mama chows down on self-delusion. Framed on the wall, Her Majesty the Queen watches, smiling and heavy-lidded, waiting for that warm embrace, as the baby in the pram crunches a bumbling Foreign Secretary with black eyeballs, clapping its tiny hands together in joyful applause as the mop-haired tosser spits racist slurs from his lips. Everyone applauds. Underneath the table reads a slogan: “Hurrah! Die Marmite is Alle!”.

I won’t argue that it is all in disarray. I visited the printers first thing, to check on page proofs of a forthcoming book. The large sheets, before they are folded, bound and trimmed, contain sixteen pages of text. The nature of how they are folded (back on themselves) and collated (in strict order) means, on the untrimmed, uncut sheets, they read out of sync, upside down, scattered. I’ve read the text through myself, edited it, but shuffled up I can’t make head nor tail of it. There is no narrative. Instead it’s just clippings of magic and conflict; a set of tarot cards, the phrase “Golden Dawn” (fascists or mystics, it’s not clear), counting out euros into your hand, men, women and children defending Taksim Gezi Park, the clash of students running shoulder-first in a wall of clattering plastic riot shields.

As we run the first copies through the printing press, the designer who accompanied me explained why we were printing this black and white book using a full-colour, CMYK printing process. “If you print using just the black ink on white paper – the ‘K’ in CYMK – it can appear grey, washed out. Even the darkest areas become dusty. But if you print images in full-colour, and if you line everything up properly, the black looks very black and the white seems very white.”