How Would a Eurozone Break-Up Affect Balance Sheets?

First published on the blog of the Centre de recherche en Économie at Sciences Po. Translated by David Broder.

Upon its introduction at the turn of the millennium, the euro was widely perceived as a major achievement for Europe. Its apparent economic success, combined with the convergence of multiple economic indicators across the various countries, fed this feeling of success. A few years later, the picture looks radically different. The global financial crisis has revealed the imbalances that led to the sovereign debt crisis and which have driven the Eurozone to the brink of breaking apart. The austerity policies that became a continent-wide norm in 2011 have fuelled a long stagnation [See the reports of the independent Annual Growth Survey (iAGS)], with growth rates paling in comparison to those of the United States and the United Kingdom.

This economic under-performance has fed popular resentment against the euro, with a growing number of Europeans today considering it the problem rather than the solution. The financial community itself seems to be preparing for the possibility of leaving or dissolving the single currency, by reducing its cross-border exposure. Greece came close to breaking away in 2015. Finally, the intellectual atmosphere has also changed: leading thinkers like the American economist Joseph Stiglitz and the German sociologist Wolfgang Streeck are but the most visible representatives of a more generalised change in attitudes.

It has thus become concretely possible that a country will leave the Eurozone, or even that the single currency will be dissolved. Such an event would obviously have a major effect at multiple levels. At the economic level, the most evident consequence would concern markets for products, on account of the new exchange rates: uncertainty would without doubt reign in the short term, but in the longer term the possibility of adjusting nominal parity would contribute to the resorption of current account imbalances.

Yet there also exists another impact: a less-widely discussed one, but which potentially has more disruptive consequences. Namely, the changes to economic actors’ balance-sheets resulting from the process of currency redenomination. This process could introduce major imbalances to the balance between assets and liabilities. It is crucially important that we evaluate these balance-sheet effects, since they could affect financial relations, investment and trade; have unexpected redistributive effects; and, if not handled appropriately, lead to disruption in the sphere of production.

The concrete questions we pose are the following. If a country leaves the Eurozone and depreciates its new national currency, what will the consequences be for domestic economic agents who have their liabilities denominated in euros: will they be able to pay them off in the new national currency? If not, will they be able to avoid bankruptcy even despite the increase in their debts? Conversely, what will the consequences be for leaver countries whose new currency appreciates, and who have built up foreign assets?

In a recent study we put forward an evaluation of this redenomination risk in the Eurozone, regarding each country and its main institutional sectors. We set out two scenarios: that of a single country leaving, and that of the Eurozone breaking up completely.

Our analysis is grounded in the concept of "relevant" assets and liabilities. These are the balance-sheet items that will not be redenominated in the new currency after euro-exit, for juridical or economic reasons. In practice, the most important factor in determining what debts or assets are "relevant" is what law is applicable to them: if a financial contract is governed by domestic law, then very probably the leaver country can redenominate it in the new currency simply by voting a bill through parliament. Conversely, contracts in foreign law (generally in English or New York law) will still be in euros, or else redenominated in some other currency if the euro were to disappear. In the first case, it is the lender who bears the economic cost; in the second, the risk has to be borne by the borrower, whose weight of debt is increased, unless they decide to default and thus to impose losses on the lender.

Let’s begin by looking at liabilities. Table 1 presents our estimates of relevant debt by country and institutional sector. This table thus gives an estimate of different countries’ and sectors’ exposure to euro exit followed by depreciation. To the extent that the first months after a euro exit would be the most critical, and potentially marked by an over-adjustment of exchange rates, we have also indicated the short-term component of relevant debt.

When it comes to public debt, the countries most under threat are Greece and Portugal, because they have major foreign loans that they will have to pay back in euros. Conversely, France and Italy are not exposed in terms of their public debt, because it is almost entirely governed by domestic law and thus could easily be redenominated in francs or lira. The financial sector is more exposed, and in particular in the countries that act as financial intermediaries such as Luxembourg, the Netherlands and Ireland. The non-financial private sector’s exposure seems much more restricted (on account of certain limitations of our data, the figures are overestimated in countries endowed with a very developed non-banking financial system).

Nonetheless, relevant liabilities are not the only thing at stake. Relevant assets are equally important: for countries that would have to undergo depreciation (which typically means southern European countries, including France) these assets would help attenuate the debt problem, because currency holdings would be re-valued in the national currency; conversely, if the currency appreciated (typically concerning the northern European countries) then these difficulties would come on the assets-side of the balance sheet.

The graph below shows our estimates for "net relevant positions," namely the difference between relevant assets and liabilities. A positive number means that depreciation would improve the balance-sheet, whereas appreciation would weaken it. 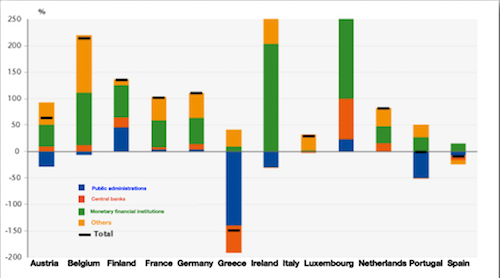 From this it is strikingly clear that for most countries and sectors the net relevant position is positive. This means that the northern European countries risk major losses in their foreign holdings if they quit the monetary union. Conversely, for the southern countries and France there is no balance-sheet risk for the private sector taken as a whole (except in Spain), and in certain cases not even for the public sector. That does not mean that there would be no problems: at the microeconomic level, those who hold relevant assets may not be the same as those who hold relevant liabilities. But at least there are margins of manoeuvre.

In order to paint a more global picture taking account of the fact that assets can attenuate problems on the liabilities side of things — but only to a certain extent — and that short-term debt is the most critical question, we have constructed a composite risk index providing a synthesis of all these parameters. This is shown by table 2. This indicator has been constructed on the basis of estimates for expected exchange rate variations after euro exit.

While this exercise necessarily involves choosing arbitrary thresholds, it helps us to identify some specific vulnerabilities: the public debts of Greece and Portugal, for which the probable result would be substantial restructuring or even default; Greece, Ireland, Luxemburg and possibly Finland’s financial sectors, which would have to undergo deep restructuring; and potentially the non-financial sectors of Ireland and Luxembourg, although this latter result may well be an artefact of the limitations to our data.

The general conclusion we can draw from our analysis is that even if the problem for balance-sheets is a real one, and a problem which must be taken seriously, overall it is not so large in scale as some claim. In particular, in the non-financial private sector this problem should be a manageable one, one condition that the appropriate policies are implemented. This should limit the resulting disruption.

Evaluating the costs of euro exit is evidently important for managing this event correctly ex post, if it does become a concrete reality on account of some unexpected political or economic shock. But this evaluation is also interesting ex ante, and in particular for a country that is thinking about leaving or staying. In this regard our analysis arrives at a somewhat unexpected conclusion: the costs will probably not be as high for certain deficit countries (Italy, Spain), while they will be higher than is usually thought for countries in surplus, who could suffer capital losses through depreciation or default. Grasping this fact should strengthen the southern countries’ negotiating power in their negotiations with the northern countries over the Eurozone’s future.