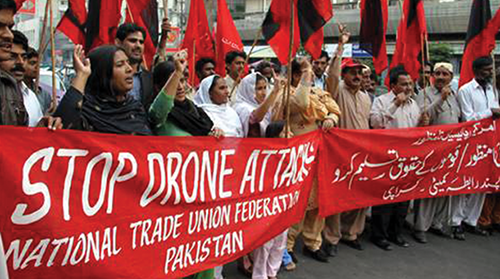 Obama had a dismal record of expanding the US drone program and killing civilians in the name of US security. His expansion of executive power to authorize drone attacks around the world has set a dangerous precedent for Trump to continue the US policy of war from above, in which innocent civilians are seen as collateral damage. The defense budget of the US ($622 billion spent on the military in 2016) accounts for almost 40 percent of the global total.

From Trump’s further militarization of our borders, trying to build a wall between the US and Mexico, banning people from seven predominantly Muslim countries from entering the US, and increasing funding to militarize local police departments, now more than ever the administration’s embrace of military tactics at home and abroad must be resisted.

Start by learning about the history of US imperialism and militarization with 40% off all books on the Militarization of Everything Reading List, with bundled ebooks where available and free shipping worldwide. 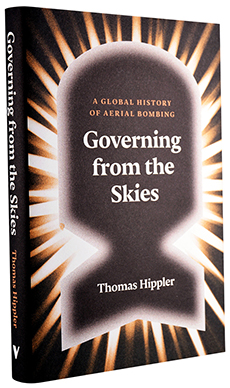 Governing from the Skies: A Global History of Aerial Bombing
by Thomas Hippler
Translated by David Fernbach

In this short and fascinating history of aerial warfare, Thomas Hippler brings together all the major themes of the past century: nationalism, democracy, totalitarianism, colonialism, globalization, the welfare state and its decline, and the rise of neoliberalism. Air power is the defining characteristic of modern warfare; as Hippler demonstrates, it is also ingrained in the nature of modern politics.

“Hippler develops a political philosophy of war around this topical question: how can one understand ‘the extension of colonial practices to the world population as a whole’?” – Le Monde 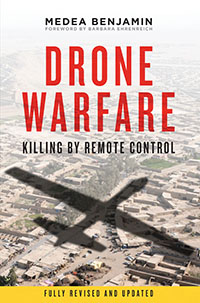 Drone Warfare is the first comprehensive analysis of one of the fastest growing—and most secretive—fronts in global conflict: the rise of robot warfare. In 2000, the Pentagon had fewer than fifty aerial drones; ten years later, it had a fleet of nearly 7,500, and the US Air Force now trains more drone “pilots” than bomber and fighter pilots combined. In vivid, readable style, this book looks at what activists, lawyers, and scientists across the globe are doing to ground these weapons. CODEPINK and Global Exchange cofounder Medea Benjamin argues that the assassinations we are carrying out from the air will come back to haunt us when others start doing the same thing—to us.

“Thoroughly researched, hard-hitting … so very timely, and so very much needed.”—Tikkun 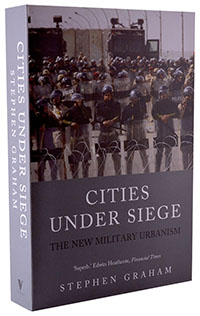 Cities Under Siege: The New Military Urbanism
by Stephen Graham

Cities are the new battleground of our increasingly urban world. From the slums of the global South to the wealthy financial centers of the West, Cities Under Siege traces the spread of political violence through the sites, spaces, infrastructure and symbols of the world’s rapidly expanding metropolitan areas. Drawing on a wealth of original research, Stephen Graham shows how Western militaries and security forces now perceive all urban terrain as a conflict zone. He looks at the militarization and surveillance of international borders, the use of ‘security’ concerns to suppress democratic dissent, and the enacting of legislation to suspend civilian law.

“Superb ... Graham builds on the writings of Mike Davis and Naomi Klein who have attempted to expose the hidden corporate and military structures behind everyday life.” – Financial Times 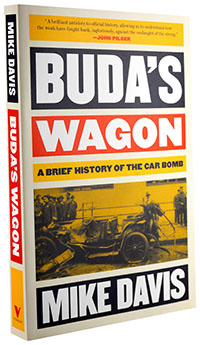 Buda’s Wagon: A Brief History of the Car Bomb
by Mike Davis

On a September day in 1920, an angry Italian anarchist named Mario Buda exploded a horse-drawn wagon filled with dynamite and iron scrap near New York’s Wall Street, killing 40 people. Since Buda’s prototype the car bomb has evolved into a “poor man’s air force,” a generic weapon of mass destruction that now craters cities from Bombay to Oklahoma City. In this provocative history, Mike Davis traces the its worldwide use and development, in the process exposing the role of state intelligence agencies—particularly those of the United States, Israel, India, and Pakistan—in globalizing urban terrorist techniques.

Mike Davis follows the evolution of the car bomb from the Balkans to Palestine, Vietnam, Northern Ireland, Lebanon and, of course, Iraq.” – New York Times 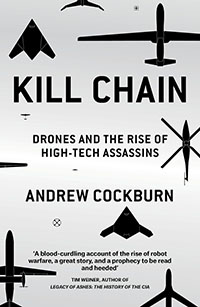 Kill Chain: Drones and the Rise of High-Tech Assassins (UK only)
by Andrew Cockburn

The essential history of drone warfare, a development in military technology that, as Andrew Cockburn demonstrates, has its origins in long-buried secret programmes dating to US military interventions in Vietnam and Yugoslavia. Cockburn follows the links in a chain that stretches from the White House, through the drone command center in Nevada, to the skies of Helmand Province. The book uncovers the technological breakthroughs, the revolution in military philosophy, and the devastating collateral damage resulting from assassinations allegedly targeted with pinpoint precision.

“Sharp-eyed and disturbing, especially Cockburn’s concluding assessment that, nourished by an unending flow of money, ‘the assassination machine is here to stay.’” – Kirkus 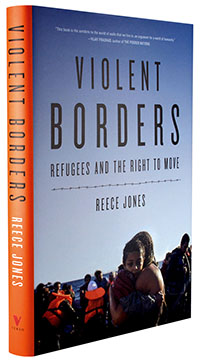 Forty thousand people died trying to cross international borders in the past decade, with the high-profile deaths along the shores of Europe only accounting for half of the grisly total. Reece Jones argues that these deaths are not exceptional, but rather the result of state attempts to contain populations and control access to resources and opportunities. Jones crosses the migrant trails of the world, documenting the billions of dollars spent on border security projects and their dire consequences for countless millions.

“Borders, Jones convincingly argues, are a means of inflicting violence on poor people. This is an engaging and lucid analysis of a much misunderstood issue.” –Arun Kundnani, author of The Muslims Are Coming: Islamophobia, Extremism, and the Domestic War on Terror 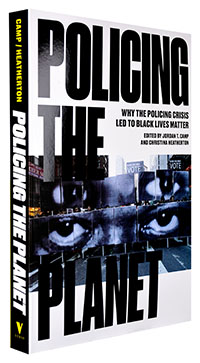 Policing the Planet: Why the Policing Crisis Led to Black Lives Matter
Edited by Jordan T. Camp and Christina Heatherton

Combining firsthand accounts from activists with the research of scholars and reflections from artists, Policing the Planet traces the global spread of the broken-windows policing strategy, a doctrine that has vastly broadened police power the world over—to deadly effect.

“A brilliant and provocative collection of voices that compels us to see the Black Lives Matter Movement in the larger context of twenty-first-century racial capitalism and the growing carceral state.” –Barbara Ransby, author of Ella Baker and the Black Freedom Movement 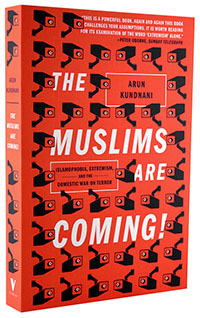 The Muslims Are Coming!: Islamophobia, Extremism, and the Domestic War on Terror
by Arun Kundnani

The new front in the War on Terror is the “homegrown enemy,” domestic terrorists who have become the focus of sprawling counterterrorism structures of policing and surveillance in the United States and across Europe. Domestic surveillance has mushroomed – at least 100,000 Muslims in America have been secretly under scrutiny.

Based on several years of research and reportage, in locations as disparate as Texas, New York and Yorkshire, and written in engrossing, precise prose, this is the first comprehensive critique of counter radicalization strategies.

“Kundnani gives eloquent voice to the communities that have been regulated, watched, and silenced by the national security state.” –David Cole, author of Enemy Aliens: Double Standards and Constitutional Freedoms in the War on Terrorism 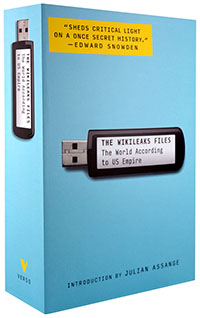 The WikiLeaks Files: The World According to US Empire
Introduction by Julian Assange
Published in collaboration with WikiLeaks

WikiLeaks came to prominence in 2010 with the release of 251,287 top-secret State Department cables, which revealed to the world what the US government really thinks about national leaders, friendly dictators, and supposed allies. The WikiLeaks Files exposes the machinations of the United States as it imposes a new form of imperialism on the world, one founded on tactics from torture to military action, to trade deals and “soft power,” in the perpetual pursuit of expanding influence.

“Long after the debate over the publication of these cables has been forgotten, the documents themselves will remain a valuable archive for scholars and students of US foreign policy. The essays that make up The WikiLeaks Files shed critical light on a once secret history.” – Edward J. Snowden 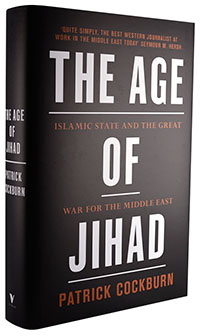 Charts the turmoil of today’s Middle East and the devastating role the West has played in the region from 2001 to the present. Beginning with the US-led invasion of Afghanistan, Cockburn explores the vast geopolitical struggle that is the Sunni–Shia conflict, a clash that shapes the war on terror, western military interventions, the evolution of the insurgency, the civil wars in Yemen, Libya and Syria, the Arab Spring, the fall of regional dictators, and the rise of Islamic State. Cockburn’s originality and breadth of vision make The Age of Jihad the most in-depth analysis of the regional crisis in the Middle East to date.

“Quite simply, the best Western journalist at work in the Middle East today.” –Seymour M. Hersh 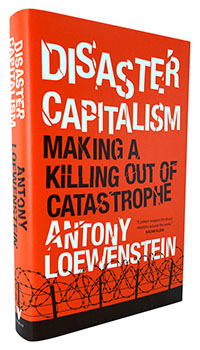 Disaster Capitalism: Making a Killing Out of Catastrophe
by Antony Loewenstein

“A journey into a world of mutated economics and corrupt politics that we ignore at our peril.” –John Pilger 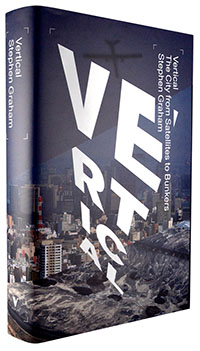 Vertical: The City from Satellites to Bunkers
by Stephen Graham

Today we live in a world that can no longer be read as a two-dimensional map, but must now be understood as a series of vertical strata that reach from the satellites that encircle our planet to the tunnels deep within the ground. Starting at the edge of earth’s atmosphere and, in a series of riveting studies, descending through each layer, Graham explores the world of drones, the city from the viewpoint of an aerial bomber, the design of sidewalks and the hidden depths of underground bunkers.

“Roll over Jane Jacobs: here’s urban geography as it looks like through the eye of a Predator at 25,000 feet. A fundamental and very scary report from the global red zone.” –Mike Davis, author of Planet of Slums 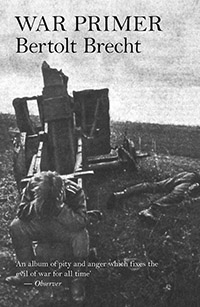 In this singular book written during World War Two, Bertolt Brecht presents a devastating visual and lyrical attack on war under modern capitalism. He takes photographs from newspapers and popular magazines, and adds short lapidary verses to each in a unique attempt to understand the truth of war using mass media. The result is an outstanding literary memorial to World War Two and one of the most spontaneous, revealing and moving of Brecht’s works.

Governing from the Skies
by Thomas Hippler