What tomorrow will be… 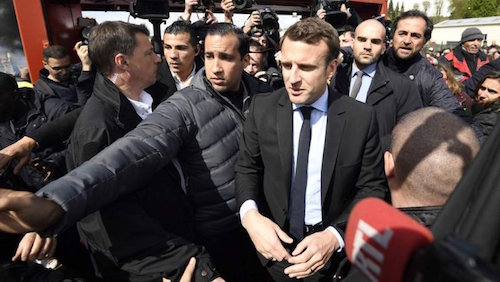 "What tomorrow will be…" — here I am re-using a title of Derrida’s, in turn borrowed from Victor Hugo.1 This is very apt indeed as a reference to something that is troubling a lot of voters on the more or less radical Left, as they face up to their "electoral duty" in the second round of the presidential election. I do not claim to be getting rid of the uncertainties now clogging up our horizon. But I do want to try to circumscribe and name them, which is in our common interest.

We know what we are going to vote against, why we are doing so and how to do it. There is no prevarication, here: we will be choosing Marine Le Pen’s adversary, who has a name on the ballot, which is Emmanuel Macron.

What is at issue is not only the Front National’s loathsome programme, but so, too the effects of the arrival in power — or even close to power — of a neo-fascist party that emerged from French Algeria and the OAS [Secret Army Organisation, far-right paramilitary body during the Algerian War], a party based on attacking immigration and designating an enemy within. That would mean a wave of racist, Islamophobic, and xenophobic attacks, like England after Brexit but to the power of ten. It would mean a collapse of republican values and of personal safety. So it is not enough for Le Pen to lose the election; she has to suffer a heavy defeat. It is not obvious that this will happen.

It is also important to know who we will be voting for. He is an ambitious and intelligent but minoritarian technocrat, the partisan of neoliberalism and the "modernisation" of French society within a European framework, put into orbit by a network of financiers and top civil servants, supported by a generation of young disciples of the "third way," and who has clearly spoken out on the crimes of colonisation. But above all, to know for what future consequences we are voting: how will our vote affect the situation that the first round itself just revealed? Here I am not talking about the "third round" or the future majority [i.e. after June’s parliamentary elections], but the very state of politics in France. Here I will settle for posing two problems.

Our political system is in an institutional crisis, with no possibility of its being restored. As elsewhere — though with its own particular traits — it has become impossible to govern by the "normal" channels, which used to include the exchange of power [alternance] between centre-Right and centre-Left parties. The fact that the real policies they each practiced were increasingly indistinguishable is one symptom of this crisis, largely responsible for the delegitimisation affecting the "party form." But it is also one of the effects of this delegitimisation. At one time himself a student of the Hegelian dialectic, Emmanuel Macron is trying to transform the negation into an affirmation through the synthesis of opposites. Faced with the "neither Right nor Left" of the fascist tradition, he proposes "both Right and Left at the same time." That could only work if he had the means to appear as a man of providence standing above social forces. Since that is not the case, and will never be the case, the crisis will go on deepening, putting the solidity of democratic ideals in peril.

Thus it is up to us to invent institutions and formations that are not less but more representative, and more sincere in expressing the real conflicts, giving citizens back the power to influence governmental choices. Popular and not populist in essence, this work site — which certain recent movements have prepared the ground for, including during the campaign — must constantly remain open during the dangerous period which we will now be going through.

This is inseparable from the work site where "social divisions" are defined. All sorts of formulations are circulating telling us that new social, cultural, territorial, occupational and generational cleavages have taken over from the antagonism between "Right" and "Left." This is not wrong, at least if we refer to conventional definitions. But the translation of these cleavages into ideological alternatives, like "nationalism versus globalism" or "open against closed" does a lot to mystify things! What is true is that on the one hand inequalities are dramatically worsening, and on the other hand new antagonisms produced by globalisation are emerging among the poor, or the non-rich, and more generally among workers, service users, state employees, students, and all those subjected to the logics of financial profitability. That does not make the class struggle disappear, but it has a singular role in obscuring its true stakes, and above all impedes its crystallisation into political movements — a crystallisation which has, in any case, never come out of nowhere.

It will take a lot of reflection and confrontations to exorcise the violence carried within these "contradictions within the people," in order to bring out perspectives for the future. But most of all we have to push with all our strength for different economic policies: not in the form of wild deregulation and restrictions on labour rights, or, conversely, protectionism and hardening borders, but — as the economist Pierre-Noël Giraud suggests — neo-mercantilist policies that redistribute investment among nomadic and settled workers (which is not at all the same thing as choosing between "national labour" and immigrants) and the energy transition. Yet for reasons of both solidarity and effectiveness, these policies only make sense at the European level — on condition, of course, that Europe reverse the course that it has taken since it adopted the dogma of "free and untrammelled competition," and its correlates in terms of budget austerity and the immunity of the banks.

That is why it is regrettable that in the current campaign the debate on the European implications of French politics has been limited to crude antitheses, or formal considerations on the Eurozone, instead of confronting the question of power relations in the European space — which is itself in a full-blown systemic crisis — and its future.

There will be no "another France" without another Europe. Macron’s election is not itself a sufficient condition for these problems to become the terrain for collective engagement. However, Le Pen’s victory is a sure recipe for them constantly being diverted away from their real meaning. Let’s not make a tabula rasa of the past, but instead draw all its lessons. The election is but a single moment; but given what it reveals, the fears it raises, what it can awaken, it is also a moment that we cannot circumvent. It is up to us to traverse this moment in a useful way, eyes wide open.

1. "What tomorrow will be, no one knows": from Victor Hugo’s 1835 poem Napoléon II (les Chants du crépuscule)