40% off EVERYTHING!
about 1 month left
Nawal Kumari Arjini
comments

"I grew up dreaming of Beit Jibrin as a paradise." An excerpt from Palestine Speaks

An excerpt from Muhanned Al-Azzah's portion of Palestine Speaks, part of the Voice of Witness series.

The following is excerpted from Muhanned Al-Azzah's portion of Palestine Speaks: Narratives of Life Under Occupation, part of the Voice of Witness series of oral histories. 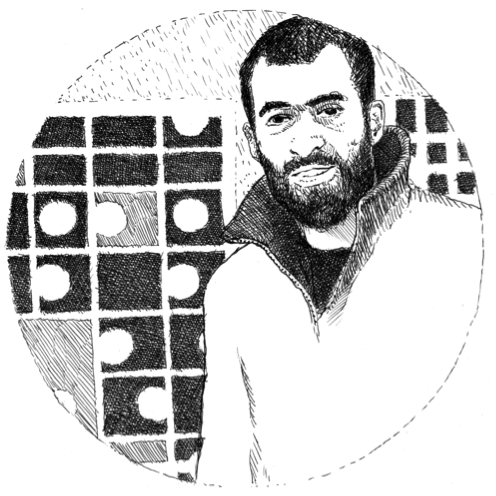 I was born here in the [Al-Azzah refugee] camp, in September 1981. My parents were born here too. In 1948, my grandparents on both sides left our land, our original village, Beit Jibrin, which is northwest of Hebron. Even though I’ve never visited Beit Jibrin, I feel I’m from there. I know all its details, since I’ve heard so much about it from my grandparents. I know that it’s our village…

I grew up dreaming of Beit Jibrin as a paradise. My grandparents always told us about how great life was for them there. Their home and garden in Beit Jibrin were as big as the whole refugee camp where my family lives now. All of my family has hoped that one day we’d be able to return there and live again in our own home.

That’s why we were against the Oslo Accords in the mid-nineties. The accords officially made the land that Beit Jibrin was on part of Israel. For us, we’ve always wanted a single state between Israel and Palestine so that we can return to Beit Jibrin. We didn’t want to accept the Oslo Accords, and some parties in Palestine didn’t either. The PFLP opposed the accords and the idea of two separate states that took our land in places like Beit Jibrin and just gave it up to Israel. The PFLP also supported the right of return, the rights of Palestinians to reclaim land lost in the war during the Nakba. So as I grew up, although there wasn’t really a single time or event that led me to it, I came to join the PFLP…

As I grew up, I got more and more into art. My father was an Arabic literature teacher, and my parents sent me to classes and workshops in Palestinian art at a young age. I grew up seeing art as a way of resistance, through graffiti. During the First Intifada, in 1987, there was no media, there was no radio to cover all that was happening in Palestine. But there were the walls of the houses. They were the only place for media. For example, if there was to be a strike the next day and everyone had to close their shops, there was no simple way to get the message out. So in the night, some people with masks would go into the street with spray paint and write, “Tomorrow, August 9, will be a day of strike for all the shops and schools.” So in the morning, everybody could see it.

And every day, when the people went outside, the first thing they did was look at the walls. Sometimes the message was, “Next week, we are gathering for a demonstration on Tuesday.” Sometimes there was writing about a martyr, someone who was killed in Bethlehem. The soldiers, when they came in the camp, they’d go crazy when they found this writing on the walls. They would arrest people, and every day there was a fight over who should clean it up. Some people cleaned it, some people refused. And it was very dangerous when artists went out at night to write on the walls.

I was doing some of the same sort of thing even as a teenager. Art was my own individual way of resisting, but we can’t do much just as individuals to resist—that just leads to chaos, so that’s why I joined the PFLP. More than anything I wanted a chance to go back some day to live in Beit Jibrin, and so a lot of my art has been about being a refugee, about wanting to return home…

[In April 2004, Israeli military arrived at Muhanned’s home in the middle of the night to arrest him and bring him to al-Muskubiya, a detention center in Jerusalem, where he was held under an Israeli system that allows for indefinite detention without specific charges.]

After about four months in al-Muskubiya, I was taken to military court. There were around twenty soldiers there, all with guns. I felt alone and threatened, and I think this was part of the game. They wanted to scare me in any way they could. But I felt strong, because I was not just one person, I was one with the Palestinian cause. I was a civilian, I had the right to resist occupation, and I didn’t care about what they would accuse me of. I didn’t listen to what they said, really. They charged me with political activism, activity against the Israeli state, and being a member of an illegal political party—the PFLP. They had no evidence against me that I was part of any attacks on Israel, just that I had promoted the PFLP. They gave me three years.

I was taken to a prison near Be’er Sheva around August of 2004, not quite four months after my arrest. The amazing thing was that the route that the prison bus took to get to Be’er Sheva took me right through the site where my home village, Beit Jibrin, used to be. I had never seen it before, so I tried to see as much as I could as we passed through. When I saw the village, I was shaken. My grandparents had said so many good things about it, about the good old days. I had dreamt of it as a paradise. But the land was barren except for a few trailers that make up an Israeli settlement. There was an old mosque, and lots of ruins—old stones and parts of buildings that were thousands of years old.

My grandparents had been driven from their home by force, and here I was seeing it, again only by force. It was hard. I was alone. It reminded me that I wasn’t with my family, and I always imagined I’d see the village some day with them. It was a bad, lonely feeling. It was almost like I had woken up from a coma—I couldn’t make sense of everything that must have changed from that time before 1948, a time I knew only in my dreams…

[After three years of jail time—at various points, held in solitary confinement, denied visitation rights, shot with pepper-spray capsules, and exposed to the desert sun for months at a time—Muhanned is released and returns to his art program at Abu Dis University.]

Palestinians and international organizations are always speaking about political prisoners in Palestine. Some Palestinian artists make posters, drawings, paintings, and they often depict prisoners as very big and strong, as guys who can destroy the walls of the jail. But I wanted to do something different. I wanted to speak about prison, about life from the eyes of a prisoner. My art was about how the prisoners see the outside world. I painted the bars of the windows, because that’s the view we knew. We never saw a view without the fence, without the windows. and when I went to visit my family, my mother, she was on the other side of the glass. So when I was looking at my mother, I saw my mother, but her face was never completely in view. I’ve painted glimpses of faces and people and houses and cars on small square canvasses to represent the way the outside world appears to prisoners, seeing the world through these little screens, through small glimpses.

I had an exhibition in London in 2011, and also one in Jerusalem, and a third one in Bethlehem. I am proud of that. But I know these paintings I made, somebody can take them for money and put them in his house and close them up. So the maximum number of people who will see these paintings is ten people, twenty people. But I believe that art is for all levels of society. I am from a refugee camp, and I am drawing for the poor people in Palestine, not for the bourgeoisie. I’m not doing a painting to keep it inside the house.

After I was released from jail, I started doing graffiti. Sometimes I and a couple of other artists used stencils, because we did a lot of painting in places where we are not allowed to paint, so we had to go fast. I did graffiti in the main street to let everybody see the drawing.

I believe art is resistance. The graffiti in Palestine, it’s not like the graffiti in any other place in the world. Because when you write something on the wall, this means it has a connection with the First Intifada and the revolutionary time.