As most young people, students, and recent college graduates are well aware, entering today's job market can be a terrifying endeavor. Long before the afterglow of post-secondary accomplishment has any time to fade (or even to appear, in the case of working students), the race is on for the next step toward gainful employment. In most cases, this means a highly competitive race to the bottom of the corporate ladder. 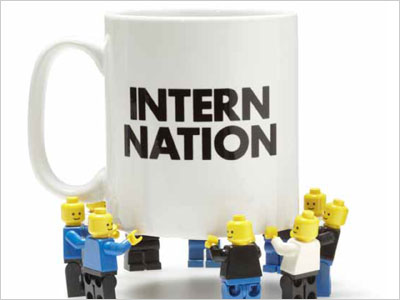 Unpaid internships represent a remarkable new wave of white-collar exploitation in North America and around the world. Each year, millions of job seekers put off dreams of financial independence and clamor for the chance to engage in any number of thankless and menial tasks (who here ordered the skinny latté?) for little to no acknowledgement, let alone compensation.

Especially in light of tightening post-recession budgets, internships are an increasingly popular and legally ambiguous source of low-wage or no-wage labour power. As a result, interns are quickly becoming an integral part of the corporate world's basic ability to function. Even here in Verso's NY office, the publication of our books has been assisted for years by a collection of brilliant and underpaid young radicals participating in our internship program.

Verso is currently producing a ground-breaking book that will shed much-needed light on the magnificent grey area that is the modern internship phenomenon. In Intern Nation (forthcoming from Verso May 2011), Ross Perlin brilliantly combines statistical, legal and anecdotal evidence to expose the greed and manipulation underlying internship programs in even the most well-known and prestigious companies, from Disney to Vogue.

"Internship", first and foremost, is a myth and a smokescreen, a marketing strategy that has spawned a job title. "You can get more out of the person because they're your intern," a politician (and former serial intern) said to me, explaining his "understanding of the internship culture". "What I did in my campaign [for Congress] is I advertised a bunch of internship positions—like ‘You can be the New Media intern, you can be Communications intern'—so I got these people to come more on a regular basis." Other employers described switching from advertising "summer jobs" to offering "internships" as a way to boost interest among young people; many confessed that "internship" was simply a buzzword they latched on to, looking for free, temporary help around the office. The fact that no definition of internship is in common use is particularly convenient in such scenarios—some people assume that they are unpaid by definition, while others think the exact opposite. Those closer to university campuses (and especially in career services offices) tend to claim an educational component, or assume academic involvement, despite the vast number of internships with no educational connection whatsoever.

Equally fascinating and disturbing, this book is certain to cause a major stir, calling into question the nefarious practices and basic assumptions driving the modern working world.

It must be said, speaking as one of the brilliant young radicals referenced above, that the experience of a Verso internship quite fortunately bears little resemblance to the more horrible tales woven throughout Intern Nation. Nevertheless, the book got everyone here talking a great deal about Verso's role in the exploitation of young workers. Could Intern Nation be published in an office that is itself full of underpaid and legally helpless interns? The magnificent hypocrisy of the situation was clear, and everyone knew that some major and immediate changes were in order.

Well, changes there were! Verso's internship program is now something that even the most skeptical intern can get excited about, most notably boasting regular training sessions and the provision of a livable wage.

Beginning in the summer of 2011, Verso will be offering this new and improved internship program to anyone interested in getting a world class introduction to book publishing and engaging a revolutionary political and intellectual project. Applications are being accepted until February 1st for the May-August position.

Expect more posts from this well-fed intern in the near future.