In the second part of the series Unlearning Decisive Moments of Photography, Ariella Azoulay examines photography's role in the destruction of the "New World" and suggests that despite its stained history, it can play a part in imagining ways out of this destruction.

This article first appeared on Still Searching, where Ariella Azoulay will be publishing a series of essays titled "Unlearning Decisive Moments of Photography". In her series of statements, Azoulay seeks to invert common assumptions about the moment of emergence of photography, and locates the origins of photography in the "New World" and in the early phases of the European colonial enterprise.The essays are based on the forthcoming book "Potential History: Unlearning Imperialism", which is out on Verso in Fall 2019.

To take this excursion to 1492 as the origin of photography—exploring this with and through photography—requires one to abandon the imperial linear temporality and the way it separates tenses: past, present, and future. One has to engage with the imperial world from a non-imperial perspective and be committed to the idea of revoking rather than ignoring or denying imperial rights manufactured and distributed as part of the destruction of diverse worlds. In order to clarify this trajectory, I will start with a few photos taken in different times and places, which I propose to explore alongside early accounts of imperial expeditions. Obviously, we do not have photos of the mass destruction of the late fifteenth century, but nor do we have images showing the destruction of so many other places that took place at a time when photography could have been used to record them. This doesn’t mean that destruction didn’t take place, or that it occurred differently, if the goal was to eliminate any elements in these existing worlds that resisted the implementation of imperial enterprises. It means that documentary protocols are insufficient and may even obstruct the attempt to understand destruction not as a contingent, discrete, or local event but as pervasive and constitutive of modernity—its major enterprise. For what has become pervasive since 1492 and changed our perception is not this or that technological device, such as the Kodak Brownie, or its products, namely photographs—a claim that is made again and again in the discourse on photography—but rather destruction. Hence, rather than conceiving of photography as a means to document discrete cases of destruction, we need to ask ourselves how photography participated in the destruction and ultimately examine if and how, on the basis of this acknowledgement, it can play a part in imagining ways out of it. 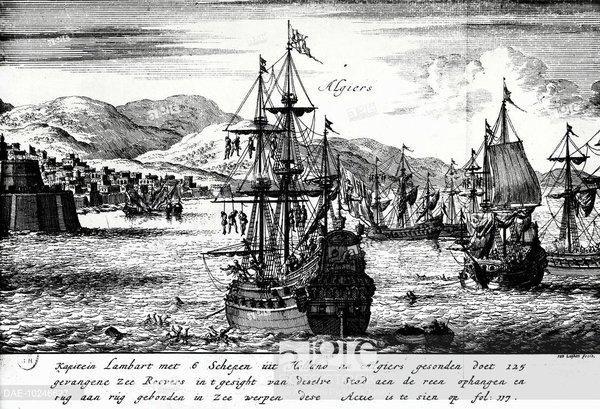 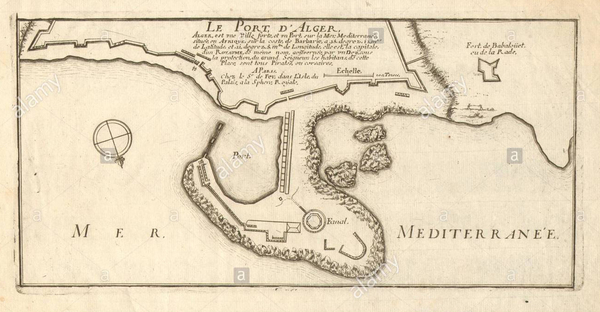 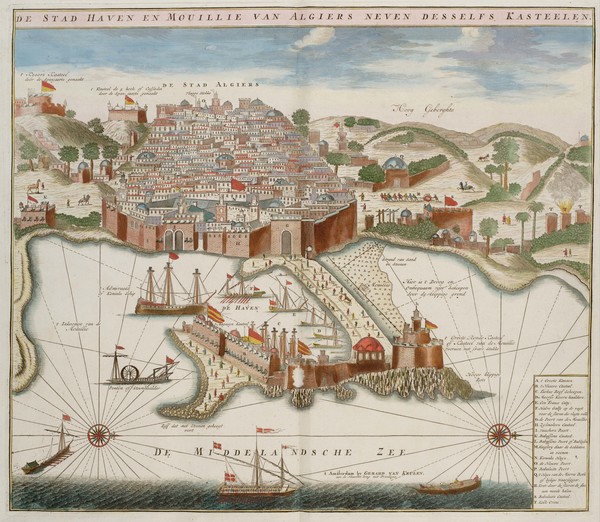 Let me start with three random engravings of Algiers and its port. What they have in common is the point of view of foreigners approaching the city from afar and looking at it from the outside. With the French invasion of Algeria, this point of view is reversed. An artist embedded with the colonizing powers in Algeria, Langlois was given the imperial right by the military forces to take up a safe position at the heart of the Casbah—where, it should be said, he was not welcome—and to generate multiple camera obscura images of the city. Taken from within, his images convey a view from the inside out, from the built city toward the sea.

Colonel Jean Charles Langlois, installation of 23 studies for the Panorama of Algiers, 1832.

Langlois used these images to create a panoramic view of the city, which he showed, shortly after its production, in one of the many panorama facilities in Paris. Without decades of imperial bombardment and the city’s final colonization by the French in 1830, this panoramic point of view of a foreign city from which the inhabitants had disappeared, as John Zarobell reminds us, would not have been possible. 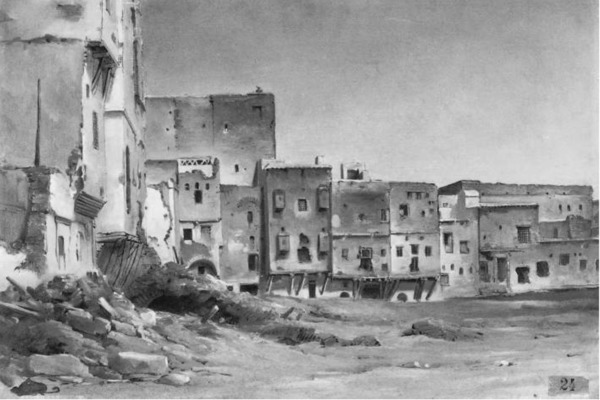 A moderate visual account of the demolished city is included in Langlois’s notebook. For a more comprehensive account of the destruction, we should look elsewhere and through a different lens. As already implied in the first post, my assumption is that the ubiquity of destruction both precedes and enables the ubiquity of photographs. The latter is derivative of the former and should be read in connection with it.

From this perspective, I propose to approach the vast photographic enterprise of capturing attractive buildings and exotic people in Algeria—a project that was conducted explicitly for advertising purposes as a means to attract French tourists and colonizers to enjoy the country’s beauty—as metonymically part and parcel of the destruction of Algeria. This enterprise was conducted by the Neurdein brothers and funded by the French government. While the military regime carried on its program of destruction, another group of imperial agents continued to capture and salvage, for a shorter or longer period, the “best sample” of doomed Algeria’s architecture.

Here, in these photographs and in others taken a few hundred years after the invention of the new world, I invite you to see the exercise of these same imperial rights that were already proclaimed and enacted in early letters written by Amerigo Vespucci at the turn of the fifteenth century. These new rights, whose exercise involved mass destruction, are manufactured under the pretext of the promotion of knowledge involved in the discovery of “new worlds.” At the beginning of the first of his four letters, Vespucci describes what was given to them by the people he and his expedition encountered: “Whatever was asked of them, they gave at once, though more out of fear than of love.” Not surprisingly, since twenty-two of them were “well-armed men.” “Each day,” Vespucci continues, “we discovered an infinite number of people and various languages until having sailed four hundred leagues along the coast, we began to encounter people who did not want our friendship” (Vespucci, 11). Shortly thereafter, Vespucci starts depicting these people as enemies, since they stood in the way of their invaders and “prevented our landing, so that we were forced to fight with them” (11). What is assumed to be their right to pursue their mission and have unlimited access to any place, sacred places included, cannot be curtailed by other people, who are described as well installed in a world of their own, whose houses are “built with great skill” and “full of very fine cotton wool,” but also at the same time as people who are “naked, ever fearful and of feeble mind” (13–15). Vespucci and his men continued to fight against the local inhabitants who objected to their invasion, until they “routed them and killed 150 of them, and set fire to 180 of their houses” (12). Vespucci concludes the first letter with the achievements of this expedition articulated in the form of the goods they “brought back.” This harvest is not described as the outcome of the exercise of violence against the native inhabitants of the places they invaded. It is instead depicted as an expression of the invader’s sharp eye, of his connoisseurship of what might be appreciated by their sovereigns, and the outcome of the exercise of the right to appropriate others’ wealth, resources, and labor: “We brought back pearls and gold in its nascent or crude state. We brought back two stones. . . . We brought back a large piece of crystal. . . . We brought back fourteen pearls the color of flesh” (16). I propose to proceed by reading these letters outside of the constraints of the archive, which invites us to assume that they pertain to an early phase of imperialism, capitalism, or globalization, and instead reconstructing from them the set of imperial rights that continue to lie at the basis of our political regimes. It is well known that these expeditions didn’t stop with Vespucci: “we” brought back—with much care, against many challenges, and under well-established preservation protocols—types, precious objects, art, and wealth and destroyed the social fabrics, the political structures, and the systems of rights and beliefs of which they were part. 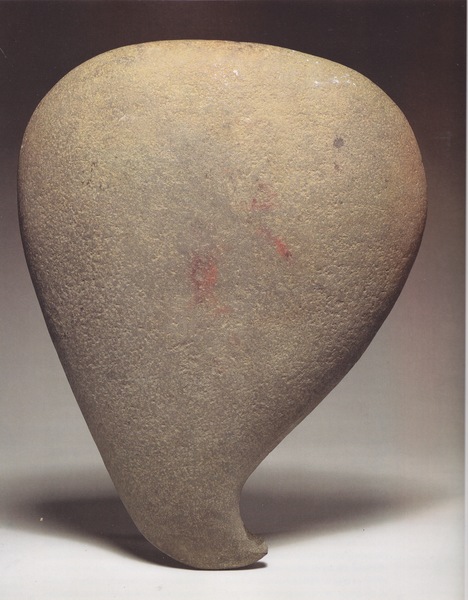 Let me end this section with one photograph of a single object. Carefully collected and preserved in a French museum, this Taino object cannot be reduced to what was made out of it—a work of art that fits into its “right” place in an imperial history of art. Nor can it be reduced to the documentary value of its photograph, complete with its meta-data asserting when and where it was taken, and the identity of the captured object. It is only through imperial ideologies, such as that of the documentary or of a universal art, that we can view this isolated object not as the encapsulation of the imperial violence involved in the annihilation of the people of which it was part. Deciphering the photographic information in a different way and unlearning the documentary protocols, this image can no longer be viewed as a work of art from a bygone age but rather as an object in which non-imperial rights are inscribed that could potentially be restored.