An excerpt from The Conservation Revolution: Radical Ideas for Saving Nature Beyond the Anthropocene by Bram Büscher and Robert Fletcher, on sale for 40% off until Wednesday, March 4 at 11:59PM EST.

A revolution in conservation is brewing. This is not necessarily an event that makes everything different. Rather, a growing urgency and pressure are building towards radical change. Even a cursory glance at conservation debates over the last decade shows that pressures on species and ecosystems – and hence the conservation community concerned with saving them – are extremely high and are certain to further increase. It has led to a growing realization that incremental, reformist change will not suffice to alleviate the pressure. The question for conservation is no longer whether we want or need radical change. It is brewing regardless. It is already happening. The question is how we understand the pressures and help direct imminent radical change towards something positive. This is the crossroads facing the conservation community today.

Now, the statement that conservation is at a crossroads has been true for a long time. Conservation biology, for example, has consistently portrayed itself as a ‘crisis discipline’. Making ‘hard choices’ in complex contexts has always been part of the conservation equation. Yet the recent discussions concerning the advent of the Anthropocene seems to have upped the ante considerably, rendering already hard choices even more difficult. In this brave new world, ongoing debate concerning appropriate conservation strategies has moved beyond the longstanding ‘people versus parks’ dispute that had previously divided conservationists for decades. In the last decade, a number of radical alternate approaches to contemporary mainstream conservation have emerged. The two most prominent of these are ‘new’ or ‘Anthropocene’ conservation, on the one hand, and the ‘neoprotectionist’ or ‘new back-to-the-barriers’ movement, on the other. Together, these have caused quite a rift among conservationists.

According to new conservationists, life in the Anthropocene places an unprecedented and special burden on humans. Homo sapiens are seen to have changed global ecosystem functioning to such a degree that they now have to cultivate and manage the earth as one immense ‘rambunctious garden’.1 This is not necessarily something negative. Instead of only mourning biodiversity loss due to anthropocenic ecosystemic change, new conservationists believe we should switch focus to understanding and supporting the new and even potentially exciting possibilities that current global changes may bring.2 Hence, what makes new conservation radical is that it aims to do away with conservation’s long-standing infatuation with wilderness and associated ideas about ‘pristine’ nature as well as the conviction that these can be conserved as untouched protected spaces, away from humans. Nature and ecosystems always change, new conservationists argue. So why not embrace the ‘new natures’ that are currently evolving and use them to support human development?

To say that this perspective became a lightning rod is an understatement. After its opening salvos in 2011 and 2012, the new conservation proposal immediately provoked strong responses. Amongst these was a resurgence of ‘neoprotectionism’: a longstanding movement calling for a return to protected area expansion and enforcement. Unlike new conservationists, neoprotectionists do not believe that human-induced change is something (potentially) positive. Quite the contrary: they fear it will be the earth’s undoing, precipitating the downfall of Homo sapiens and innumerable other species in the process.3 In the face of new conservation’s bold acceptance of global human-centred conservation management, therefore, neoprotectionists have also upped their game considerably. Instead of putting humans in charge, they want to put nature back in charge. Many even argue that at least half the entire planet must be set aside in a system of protected areas reserved for ‘self-willed’ nature. Only in this way, they assert, can an impending global ecological catastrophe be averted.4 Instead of the radical mixing of people and nonhuman nature that new conservationists endorse, resurgent neoprotectionists call for a separation between people and nature on a scale hitherto never imagined.

These two radical proposals present far-reaching challenges to what we will refer to in this book as contemporary ‘mainstream conservation’.5 Mainstream conservation, many will agree, is not easy to define. In reality, it constitutes a very broad amalgam of different approaches, ideas and dynamics. Yet two key characteristics, we believe, based on our research over the last twenty years, can be singled out and generalized across this constellation for heuristic purposes. Mainstream approaches, first, still revolve very much around protected areas with strong links to broader participatory, stakeholder-focused approaches, including community-based conservation models. A second main characteristic of mainstream conservation is its capitalist character. This has been true for a long time but is increasingly focused on the idea that conserved nature can be turned into in situ ‘natural capital’ so that the creativity of the pursuit of profit can effectively and efficiently be linked to the protection of nature and the ‘environmental services’ it provides. The following chapter will expand on what we mean by mainstream conservation and relate this to the radical challenges brought by the emergence of the Anthropocene.

The Challenges of the Anthropocene

Popularized by geologist Paul Crutzen at the turn of the twenty-first century, the Anthropocene thesis is essentially the assertion that human influence has come to dominate all nonhuman processes to the point that it can now be identified as a distinct layer in the geological record.6 The Anthropocene should thus designate our movement from the Holocene into a new epoch characterized by this pervasive human signature. The notion resonates with a similar contention by journalist Bill McKibben that expansion of human influence – particularly in terms of anthropogenic climate change – has precipitated the ‘end of nature’ as a distinct self-willed force altogether. Contemporary discussion of the Anthropocene contains quite similar proclamations that ‘Nature is Over’ or that ‘Nature no longer runs the earth. We do’.7

The Anthropocene thesis, clearly, is a grand one. It is not surprising, therefore, that the concept and its implications have been and continue to be hotly debated, including among social scientists. Some, including many neoprotectionists, suggest that it exaggerates the extent of human control over the planet, proposing that nonhumans (from microbes to cereal grains) can instead be understood as colonizing and directing human processes.8  Others worry that the concept conceals the reality that different groups of people have vastly different environmental impacts behind the image of a generalized ‘humanity’.9 Yet others, including some critical social scientists, have embraced the idea. They assert that this new reality completes the demise of the idea of an autonomous nature already initiated by critical perspectives in diverse scientific and philosophical traditions.

Human geographer Jamie Lorimer thus states that  ‘diagnosis of the Anthropocene challenges the modern figure of Nature that has become so central to Western environmental thought, politics, and action.’ Rather, ‘the Anthropocene describes a very different world. This world is hybrid – neither social nor natural. It is nonlinear rather than in balance. Futures will not be like the past and will be shaped by human actions. Multiple natures are possible’.10

Social scientists who accept the Anthropocene see positive potential in how this new reality forces humans to acknowledge the extent to which their actions influence the planet and to therefore take their obligation to responsibly steward it more seriously. Lorimer asserts:

The diagnosis of the Anthropocene and the popularization of the ‘end of Nature’ has the potential to value and catalyze modes of ‘stewardship’ based on diverse, reflexive awareness of the always-entangled nature of humans with their environments, the indeterminacy of ecology, and thus, the contested nature of any aspirations toward environmental management – from the local to the planetary scale.11

In this way, people may become ‘aware of the impossibility of extricating themselves from the earth and start . . . to take responsibility for the world in which they live . . .’12

Taking heed of these different positions, the question of whether we should label our current era the Anthropocene is important. Later in the book, we will argue that a better descriptor for this new phase of human history is the ‘Capitalocene’, as argued by Andreas Malm, Jason Moore and others.13 For now, however, we will continue to use the term since it has played such a pivotal role in the current conservation debate. Moreover, despite continuing debate concerning its validity as a scientific descriptor of the geological record, the last several years have seen the Anthropocene concept become increasingly used and accepted in both academic and popular media. The term, in short, has hit a raw nerve, prompting exploration of its grand implications.

Several of these implications present intriguing challenges for conservation, particularly for how to (re)interpret conservation science and what this says about our contemporary socio-ecological predicament. The dominant tenor from the scientific front is that the state of global biodiversity is dire, keeps getting worse and may soon surpass ‘planetary boundaries’ beyond which even more dramatic decline is inevitable. Some even argue that we are on the brink of ‘biological annihilation’.14 Yet, if the Anthropocene forces us to rethink basic assumptions of both the natural and social sciences – and hence the ‘social’ and the ‘natural’ more generally – it may also demand that we rethink this dominant position. This is something that the new conservation trend has taken to heart.15

The Anthropocene challenge is not just about how to act on what ‘science’ teaches us concerning the state of the global environment. Another equally fundamental challenge is that it has given massive impetus to long-standing discussions on how to (re)interpret the (role of) science in the first place.16 These major challenges for conservation are at the centre of the current conservation debate, one that increasingly seems to demand radical choices.

8  Anna Tsing, The Mushroom at the End of the World: On the Possibility of Life in Capitalist Ruins (Princeton: Princeton University Press, 2015).

15  Biologist and ecologist Chris Thomas explicitly argues that we need to ‘throw off the shackles of a pessimism-laden, loss-only view of the world’ and ‘aspire to a world where it is as legitimate to facilitate new gains as it is to avoid losses’. Thomas, Inheritors, 9. For a critique, see Carl Safina, In Defense of Biodiversity: Why Protecting Species from Extinction Matters, (Yale Environment 360, yale.edu, 2018). 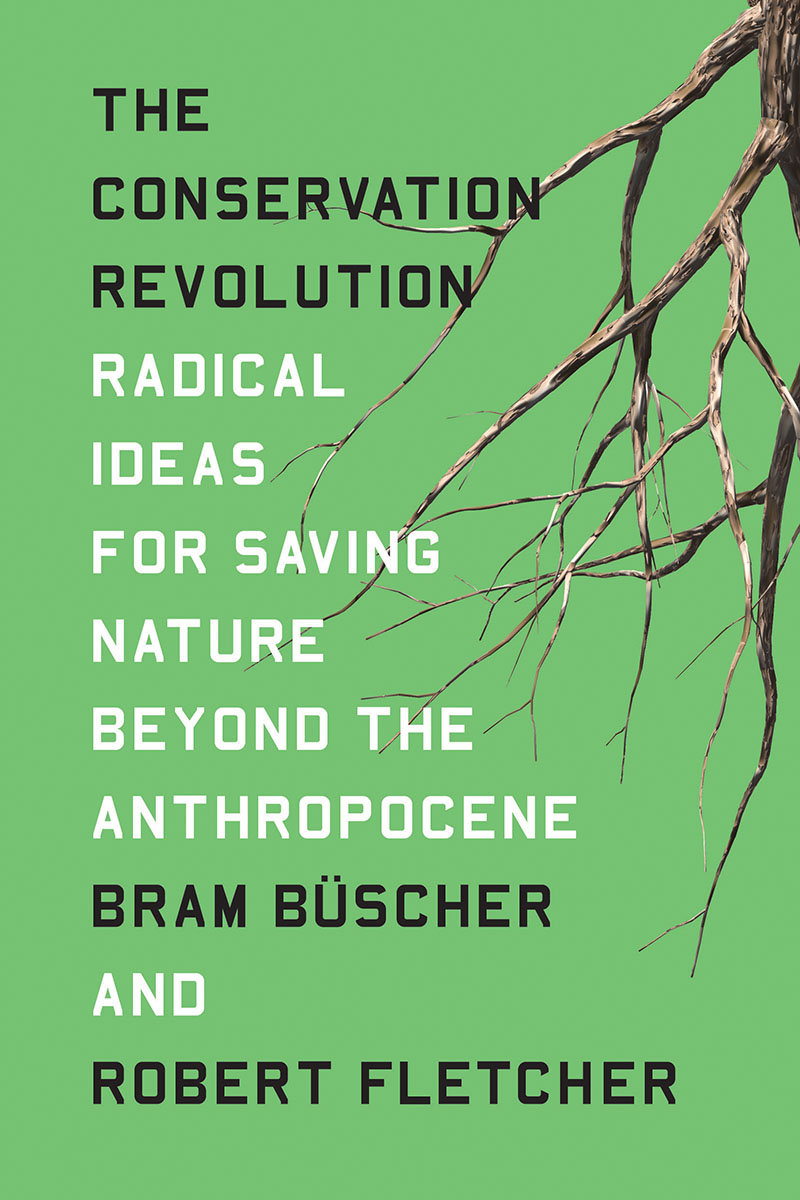