"This cover should feature an animal eating its own tail."

A note from our art director, Melissa Weiss, on the cover design process for Cannibal Capitalism

"At the author's insistence, this cover should feature an animal eating its own tail."

Not every cover design brief begins with such a sentence – and that's for good reason. But in the case of Cannibal Capitalism, the author's directive proved generative. In the new book from leading critical feminist scholar Nancy Fraser, animals eating their own tails function as a central metaphor.

The ouroboros, literally meaning "tail-devourer" in Greek, is an ancient symbol dating back to 13th century Egypt. Usually depicting a snake eating its own tail, the symbol historically represented repetition and eternal renewal. In the context of Cannibal Capitalism, the symbol takes on the more literal meaning of self-cannibalism, pointing to contemporary capitalism’s self-perpetuating, destructive appetite. Or, as Fraser unapologetically puts it, the ouroboros invites us to see society "as an institutionalized feeding frenzy—in which the main course is us."

No matter how directive a design brief is (e.g. "Put an ouroboros on it."), its translation into a successful cover relies on the creative, conceptual, and technical wherewithal of the designer who works on it. For the cover of Cannibal Capitalism, we commissioned the brilliant Canadian designer, David Gee, to develop three distinct design directions. While all of the initial directions were strong, there was little disagreement among my colleagues about which direction was most appropriate for the book.

In David's words, the final cover is "classically Capitalist," featuring Romanesque type and historical imagery printed in gold metallic Pantone. It is a bold but also approachable design – a visual hook, we hope, for the unlikely reader, who, after after encountering Fraser's work for the first time, might come to recognize capitalist society for what it is – "a veritable dynamo of self-destabilization... routinely eating away at the bases of our existence" – and join us in working towards a decidedly different kind of future. 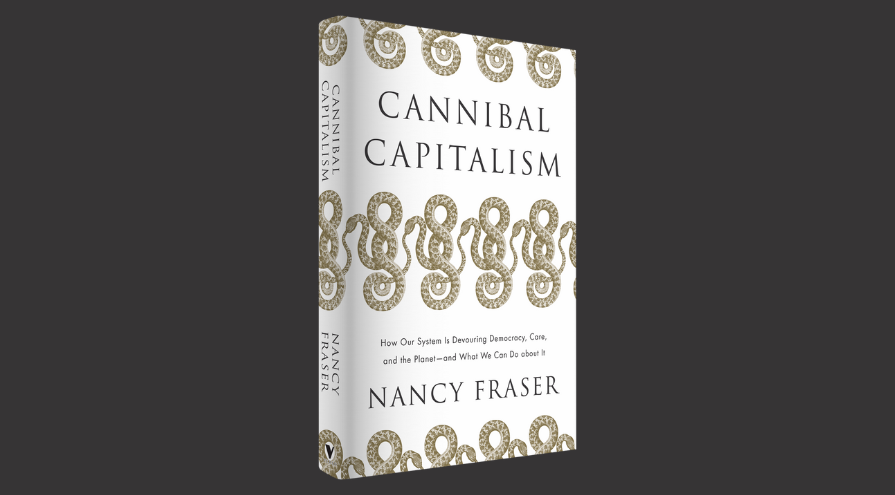