Fighting in a World on Fire: A letter from the Editor

"This is an experiment for Verso" – Sebastian Budgen, Editorial Director.

Fighting in a World on Fire: The Next Generation's Guide to Protecting the Climate and Saving Our Future by Andreas Malm is part of our February Verso Book Club reading. See the rest of our spring book club picks here.

I think it’s fair to say that Andreas Malm, when he wrote How to Blow Up a Pipeline, hoped that the book would have a political impact in the broad ecological circles, but that he very much underestimated its broader effect. Not only has the book been widely praised and also been the subject of vigorous debate, but it has also been recently turned into an action movie that will be on screens very soon! (My 8 year old son was also delighted to learn that Andreas had been approached by a computer games designer…)

So, when Andreas received a letter like this, we had to sit up and pay attention:

Thank you so much for your courage and dedication to writing this most excellent and important book. I really mean that. Wow. It's just exactly what humanity needs right now.

I'll be brief here. I am a 62 year old Montessori middle school teacher in Oregon. Many of my students have gone on to be activists in high school and beyond, so I have a particular insight about why your book should include a Young People's edition.

I mean, your book is obviously IT, and needs to be read by as many people as possible, as soon as possible. A Young People's version would be tailored to the 14-19 year old demographic. And they will "get it." A lot of them already do. Many, however, will struggle with the advanced vocabulary.

I don't know about the logistics regarding this proposal. I mean, I am willing and eager to write the Young People's version. I have already written a short passage, through page 13, to give you an idea of what I'm proposing. Basically, it's word for word, with the challenging words broken down for easier accessibility and comprehension.

Oh! I should mention that I am not interested in any financial compensation from this project. I have a job and am fine. I have no other motive than getting your book into as many young people's hands as possible.

So. I'm a teacher with the summer off. I just read your brilliant book. I'm ready to do this thing right now. I would so appreciate some guidance from you about taking the next step. I will attach a file with the sample I've written.

Again, thank you so much for all your work,

On the one hand: great! Someone is offering to “translate” the book to a crucial demographic sector that we very rarely touch for most of our books.

On the other hand: oh no! We have zero experience of publishing books in the YA non-fiction market, and this involves all sorts of experience, networks, skills and so on that are highly specific to this slice of the readership. Isn’t this going to be a lot of work and energy on our part for a result that is far from guaranteed? Shouldn’t we stick to safer projects that we have a better grip on?

Actually, this isn’t the first time that we have considered the possibility of reaching our younger readers. Our archives tell us that, in the early 1990s, Quintin Hoare and Branka Magas proposed “a Verso history series aimed at children”:

What we have in mind is a series of short books (from 50 to 150 pages, 15,000-45,000 words, with black-and-white illustrations, photos, maps, etc.), aimed at the 13-15 age group. Notoriously, state schools in this country have no fixed learning programmes, though their curricula from the age of about 13 upwards are increasingly structured by external examinations. What are needed are books on mainstream topics of self-evident ’relevance’, but which are not directly tailored to examination requirements.

The books would be inspired by two guiding ideas. First, that the human past is a comprehensible totality, which has by definition formed present reality, and understanding of which is essential for action in and upon that reality. Second, that ‘men’ make their own history, under certain ‘objective’ material constraints, a fact which imbues study of the human past with a particular excitement for the child just entering (potentially, at least) upon an overall view of the world in which he/she lives. Their main distinguishing features can most easily be defined in contradistinction to the overwhelming mess of what at present exists. They would aim to be: written from the implicit standpoint of a post-capitalist, post-imperialist future; identified with the general notion of change and progress; committed in stance, not necessarily in language (cf. Hobsbawm at his best); synthetic (e.g. of mode of production, relations of production, economy, demography, politics, class, geography, events, individuals, ideas); interpretative, not merely descriptive; systematic, not eclectic; not anglo-centric, europo-centric, even where dealing with British or European history; truthful and demystificatory – neither hagiographic, nor cynically ‘objectivist’.

Like most existing educational series, these books should be written to order, on the basis of available secondary sources, and not be seen as original works by professional historians. In some cases, it might be possible to use a ‘co-authorship' formula to cover what would basically be a rewriting job (e.g. of a work like The Age of the Democratic Revolutions of Industry and Empire); in others, comrades who are historians might write books directly. But in most cases comrades without any necessary prior knowledge could take on particular titles as an essentially journalistic assignment. The series would require no outside editor, and would be eminently suitable for NLB and NLR comrades themselves to contribute titles to. It would, however, obviously need careful in-house reading and editing, perhaps outside design and teacher consultants.

Finally, the format should ensure: 1. that the text is set out with maximum clarity and concision for assimilation by children; 2. that illustrative material is abundant and imaginatively conceived, but always subordinated to the text; 3. that there is a uniform system of division and sub-division; highlighting of key themes; introductory, linking and summarizing passages; indication of further reading; use of inset boxes à la Time magazine for supplementary information; and so on.

Sadly, however, this is a project that remained at the drawing board stage.

This time round, however, we had three major advantages: i) two committed authors (Jimmy worked with his teenage child Llewyn on the adaptation); ii) an editor, Jessie Kindig (now moved to Yale University Press) who was keen to try something new; iii) a publicist, Michelle Betters, who had already had some experience with YA books at Beacon. But, still, this is an experiment for Verso. If it is successful, we would certainly be interested in discussing the possibility of other publications aimed at a younger readership. Key, I suppose, is not just our ability to sell books to adults who buy books for their children, grandchildren, nephews and nieces, or our ability to reach librarians and progressive schoolteachers, but our capacity to directly tap into the teens themselves, enclosed as they are in their own social media ecologies and so on. The jury is still out on that. Certainly, it would help if we could engineer a conservative backlash on Fox and so on the same scale as or larger than the one surrounding Communism for Kids. Constructive suggestions gratefully received!

Meanwhile, my son is now ten. He still plays computer games, but he is on p. 62 of Fighting in a World on Fire.

What kinds of drastic steps are needed? What kind of bold actions can the climate justice begin using to bring a stop to climate destruction, and that can be employed alongside existing strategies of mass protest, awareness, and legal appeals? Why does our society consider profit for oil companies more important than the future of young people and the health of our shared environment? In this adaptation of Andreas Malm’s best-selling book on the need for a bolder, more confrontational climate justice movement, these urgent questions are brought to the most important audience of all: those who are growing up in a world on fire. 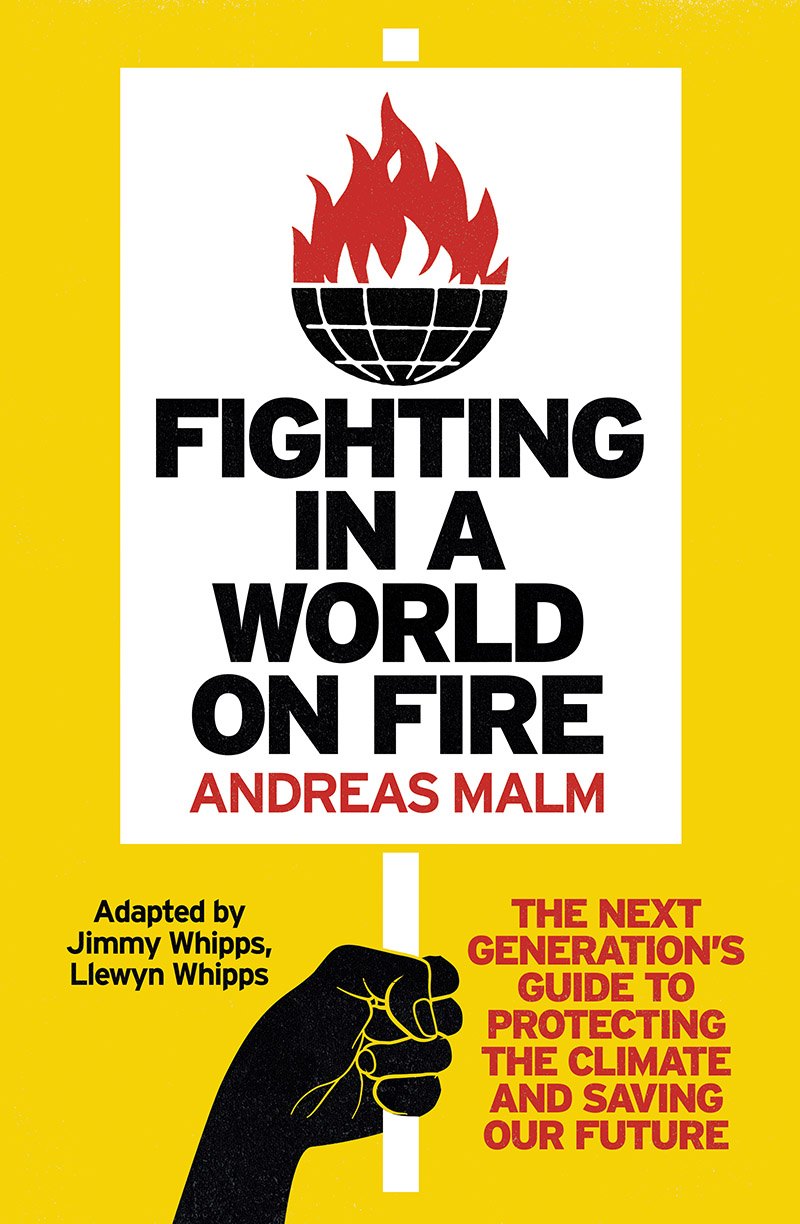 Fighting in a World on Fire
by Andreas Malm