The fight for fair internships picks up pace

In an interview for New Left Project, Intern Nation author Ross Perlin outlined the next step in pushing the UK government to take action against exploitative and exclusionary internships:

One thing that needs to happen is for interns themselves to make a show of force. If a large number of interns gathered in one place outside of an employer that does this sort of thing, or outside of Parliament, or Congress in the US, I think that in itself would have a significant effect. As it is, the problem seems relatively abstract to a lot of people. Interns see themselves as individuals or free agents, making their own decisions, not really thinking more as a group.

Last week, the ball got rolling. On Wednesday, Ross joined the National Union of Students and campaign groups Intern Aware and Internocracy to present the Intern Bill of Rights in a rally outside parliament to 'Imagine a Day Without Interns.' Interns and allies then gathered at a meeting in the House of Commons to discuss ways of putting an end to the current system of rights-abusing, privilege-entrenching internships. 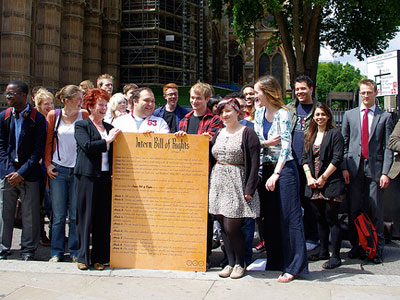 Labour MPs Hazel Blears and Stella Creasy called for reform, beginning at home—Westminster currently relies on 18,000 unpaid intern hours each year. Ross warned of the US-style situation Britain risks sliding towards if action isn't taken now. Tanya de Grunwald, founder of careers advice website Graduate Fog, drove home the fact that not only are they unfair, many internships are also illegal—calling an unpaid or underpaid worker an intern (a legally meaningless term) is no defence in the face of the national minimum wage (NMW) law.

The problem is that, as Tanya argued, the enforcement mechanisms currently in place put far too much of the burden on the intern—why would you report the person you're trying so desperately to impress? She suggests something as simple as a phone line for taking reports of postings for intern vacancies that appear to be in violation of the NMW law.

In the meantime, it's an area where trade unions have an obvious and important role to play. The problem is not only that interns see themselves as individuals but that in the workplace they often are exactly that—isolated, vulnerable individuals. This is where the collective power of the unions comes in, a point that Keri Hudson made compellingly at the meeting. 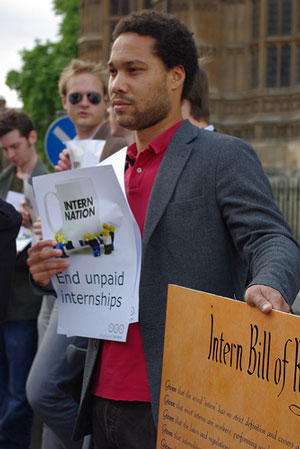 Keri interned at website My Village where she received no pay despite being responsible for a team of writers and even for hiring other interns. The National Union of Journalists (NUJ) got behind Keri with their Cashback for Interns campaign, helping her take her former employers to court, where she secured £2,000 in back pay and damages.

NUJ General Secretary Jeremy Dear spoke, alongside Ross Perlin, Trade Unions Congress (TUC) Deputy General Secretary Frances O'Grady and Lisa Nandy, Labour MP for Wigan, on a panel on internships at the TUC, the evening before the action at parliament. The panel argued that—given it's a problem that encompasses the precariousness of casual work, the perpetuation of privilege, the abuse of labour rights and the undermining of other workers' positions—it's absolutely something for trade unions to be tackling.

The point is underlined by John Brissenden in his review of Intern Nation at New Left Project, which argues that internships must be recognized as a class issue and one that the Left should be taking on.

Visit New Left Project to read the interview and review in full.