Paul Nizan's The Conspiracy: "A style for combat"

Nizan speaks about youth. But a Marxist has too much historical sense to describe an age of life - such as Youth or Maturity - in general, just as it marches past in Strasburg Cathedral when the clock strikes midday. His young men are dated and attached to their class: like Nizan himself, they were twenty in 1929 - the heyday of 'prosperity' in the middle of the post-war period that has just ended. They are bourgeois, sons for the most part of that grande bourgeoisie which entertains 'anxious doubts about its future', of those 'rich tradespeople who brought up their children admirably, but who had ended up respecting only the Spirit, without thinking that this ludicrous veneration for the most disinterested activities of life ruined everything, and that it was merely the mark of their commercial decadence and of a bourgeois bad conscience of which as yet they had no suspicion.' Wayward sons, led by a deviation 'out of the paths of commerce' towards the careers of the 'creators of alibis'. But in Marx there is a phenomenology of economic essences: I am thinking, above all, of his admirable analyses of commodity fetishism. In this sense, a phenomenology can be found in Nizan: in other words, a fixing and description, on the basis of social and historical data, of that essence in motion which is 'youth', a sham age, a fetish. This complex mixture of history and analysis constitutes the great value of his book.

Nizan lived his own youth to the dregs. When he was immersed in it and it barred his horizon on every side, he wrote in Aden, Arabie: 'I was twenty, I won't let anyone say those are the best years of your life.' He felt then that youth was a natural age, like childhood, although far more unhappy, and that responsibility for its miseries should be laid at the door of capitalist society. Today he looks back on it and judges it without indulgence. It is an artificial age, which has been made and which makes itself, and whose very structure and existence depend upon society: the age of inauthenticity, par excellence. Workers at twenty, however, are protected from it by misfortunes, by worries, by the contact they must make in order to survive: they 'already have mistresses or wives, children, a profession . . . in short a life'; once they leave adolescence, they become young men, without ever having been 'young people'. But Laforgue and Rosenthal, sons of bourgeois families, students, live that great abstract ennui to the full. Their fatal lightmindedness and their aggressive futility are due to the fact that they have no duties and are by nature irresponsible. They 'improvise' and nothing can engage them, not even their membership of extremist parties: '. . . these diversions . . . had no great consequences for the sons of bankers and industrialists, who could always return to the embrace of their class. . . .' Very wise perhaps, if these improvisations sprang from a brief contact with reality. But they remain in the air and their authors forget them at once. Their actions are puffs of smoke, they know this and it is what gives them the courage to undertake things - though they pretend not to be aware of it. What are we to call them, these undertakings so serious yet so frivolous, if not 'conspiracies'? But Laforgue and Rosenthal are not Camelots du Roi: young bourgeois can come and make their plots at the other end of the political spectrum, even in the parties of grown men. We can see what that fine word 'conspiring' hints at in the way of whisperings, little mysteries, hollow consequence and invented dangers. Tenuous intrigues: a game. A game - that great 'Dostoievskyan' plot hatched by Rosenthal, the only traces of which will be two incomplete and in any case totally uninteresting files at the back of a drawer. A feverish, angry game, an abortive conspiracy, that manufactured love which Rosenthal entertains for his sister-in- law. From calling it a game, moreover, it is but one short step to calling it play-acting: they lie to themselves because they know they are running no risk; they strive in vain to frighten them- selves, in vain - or almost - to deceive themselves. I can just imagine the great, dumb sincerity of labour and physical suffering and hunger that Nizan would counterpose to their endless talk. Bernard Rosenthal - who from anger and sloth has performed the irreparable actions of suicide - will in fact know no other reality than the agony of death. The agony of death alone will show him - but too late - that 'he had missed love . . . that . . . he no longer even loved Catherine and he was going to die cheated'. Yet those young people have the semblance of good intentions: they want to live, to love, to rebuild a world that is tottering. But it is at the very heart of these good intentions that the abstract, self-assured frivolity lies which cuts them off from the world and from themselves: 'their politics is still based only upon metaphors and shouts'. For youth is the age of resentment. Not of the great anger of men who suffer: these young people define themselves in relation to their families; they 'tended to confuse capitalism with important people'; they expect to find 'a world destined for great metamorphoses', but what they want above all is to give their parents a bit of trouble. The young man is a product of the bourgeois family, his economic situation and his world-view are shaped exclusively by the family.

These young people are not all bad men. But Nizan shows very clearly how only through revolution can one leave this age, which Comte called 'metaphysical'. Youth does not bear its solution within it: it must collapse and be rent apart. Either it is the young man who dies, like Rosenthal, or he is fated by his family inferiority complex like Pluvinage to drag out a perpetual, wretched adolescence. There is a breakdown of youth for Nizan as there is a breakdown of childhood for Freud: the pages in which he shows us Laforgue's painful initiation to man's estate are among the finest in the book.

I do not think Nizan wanted to write a novel. His young people are not novelish: they do not do much, they are not very sharply distinguished from one another; at times they seem only an expression, among many others, of their families and their class; at other times, they are the tenuous thread connecting a number of events. But this is intentional: for Nizan, they do not deserve more; later, he will make them into men. Can a communist write a novel? I am not convinced of it: he does not have the right to make himself the accomplice of his characters. But in order to find this book strong and fine, it is enough that on each page you find the obsessive evocation of that unhappy, guilty time of life; it is enough that the book constitutes a hard, true testimony at a time when 'the Young' are forming groups and congratulating themselves, when the young man thinks he has rights because he is young, like the taxpayer because he pays his taxes or the father because he has children. It is a pleasure to find, behind these derisory heroes, the bitter and sombre personality of Nizan - the man who does not forgive his youth - and his fine style, taut and casual: his long Cartesian sentences, which sink in the middle as though no longer able to sustain them- selves, but all at once spring up again to finish high in the air; and those rhetorical transports which suddenly come to a halt, giving way to a terse and icy verdict. Not a novelist's style, sly and hidden: a style for combat, a weapon. 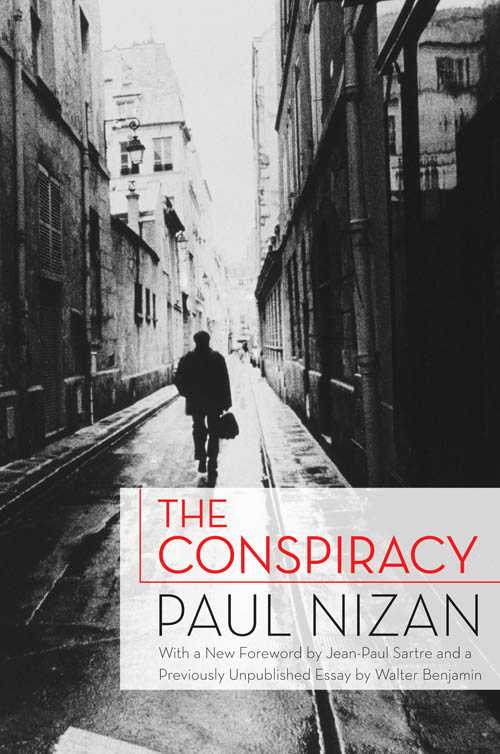