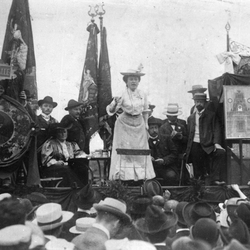 Made possible by the support of the Rosa Luxemburg Stiftung.

DEBORAH EISENBERG, an American short-story writer, actor and teacher who received a MacArthur Fellowship in 2009, is the author of several collections of stories including The Collected Stories of Deborah Eisenberg which has just been named a finalist for this year's PEN/Faulkner Award.

Vivek Chibber (host and chair) is Associate Professor of Sociology at New York University and author of Locked In Place: State Building and Late Industrialization in India as well as many articles on imperialism, Marxist theory, long-term historical change, and the political economy of development. He is associate editor of the Socialist Register, and is on the editorial board of the Journal of Agrarian Change, Politics and Society and others.

Annelies Laschitza, based in Germany, has produced a number of works focusing on the history of the labor movement in Germany at the end of the 19th and the beginning of the 20th Century century. She has achieved worldwide recognition for editing of the Collected Letters of Luxemburg [in 6 volumes] as well as serving as co-editor of Luxemburg's Collected Writings [in German]. She worked as a consultant for Margarethe von Trotta's film "Rosa Luxemburg" [1986] and has produced an important [600-page] biography of Luxemburg, Full of Life, Despite Everything. Her work on Karl Liebknecht includes the book, The Liebknechts, Karl and Sophie: Politics and Family—the most comprehensive study of the life and work of Karl Liebknecht.

Helen C. Scott is an Associate Professor of English at the University of Vermont. She is editor of The Essential Rosa Luxemburg (Haymarket Books) and, with Paul LeBlanc, an anthology of Luxemburg's writings, Socialism or Barbarism (Pluto Press). In addition to her monograph, Caribbean Women Writers and Globalization: Fictions of Independence (Ashgate), she has published articles in Callaloo, International Socialist Review, Journal of Haitian Studies, Postcolonial Text, Socialist Studies, and Works and Days and chapters in several postcolonial collections.

Watch and listen: Deborah Eisenberg brings the letters of Rosa Luxemburg to life

Deborah Eisenberg to read from The Letters of Rosa Luxemburg